This is Marie, contributing an article about Farm Burger Dunwoody, a recent addition to the franchise that we first visited in Decatur three years ago. We wound up there because of an unfortunate rebellion on the part of my car which required Grant to pick me up from the repair shop to which it had been towed. The baby in particular was totally thrown off and spent some time in the car sobbing that he wanted “eat-eat!” It’s hard to explain to someone with a still-limited grasp of English that although we needed to stop at an unnamed fast-food franchise to take advantage of their changing table (sorry, anonymous restaurant – I will have lunch with you sometime soon to make up for carrying a bellowing unhappy baby though your door) we were not stopping there, and the fries he would get at the actual location were going to be eating are better in all possible ways. And luckily we do keep a few munchies in the diaper bag for situations like this.

We arrived at the restaurant to see a fair crowd and a rather daunting line, but once in it were pleased to see how efficiently and quickly the line was being processed. I have to admit that I spent much of the time in line not figuring out what burger I wanted to eat, but rather talking myself into an ice cream indulgence. You see, this Farmburger has a branch of Morelli’s inside. And although it is clear that Farmburger could use the additional seats that the ice cream station takes up, the business it attracted was keeping two teenagers hopping for the entire time we were there and clearly worth it. Of course I had a hard time concentrating on the burgers when ice cream awaited.

We got a bucket of fries and a burger apiece, except for the baby, who was not interested in burgers at all. He missed out because these are really good. When the server delivered ours, the ones ordered by Grant and the girlchild were handed out with a confident identification of the item, but when it came to mine (adorned with only a slice of their how-do-they-get-them-so-good winter tomatoes) I had to help by supplying the name “minimalist burger”. I don’t think they are used to customers getting a basic burger when there are so many options that are truly lovely. I had actually wanted the burger with the 2-year-old white cheddar and then decided that since there would be ice cream, cheese would be just a bit much to add to the mix.

So I am afraid that the burgers, although ostensibly the reason for our visit, would be slightly overshadowed by the dessert due to absolutely no fault of their own. The baby ate quite a few of our fries and appeared extremely pleased with them, but the fun part came when my order of a salted caramel shake (the girlchild), an Abita root beer float (Grant) and a “Chocolate Chimp” (me and the baby) arrived. 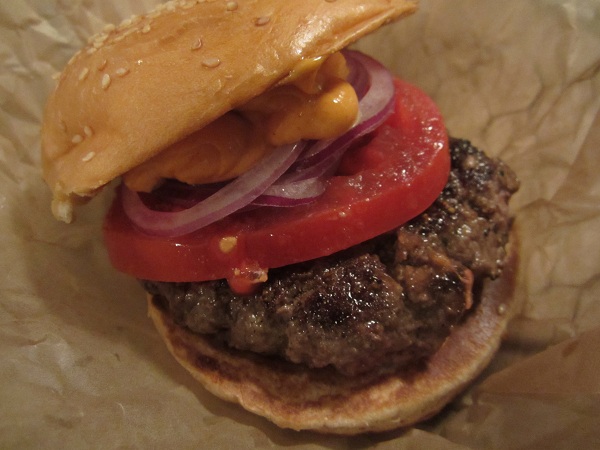 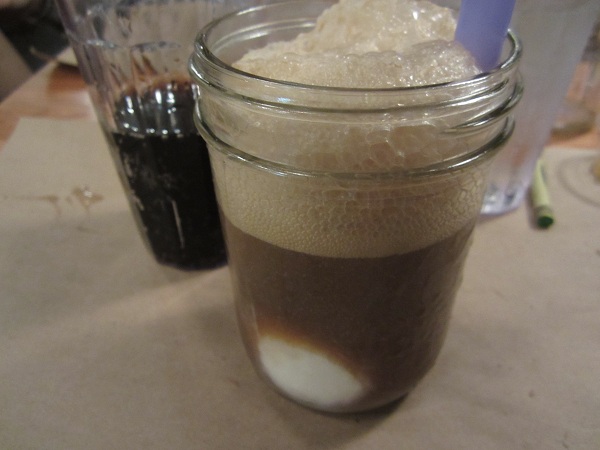 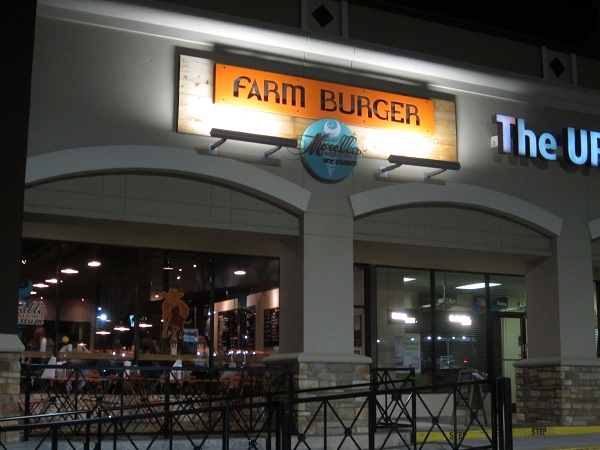 I’d had a routine by Bill Cosby involving chocolate cake running through my head (Here, in case you somehow haven’t seen it) ever since I saw the Morelli’s sign on arrival, and considering the grumpiness involved in the car repair I just had to succumb. After all, chocolate banana shakes have cream, and milk, and bananas. That’s nutrition! The boy took a sip of my shake and then dove onto the straw with the fervor of a boy who’d been starving for years. I am pretty sure he drank half of it in one go, prompting an emergency removal due to the danger of brain freeze. My husband, seeing this, started providing color commentary on his completely over the top enjoyment. He then started offering spoonfuls of foam from his float, which caused the boy to go wide-eyed and open-mouthed.

“What is this magical substance?” Grant asked on the baby’s behalf. “It is foamy and sweet and vanilla-y, and then if you use the straw it’s bubbly and brown, and then Daddy puts his spoon in it and woah, what is this? There is ice cream! There is ice cream in this crazy stuff! Wow it’s the best glass of anything EVAR!”

There was more of the same, causing us to break up constantly. Considering the high proportion of kids in that section of the restaurant all eating ice cream along with us, I can only hope that they enjoyed our production. Daniel liked the small taste of the salted caramel offered by his sister too, but luckily for sibling rivalry issues, once he encountered Grant’s float he had only intermittent attention for anything else. There are times like these when I realize he is definitely his father’s child. As far as I am concerned, this Chocolate Chimp is now the standard against which all other chocolate banana shakes shall be measured.

Other blog posts about Farm Burger (some more recent ones, among many):