It is so good to know that we’re not the only ones who overplan, lay out our meals and set off on road trips with a stack of printouts from Google Maps. I did a little reading before we went to lunch with our friends Helen and Vincent at a Malaysian and Thai place called Penang and found a fun, albeit sadly dormant Boston-based blog called Sea Salted (linked below). Kate, the writer of that blog, confessed to the same habit. After I finished reading her recommendations about what to try at Penang, settling on the Crispy Golden Fried Squid, I enjoyed reading the rest of her road trip story. I’m sorry that she’s no longer writing, but I’m sure she’s doing well. She has the right mind set.

This Penang is one of several in various cities that are run by various members of one large family. The owner of this one, whose name is Ken, explained that each is run as an individually-owned restaurant despite similarities in the menus, and, in the case of Atlanta, the signage. There is a second Penang located much closer to us in Kennesaw, and if it’s anywhere as good as this, then we’ve been depriving ourselves by not stopping by after all this time. We heard an anecdote after we visited that the chefs of the two Penangs enjoy a spirited rivalry over each other’s cooking, so the experiences could well be quite different! 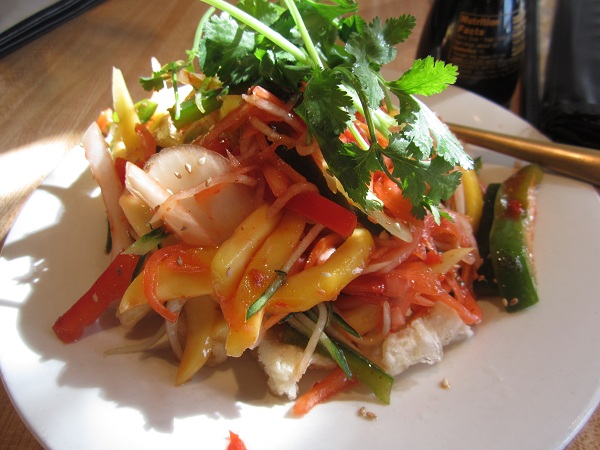 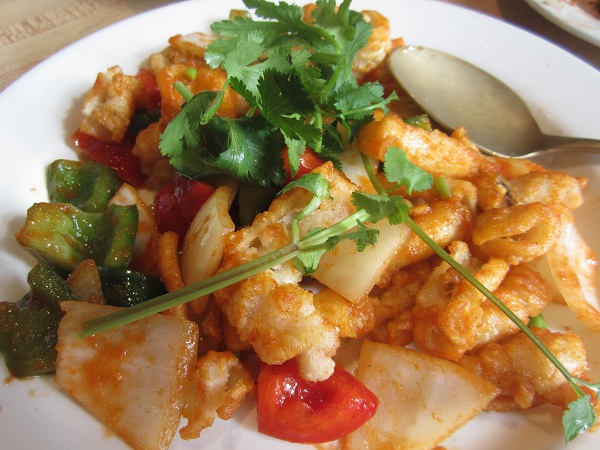 We started with a couple of orders of Roti Canai to share. This is similar to the naan that you might find at an Indian restaurant, but also a bit like a crepe as well. It’s served with a curried potato and chicken sauce to dip, and that is indeed every bit as curious and pleasing a mix of flavors as it sounds. We also shared an order of Thai Mango Salad, which features shredded mango and squid in a sweet and spicy barbecue sauce. 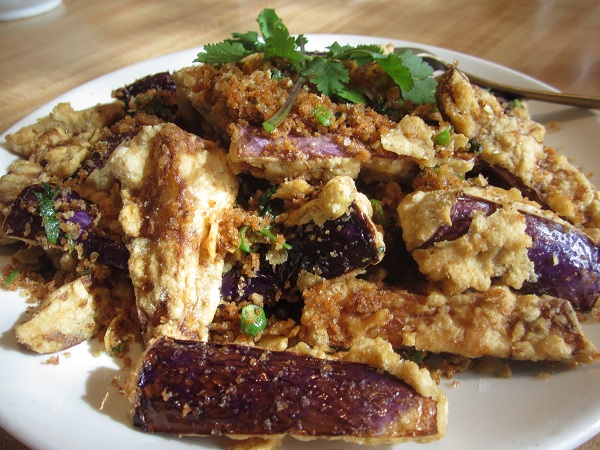 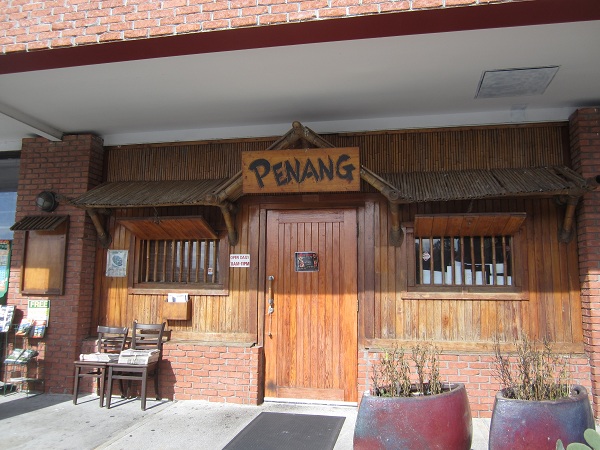 Everybody enjoyed their lunch a great deal. I’m glad that the squid dish was as wonderful as I had hoped. It was mildly spicy, with some chili powder dusted over perfectly fried pieces of calamari served with onions and peppers. Marie had the Green Nasi Lamak, which is coconut rice with a ginger sauce fried with vegetables, chicken, and shrimp. This was a huge amount of food for only eight dollars.

Vincent ordered rendang, a dish that seems to generate a little controversy among novice foodies like us. Rendang tastes reminiscent of curry, and lots of people – like me! – make the mistake of thinking them synonymous, but the preparation is quite different. Rendang is cooked very slowly in coconut milk and spices. Wikipedia’s unbelievably detailed page on the dish suggests that there’s an authenticity! culture surrounding rendang, and its cousins gulai and kalio, that makes the double-zero-only Neopolitan pizza police seem like a bunch of laid-back potheads.

But as much as I enjoyed my squid, I think that Helen ordered the table’s most interesting dish. Sambal Terung is sauteed eggplant, served with onions and peppers and a heavy dusting of spicy caramelized shrimp paste and brown sugar. I’ve never enjoyed eggplant as much as this.

This is really a fun restaurant with a pretty large menu. Honestly, it’s one of those places with so many unfamiliar entrees that it might be easy to get overwhelmed if you aren’t comfortable with Thai or Malaysian cooking, but it’s definitely worth trying. Go with friends, start with the Roti Canai, and sample as many things as you can.

Other blog posts about Penang:

One thought on “Penang, Chamblee GA”