As our regular readers know, we have been exploring the cuisines of other nations by focusing on Buford Highway in recent months. If you check out the category from the link above, you’ll see that, as of this post, we’ve now given a short spotlight to 20 restaurants across 17 chapters and are nowhere close to denting this corridor. So I was very pleased when I got an announcement about a new Meetup group that is also tackling this popular street, with dinners planned for maybe three or four times each month. Sadly, we have run into babysitting or scheduling issues for the next couple of get-togethers, but we hope to do this again soon.

The first outing that we were able to attend was originally scheduled for Cho Sun Ok, a popular Korean barbecue place just north of the perimeter. Unfortunately, they either changed their hours or our organizer, David, hit a language barrier when he made the initial reservation, because it turns out they are not open on Wednesdays. Fortunately, he phoned to confirm that reservation, learned about the mix-up, and found a new location for us. Eight of us met at Han Il Kwan, just inside the perimeter, and it was a real treat.

We shared a couple of appetizers to get things started while waiting for the charcoal and the banchan side dishes. These included a plate of Jin Mandu, which are dumplings that reminded me of the gyoza that you can get in some Japanese restaurants, but the real winner was the Haemul Pajan, a big pancake or crepe filled with peppers and seafood. This was really flavorful and went really well with the hot sauce. 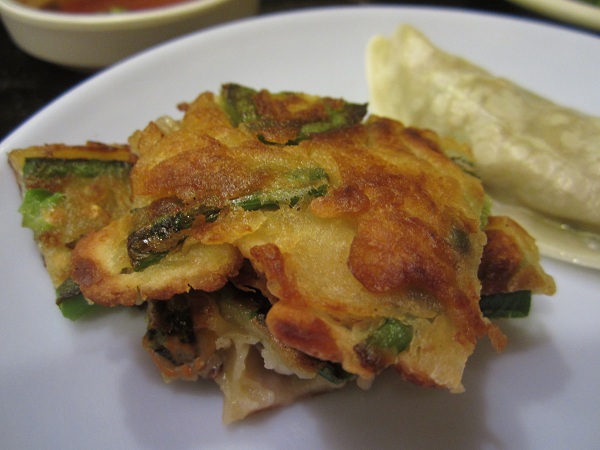 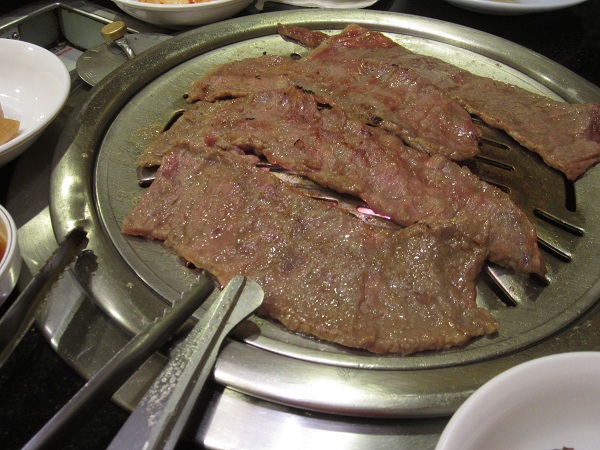 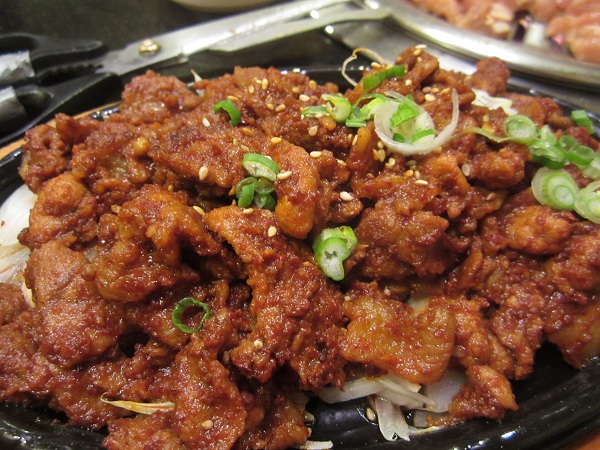 But we were there for meat, and my heavens, did we ever share some good stuff. We have only had Korean barbecue once before, at Hae Woon Dae a few months ago. Comparing the two, I think that we enjoyed much better banchan at Hae Woon Dae, and that what they sent out here was bland and not very inspiring. But who had time for banchan anyway with all of this great meat? This was tremendously good food.

Unlike our previous experience, some of the selections here are not prepared at the guest tables, but in the kitchen. For people who’d like to place their food straight from the grill into a lettuce wrap, it is specified on the menu where each entree will be cooked. So we didn’t get to see them grill the beef (bulgogi) or the really terrific spicy pork (dae ji bulgogi), which are done out of sight. However, the short ribs (gal bi gui), pork belly, and the two orders of chicken (dak bulgogi) were cooked in front of us. Everything was fabulous, with the pork the apparent favorite of most of the table. To put it simply, I think that each of the meats was more flavorful than what I was expecting. Hae Woon Dae was pretty good, but this was much, much better.

We really enjoyed the meal, and making the acquaintance of some new people. Seven or eight is actually a really good number for a setup like this. Grab several friends and plan to spend $30 or so a head, and see what I’m talking about.