This is Marie, contributing an article about our recent adventure on the outside-the-perimeter side of Buford Highway, visiting the venerable Hae Woon Dae. We took a trip out there with one of our fellow foodie bloggers, the always-fun Leslie from The Food And Me at a place of our own choosing rather than at an invitation, so we could make a social evening of it.

I like Asian food (except for Indian) more than Grant does (except for Indian) but this was a new and interesting experience for me. We had the “barbecue” which is nothing like the southern style pig roast. No, this was interestingly marinated meats with lots of little bowls on the side, cooked over a flaming pit in the center of the table. Clearly it was rather less baby-friendly than most places we’ve been, especially since the table wound up getting quite lopsided as we moved things farther and father out of his reach. While he did seem to enjoy the meat, I didn’t feel comfortable offering him anything else on offer, and hope the restaurant understood that he had a separate portion brought from home. I always feel slightly guilty serving up something from my bag even though I know intellectually that he is totally not ready for kid’s meals yet. 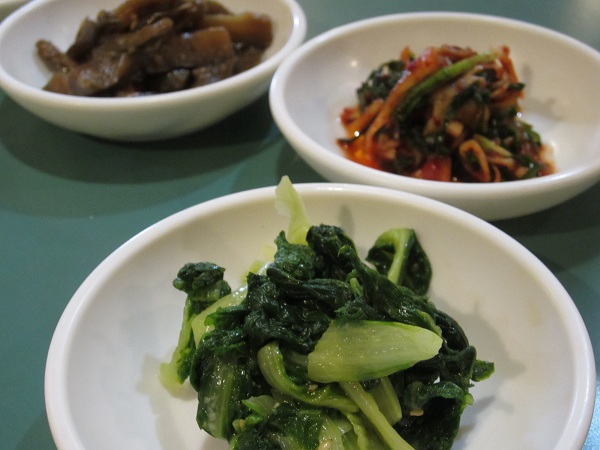 We chose to mix and match three main dishes after consulting with the server who gave us the most popular choices. We chose numbers 3, 6 and 7 out of the list: “Bul Gogi” beef, which was a mild dish that although it had red pepper flakes in the marinade was nevertheless quite baby-friendly and he liked it quite a lot; “Dak Yang Nyum Gui” chicken, which was delightfully tender and flavorful (also the spelling may not be quite right, as the camera cut off the last letters of the name), and “Dae Ji Bul Gogi” pork, which was quite a bit hotter than the first two and voted as the best by Leslie and Grant. The meat is served on a central plate; you then take a lettuce leaf, load it up with condiments and pickled vegetables, finish it up with meat, wrap it up and hope the juice doesn’t make it down your wrist before you can grab a napkin. 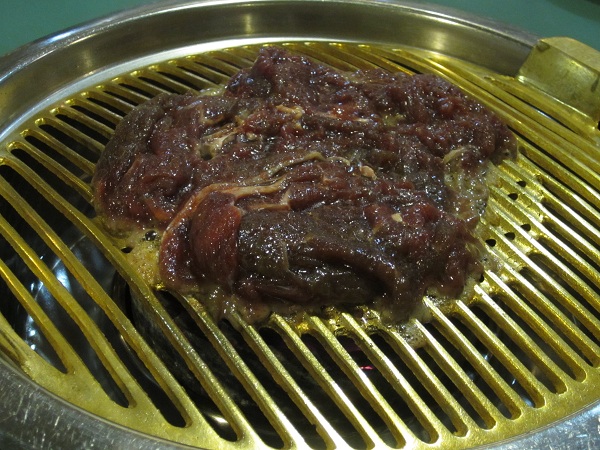 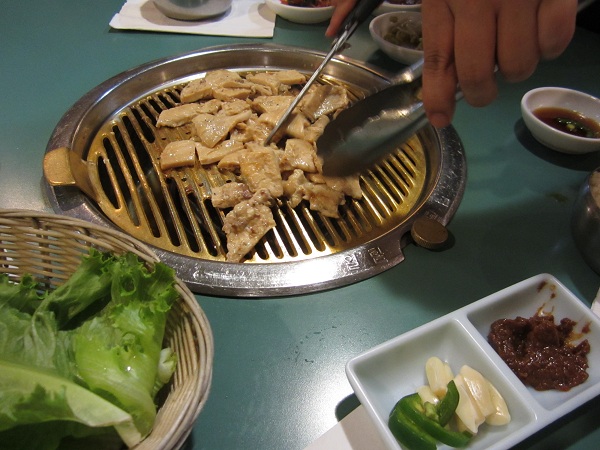 The dinner itself was from a tradition where everyone passes the bowls around the table to share. This is not the kind of meal to attempt with fewer than three people; I figure that our group was an absolute minimum size and four (full-sized) would have been better. Unfortunately I missed quite a bit of the layout of the side dishes (banchan) and condiments, so I wasn’t entirely sure what anything was. There appeared to be some confusion over something that was probably a kimchi turnip and not some sort of crunchy white tuna and/or radish. My favorites were a mysterious green rather like braised kale, and some mildly pickled sprouts.

The way the food is served is sequentially, with a pause between each of the items. So unless everyone at the table really, really likes something, it would likely be a good idea for everyone to pick a different item. In our case the serving staff chanced to serve in the order we liked them from least to most. They drop the meat onto the hot pit and turn it quickly, cutting with scissors to get the larger pieces down to size as the meat is nearly done. It’s quite fun to watch and Leslie accidentally caught a photo of the baby grinning at the process during one of the periods when he was at the table. 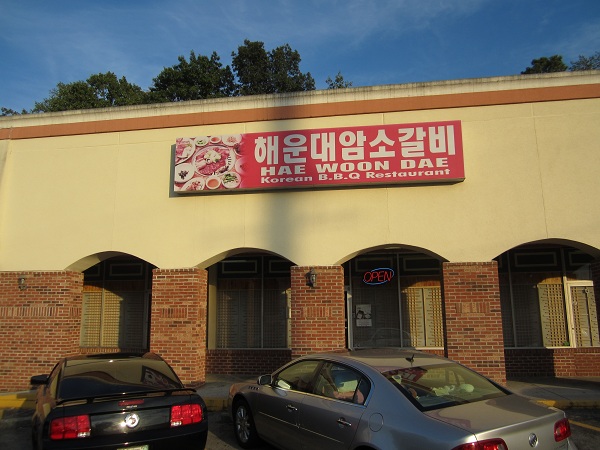 Unfortunately the baby was quite wigglesome that evening, and each of us spent a good bit of time chasing him around an empty side dining area so he wouldn’t be loud and disturb the other diners. While I am sorry for the restaurant that there weren’t many people visiting at the time, I am quite grateful to have had an opportunity to give the boy some time to burn off his energy. The word is that this restaurant is past its peak, and though we had a good meal in comfortable surroundings, it was a bit empty. I don’t know what this restaurant used to be like at its peak, but the food was good and well presented. It’s definitely worth a visit, though next time I’d go without our baby so I would be able to hear the explanation of all the sides.