Generalizing a little bit here, but if bloggers and hobbyists tend not to be that interested in chains, then barbecue bloggers are ten times tougher on them. The sadly-abandoned Gentleman’s Guide to Swine Dining had a term he used, “the franchise curse.” We all know what he was talking about.

A couple of years ago, I’d heard that the Alabama-by-way-of-Colorado chain, Moe’s Original Bar-B-Que, had opened a location in Atlanta. It’s on 14th Street west of the connector, about a third of a mile past The Silver Skillet and across the street, in the building that once housed Kool Korners. It didn’t seem like anything that I needed to rush to try in Atlanta. One of these days, I’d like to make another trip to the Birmingham area and visit the original Jim ‘n Nick’s, and the original Golden Rule, for example, but I’m just not all that interested in franchises.

Shut my mouth. Seriously. Shut my mouth. This place’s PR company reached out to us to give them a try, and we had a downright excellent meal here. This was the best barbecue we’ve had at any of the places that we’ve visited in about the last two months. We were missing out on something terrific. 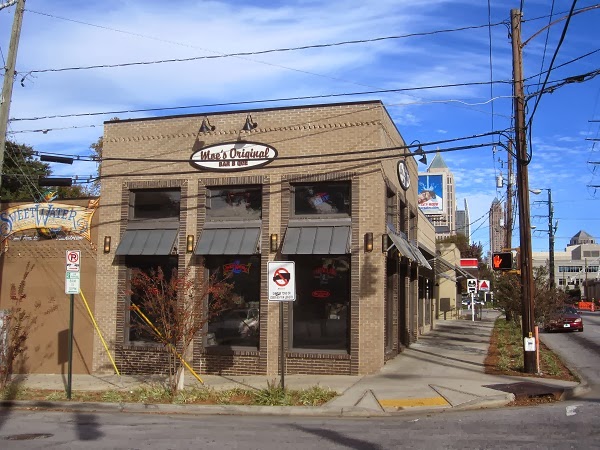 Preston Smith and Brett Mancuso own this location, the only one in Georgia. Smith explained that the chain has 26 stores. Eight of them are in Colorado, where the chain’s owners, Mike Fernandez, Ben Gilbert, and Jeff Kennedy had all moved – Fernandez to go to culinary school – after originally meeting in Tuscaloosa, where they attended the University of Alabama. The present incarnation of Moe’s Original has a family link to the first iteration. Moses Day and Gabo Fernandez, Mike’s brother, opened Moe’s in Northport, a suburb just north of Tuscaloosa, in 1987. The restaurant had a run of about five years, but Day’s legendary skills as a backyard pitmaster – he evidently smoked over a coal-and-wood filled barrel – preceded the brick-and-mortar store and carried on after the business closed.

Day passed away in 2003, by which time Fernandez’s brother Mike had hooked up with Gilbert and Kennedy in the town of Vail and began selling Alabama-styled barbecue through their catering business and, eventually, a concession stand and finally, in early 2003, their first restaurant. They expanded slowly in both Colorado and Alabama from 2004-2010. The Tuscaloosa franchise is owned by John Moss and, bringing it all back home, Gabo Fernandez, who started the original business with Day in ’87. Their first store outside these two states opened in Asheville in 2010. They have also opened in Hendersonville, Charlotte, Nashville, and, of all places, Bangor, Maine. The Atlanta store opened in the spring of 2011.

Smith showed us their huge Ole Hickory brand indoor smoker, which takes up the bulk of the kitchen. He uses white and red oak and smokes the pulled pork for seven hours, the ribs for three, and the turkey and chicken for about ninety minutes. It all comes out really great. 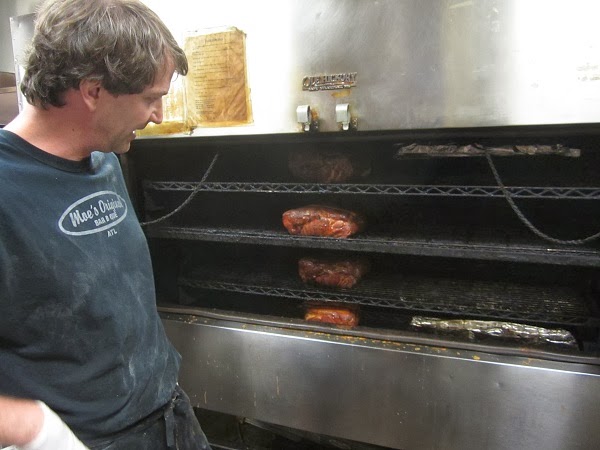 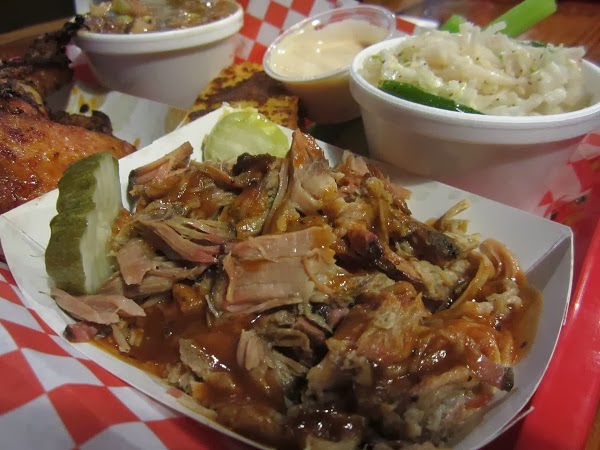 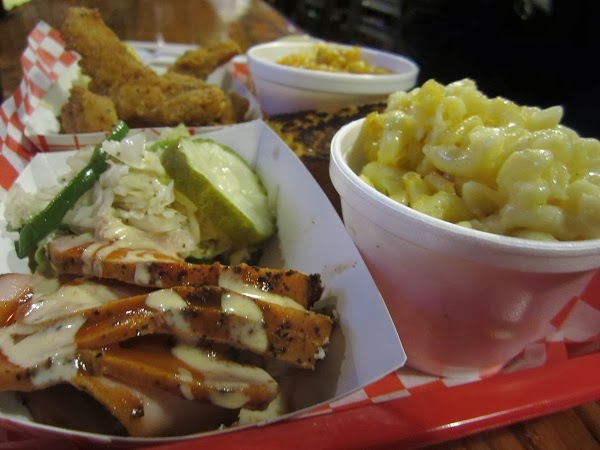 Invited to try out whatever we wished, I went with pulled pork and smoked wings, along with vinegar slaw and Brunswick stew. Marie selected smoked turkey and fried catfish along with mac-n-cheese and a dish of sweet potatoes and corn. Smith also brought a couple of ribs to us to try those out. Well, where to begin? There was so much food, and most of it was excellent.

Typically, the pork, turkey, and ribs are not served dry unless you specify, and the sandwiches come with a mix of slaw and both red and white sauces. The red sauce is a tangy tomato-vinegar-pepper mix and the white sauce is among the best that I’ve tried. They also have a hotter red sauce which I enjoyed more. Happily, they only drizzle a small amount of sauce and don’t drown the meat. I liked all of the meats a lot. The catfish was flaky and crumbly and is served with a yellow tartar sauce, the smoked wings were just tremendously good, the pork and ribs were really satisfying, and while it’s unlikely that any turkey will cure my ambivalence toward that meat, this was as good as I’ve had it anywhere. Marie stuffed herself and I finished off what turkey that she couldn’t. It’s marinated in a rich brew of seasonings before smoking, and then given drizzles of red and white sauce. Marie said that I’d probably like Thanksgiving a lot more if turkey was that good. Hey, she said it; not me.

Each Moe’s Original location has the same main menu, but they are given leeway to develop their own specials for sides under the heading “Moe Special Stuff.” The Brunswick stew was one of these, understandable as Alabama has no tradition of it, and on those rare occasions that it is seen in that state, it’s often called camp stew. I always like noting when restaurants move boldly away from the basic six ingredients of the dish. This had a few potatoes (unwelcome, I sez), and lima beans (uncommon, albeit not unique, and I’m ambivalent about their inclusion) and, strikingly, celery. I’m racking my brain and I don’t know that I’ve ever seen celery in Brunswick stew anywhere. The vinegar slaw was completely terrific. I wish that more places would make it this way instead of with mayo, seriously. Marie didn’t enjoy the sweet potatoes, the only bum note among the whole repast. That’s fine; we had more than enough other very good food and didn’t miss it.

We arrived expecting a pretty good meal and received a really, really good one. This was a very pleasant surprise and a welcome reminder that we don’t need to listen to the stereotypes, to try everything fresh, with open minds and open eyes. We certainly recommend our readers risk the parking issues – very small lot, not much street parking, great big lot full of spaces across the street that you cannot use without risking a tow – and give this place a try. For now, it’s the only Georgia location and, according to Smith, doing really well and getting a good trade from Georgia Tech students (and, on the night we visited, alumni parties). Much as I’d like to exclusively champion our home-grown barbecue, this is genuinely better than many of the locals. (Not all of them; I said many.) If I ever go skiing in Vail, I’d like to pay the original Original a visit. This’ll do in the meantime.

(This was a media event and our meal was complimentary. It’s our policy to always note when we’ve received our meal without charge. If you would like to invite us to your restaurant’s media events, please drop Grant a line at gmslegion@gmail.com .)