This is Marie, contributing an article about a recipe I tried for Apricot Chicken. Grant found this recipe at Yoghurt & Muesli. I had a little difficulty finding apricots in juice rather than in syrup. You might want to check first whether you can find any before planning to use this recipe, or just wait until the season comes back so you don’t have to take out a second mortgage to use fresh ones.

I used more apricots and broth than the recipe called for because I was adding more chicken. The recipe claims to serve 4, but those four would need to have small appetites. This led to having to simmer the sauce down a bit to thicken it up since it’s not suitable for simple doubling, but since that led to a happy accident it was all OK by my book. 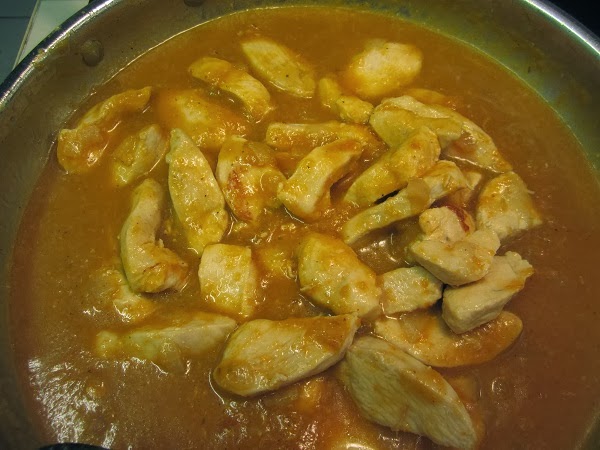 Apricots. Approx 4 cups/600g/10 medium sized. When not in season, use canned apricots in juice (not syrup). (approximately two cans)
2 skin free chicken breasts (three if they are small, or you want more meat)
1 cup veggie or chicken stock
1 medium onion
Black pepper to taste (don’t add salt without tasting – there is plenty in the stock)
Approximately 3/4 cup cashew pieces, or to taste

Slice and saute the onion in a frypan.
Add the chicken breast (also sliced) and brown on both sides. Remove before totally done and set aside (this is to prevent overcooking).
Add stock to pan and deglaze.
Pop the apricots (drained if canned) in a food processor and blend until you get a nice, thick consistency and then add to the pan and simmer until sauce is at your desired consistency; then pepper the chicken and add it, simmering until the chicken is cooked through.
Serve with rice, cous cous, pasta or a big bed of greens, and sprinkle the cashew pieces over each dish just before serving, or at the table (I served with 1/2 cup cooked rice per person and zucchini). 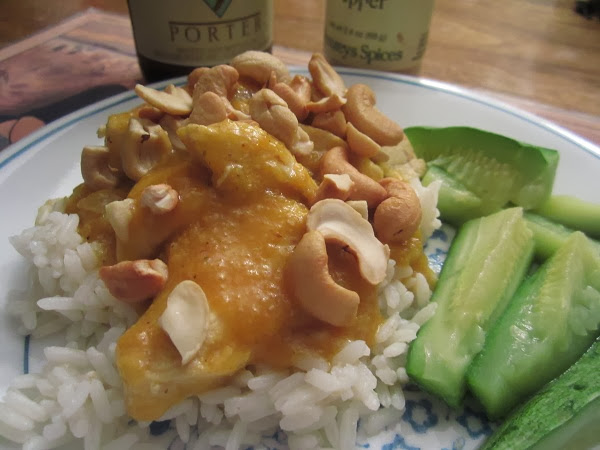 The baby was hungry and impatient and demanded some of everything as the meal was being prepared, so he was confined to his high chair to keep him from making another attempt at endangering his own health by attempting to grab uncooked food. Mom had gotten some cashews earlier in the day and, since he was in the mood to experiment, I dropped a few on his high chair tray to try out, then popped a couple in my own mouth while finishing up the meal. The cashew taste combined so perfectly with the apricot sauce I’d just checked, I immediately took a couple of handsful and put them into a bag to crush and sprinkle over the prepared plates. What a fortuitous combination! Definitely add this to the recipe above but use unsalted nuts to keep from oversalting the recipe.

It might be nice to try the recipe over greens, as one of the serving options suggested. The rice I served it over was utilitarian but a bit bland; it might have been nice to try something with a little more texture and nuttiness. Another change I am considering for next time is chopping up some dried apricots to add to the sauce while it is simmering.