Overshadowing this visit to see our friend Chris in Jacksonville was this unfortunate little incident at his house. See, we thought we had worn out the toddler in the morning. He ate well, got to visit a dinosaur, and spent an hour at a super-fort playground. Then we drove around the city’s southern beltway for the Orange Park neighborhood. He slowly started nodding off. We got to Chris’s place, climbed up the stairs and looked forward to putting him down for a nap, and—

CATS! Chris has cats! Baby went crazy! Oh, good grief, CATS! There would be no napping this afternoon while grown-ups relaxed over card games.

Eventually, we concluded that taking turns in a quiet room with the baby was not working, and never would work, and hours had gone by, and the sun was beginning to set, so we gave up and followed Chris to dinner. He’d picked the local outpost of Hamburger Mary’s, whose original location opened 41 years ago in San Francisco. There are twelve stores in the United States, four of which are in Florida. It’s an “open-air bar and grille for open-minded people,” a gay-friendly, allegedly family-friendly spot with weekend drag shows and a very silly and eclectic look based around their winking mascot, the cartoon character who never was. 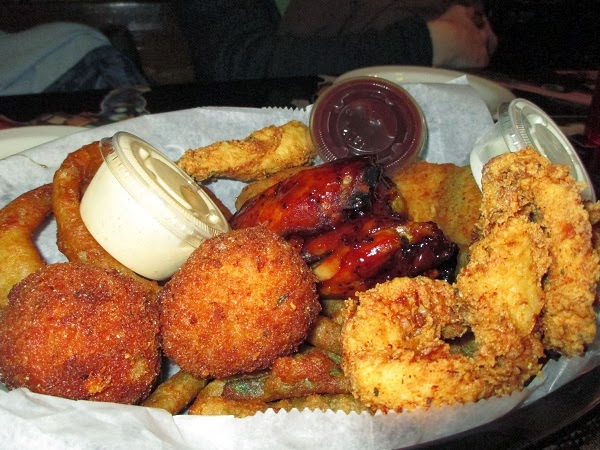 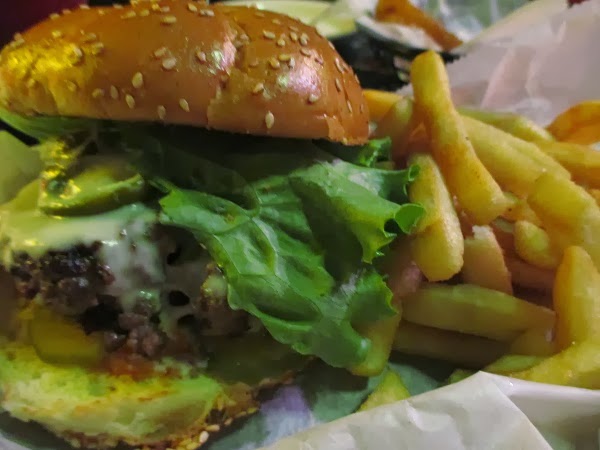 Mary’s is almost a great place. Some of what they do right, they do extremely well. As befits their name, they make really good burgers here. I had a Spicy Mary – “she’s hot and tasty!” – which is covered in hot sauce, jalapenos, and melted pepperjack cheese. Marie just had a basic build-your-own with some simple toppings. Chris, who has dined here several times before, ordered the meatloaf. All of these were very good.

Other things were not. We split a “handbag” sampler of fried, frozen junk, none of it any good, and the girlchild, wanting nachos, was unable to stomach much of the processed cheez-goop that was dumped all over her chips. I was a little discouraged that a place that did some things so well just dropped the ball on so many others. 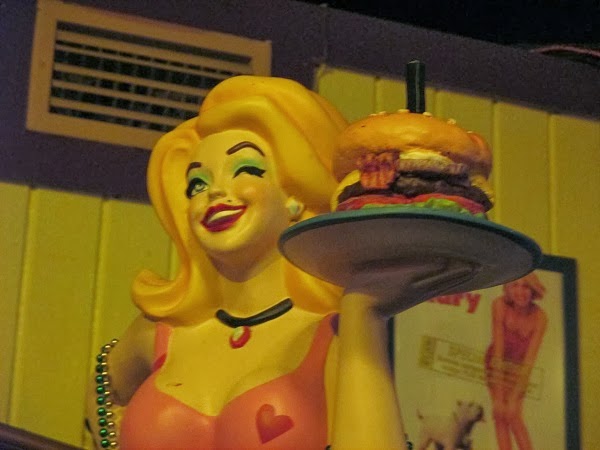 Pushing this restaurant back into the “plus” category: really great service from a gang of men and women who seem to be having a really good time. They get a big mob for the weekend drag shows and strongly recommend you make reservations for those. We were finishing up our meal as the crowd for the eight o’clock show was filling the place. Several of the locals will attend in matching attire, including one party of about twelve who, with their silver boas, looked like a glamorous, younger version of the Red Hat Society.

The girlchild was unhappy with the processed cheez-goop and unhappy that far too late an hour for the baby meant that she was going to miss the cabaret. She told us, in no uncertain terms, that when she is old enough to go out on her own to Florida for Spring Break, she’s coming back here. It’s nice to see that a less-than-perfect experience can still have somebody willing and determined to give a place a second chance.

Other blog posts about Hamburger Mary’s: