A year back, after our last visit to Jacksonville, I was looking at Urbanspoon to make sure that the links to our most recent blog updates for that city looked okay, and somebody had recently posted some photos of the mural on the outside of TacoLu. I took one look and said we’d visit on our next trip to Florida. How could we pass this up? 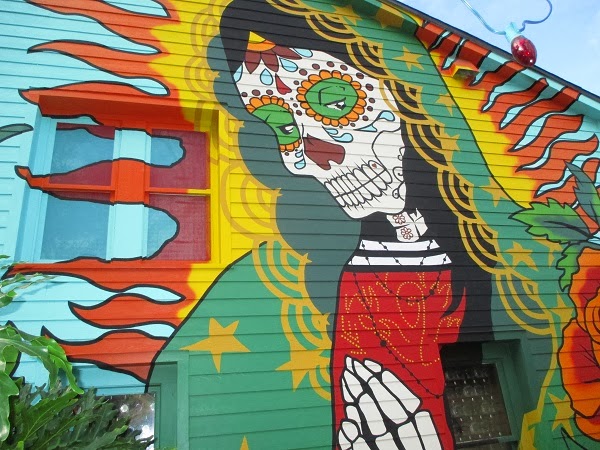 This was an atypical visit, even for us, with our habits of sampling small and moving on. The toddler had not eaten much, but he’s lately been really enjoying fish, so we just ordered some fish sticks from the kids’ meal for him. Marie, while we were looking at the dinosaur that featured in the previous story, suddenly got a splitting headache and lost her appetite. That left the girlchild and me, and we enjoyed some really terrific tacos. She had a couple of TacoLu Verdes, with chicken, tomatillo salsa and cheese, and I had one of their popular Bangin’ Shrimp and one Spicy Bird. They were terrific. The shrimp comes with a fabulously tasty chipotle cream sauce, and the chicken with chile de arbol salsa, and they were really wonderful. Marie missed out. These are super tacos. 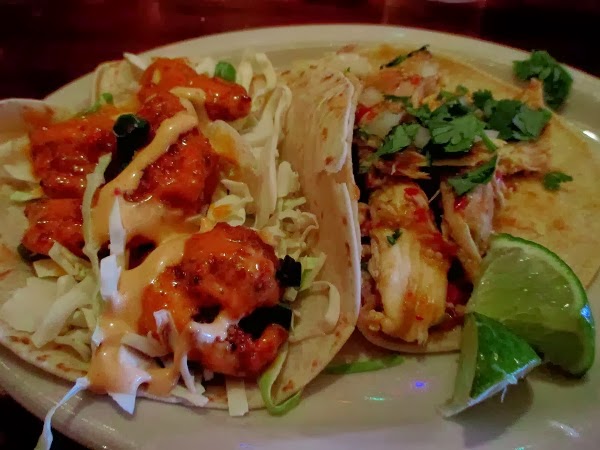 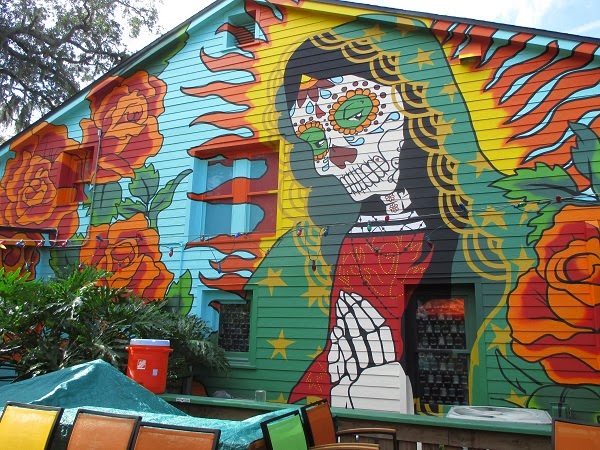 The other thing that made it atypical was that my boss used to work with the sister of TacoLu’s co-owner, Don Nicol, who opened the restaurant with his wife Debbie in 2008. I was asked to pass on her regards from Atlanta, and, after we finished eating, I asked whether Don was free to say hello. Word had already reached him that we were coming by, and he took several minutes out of a busy afternoon to join us and tell us about their awesome restaurant. They had originally opened closer to the beach, but this interesting property came on the market in late 2011 and they moved here in the summer of 2012 rather than open a second location, which was the original plan.

Generations from Jacksonville grew up knowing this property at 1712 Beach Blvd as the home of a big Southern meat-and-three called the Homestead. With seating for 200 in a big, homey building – our room was the historically most popular one, with tables grouped around a giant old fireplace – the Homestead appears very much to have been one of those old places that spent a few decades doing everything right and then entering a long and slow decline. Originally constructed as a boarding house, the Homestead stumbled to a quiet closing in 2007. It was then bought and reopened by Abbas and Judy Bagheri, who gave it new life in 2008 and a more upscale and contemporary menu, but their success was short-lived and the Homestead finally closed less than three years later. Another restaurant called Copper Top moved in very quickly, but they didn’t have any better luck.

Meanwhile, the Nicols had been finding much greater and more consistent success. With an old VW hippie van parked out front, and a mix of Day of the Dead and masked wrestler imagery to keep guests smiling, their 140-seat place further east along Beach Boulevard had been winning rave reviews from the town’s foodies. I’ve seen some pictures from the earlier TacoLu and it’s just as charming and fun as the current incarnation. I love it when restaurant owners really embrace good design and playful imagery in their business. I think those have as much to do with the great food in making sure guests are relaxed and having a great time.

After we finished eating and enjoyed a little walk around the property with Don (who, full disclosure, sent us off with masked wrestler athletic bags for the kids), we drove a little further out into this small suburb and let the baby go wild for about an hour at Sunshine Playground, a tremendously huge fort for kids, one of about the three largest that I’ve ever seen, in South Beach Park. We always want to visit new places, particularly when we are traveling, and don’t get all that many chances for repeat visits. But when we are next in Jacksonville to spend some time with Chris, we will want very much to come over to Sunshine Playground again, and we’ll need something to eat, and another trip to TacoLu is very, very tempting. There is a lot more to be sampled here.

Other blog posts about TacoLu: