This is Marie, contributing an article about Everyday Organic, a restaurant in Greenville that is, sadly, much too far away. I really enjoyed my meal there and would have very much liked to try more of their offerings.

I saw they had free range egg salad and knew I’d have to get the sandwich. Eggs from birds that live in a box are just not the same. I don’t have the budget to eat wholly organic (either in time or money – you don’t have to put in both, but there is a definite investment) but I’m totally willing to shell out $4 for a dozen when the taste is so much better – even leaving out the lifestyle of the chickens that provided the eggs. The options for bread included sprout wheat, which I hadn’t had before and decided to try; it made a really nice tender toast to carry the egg salad. The sandwich definitely lived up to my expectations, with one exception; it was far bigger than anticipated. If we’d lived closer I’d have taken home half for leftovers. I also took the spinach, pesto & green pea pasta salad in the mistaken impression that the boy was hungry and would want to share with me. Instead, he chose to have a tiny no-nap-related meltdown over whether he could eat ALL. THE. GOLDFISH. He probably didn’t have room for actual food once that was accomplished. 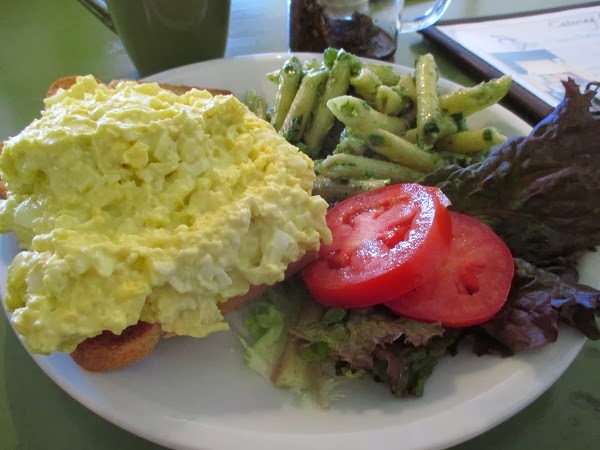 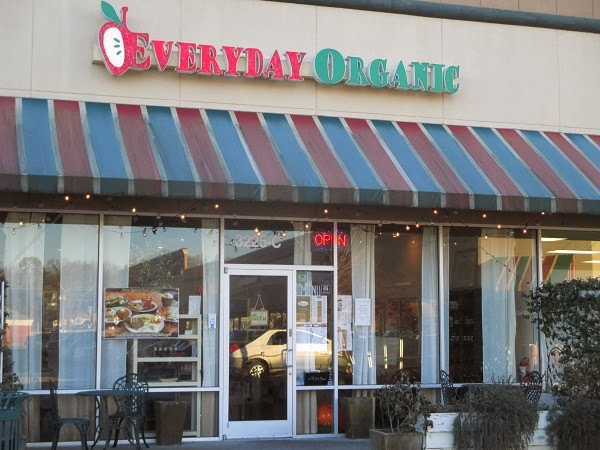 I did feel rather guilty taking processed snack crackers into this place. Although it is quite clearly a strip mall location, square and rather boxy, the owner has put potted plants in a pleasant arrangement outside the door, and made the best of the interior space. There is a bakery display which I didn’t photograph because it had been picked over pretty well by the time we arrived, but I rather yearned after the blueberry pie there. They make the pies vegan-friendly, which I thought was quite considerate. Although I am (clearly) not vegan myself, I do sometimes not want to be as carnivorous, and notice when the options for non-meat-eaters are tasty, or alternately when they are limited to steamed broccoli that you have to ask not to have butter put on.

I accompanied my meal with a tea made from a roiibos mix that included lemongrass. Here is a photo from their Pinterest feed with the tea selection. You will get a generous helping of whatever you select, and will be offered a refill of hot water.

They are just starting out, with one location that opened in 2010, and the owners are Breighanna and Taylor Newnham. They are planning on another location soon, though certainly not one as far away as Atlanta.