If you’re like me and rarely fly, you probably have a deeply outdated and awfully unfair stereotype of what airport food is like. I think of arriving in Muncie at 10.05 and wishing for a slice of microwaved pizza. Well, last month, I got to join a pile of my friends old and new from the Association of Food Bloggers to go behind the security gates at Hartsfield-Jackson to see how airport dining has improved since the last time that I flew.

No kidding, the last time that I set foot in Atlanta’s airport, Maynard Jackson was still alive and it was just called Hartsfield. 9/11 hadn’t happened yet, so anybody could go to any concourse and just hang out. And the train that took you to those concourses had a robot announcement voice that was like a Cylon from Battlestar Galactica. The one with Lorne Greene. 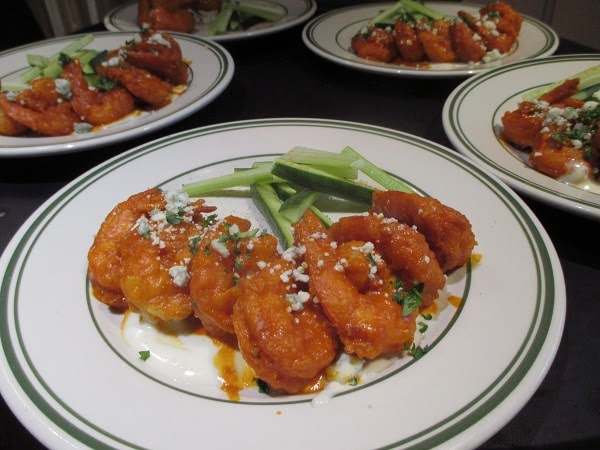 Anyway, the good people at HMSHost were ready to explode some stereotypes and preconceived notions, and our group started in the pre-security atrium at the Atlanta Chophouse. HMSHost manages airport and turnpike dining at more than a hundred locations, and the small Chophouse chain is one of their reliable concepts. It originated in Denver – the original is across the street from Coors Field, home of the Colorado Rockies – and it’s been popping up in various airports under HMSHost’s eye. It has a good reputation as a destination for really great steaks, and so the private dining room at Hartsfield-Jackson’s location is often used for fly-in business meetings. Since it’s before security, you could have a local team meet here with visitors from other cities, enjoy a good steak, get your papers signed and notarized, and fly everybody home painlessly.

We got to sample some wines and some appetizers, including some splendid ahi tuna and some magnificently addictive buffalo shrimp, before we had to move on. I’m not kidding about the addictive part. Knowing that we had many more things to sample down on concourse F, I think we each tried to limit ourselves to maybe three apiece, but they were just too darn good to quit eating.

Unfortunately, the rest of what we got to experience was behind security, and only accessible to people who have a ticket to fly. But that’s the remarkable thing: HMSHost has partnered with several celebrated Atlanta restaurants to put them in the airport, giving fliers with a layover the chance to sample a very good local meal without shelling out for a hurried taxi to someplace and back. (There is a fun thread on the subject over in the Roadfood.com forums.) 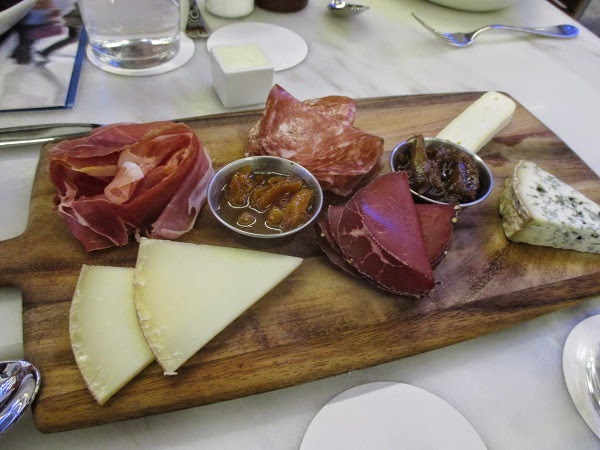 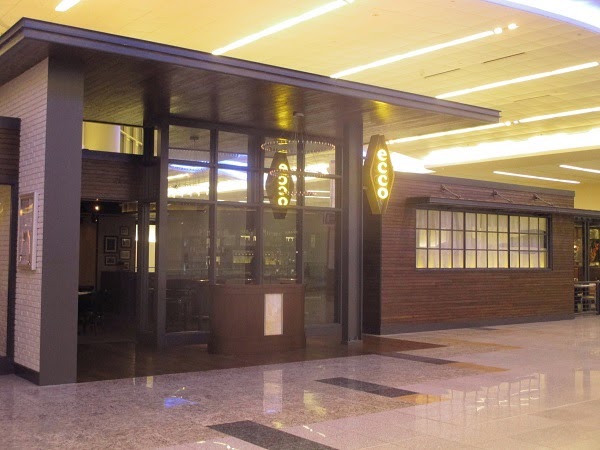 Concourse F hosts the international gates, but you needn’t be flying as far as another continent to enjoy the food. All you need is about an hour or so between flights from any gate to pop by and try something from Ecco, the much-praised joint in midtown that opened in 2006 and has been winning raves for its small plates and European-inspired food. (Dozens of bloggers have written about Ecco; here’s Atlanta Restaurant Blog‘s take.) They shared some cocktails and a meat and cheese tray with us as we arrived, and then sent out some amazing little appetizers.

Everybody was raving about the little balls of fried goat cheese, but I was most impressed by the stuffed peppers. These are piquillo peppers stuffed with braised beef short rib. Oh, my. I could have gone home right then completely happy, but they had another treasure to share first. 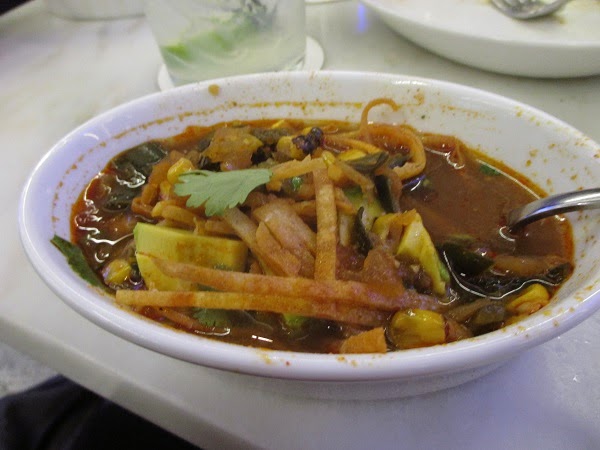 Ecco is owned by Fifth Group Restaurants, and just two doors down, one of their other concepts, The Original El Taco, has a stand. They sent down this downright unbelievably good tortilla soup. Wow. I don’t often find soups that I enjoy all that much, but I would happily order this again should the road send me to Original El Taco’s place in Virginia-Highlands. This is so rich, and perfectly seasoned. Not too spicy, but with just a little bite, it’s a really wonderful soup. 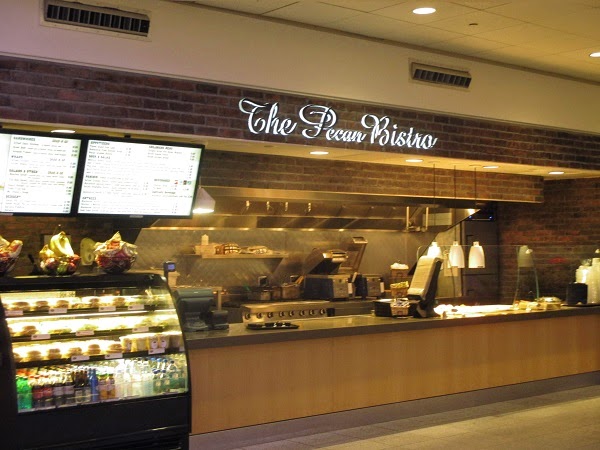 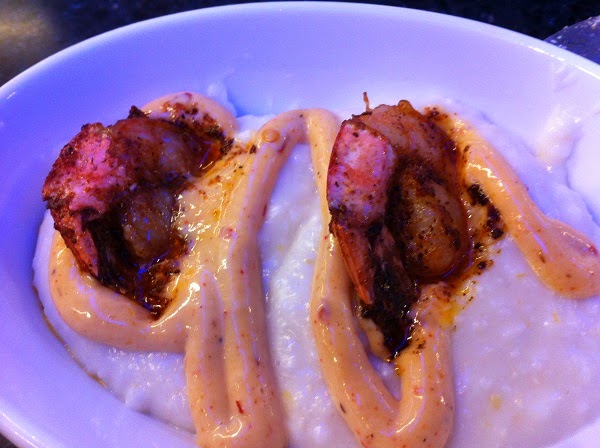 Between Ecco and Original El Taco, there’s a stand from the lesser-known Pecan, which opened in College Park about eight years ago, bringing upscale dining to a neighborhood quite lacking in high-end destinations. Executive chef Tony Morrow had previously worked at Pano & Paul’s, and last year, he opened up a barbecue restaurant nearby which has been on my to-do list for a while.

This place sent us out a small order of chicken and waffles – a single finger and a quarter of a waffle, not bad at all, but the waffle was a bit dry – and some truly good shrimp and grits with a chipotle sauce. Pecan offers an “upscale southern” menu similar to, say, JCT Kitchen or Empire State South, but its location in this distant southern suburb seems, perhaps, to keep the more travel-averse hobbyists away. The shrimp and grits were really nice, and I have had far worse. Pecan may be another place worth visiting sometime soon. Perhaps one day I can stop by both of Morrow’s restaurants in one go. Any great record stores in College Park between them, I wonder…? 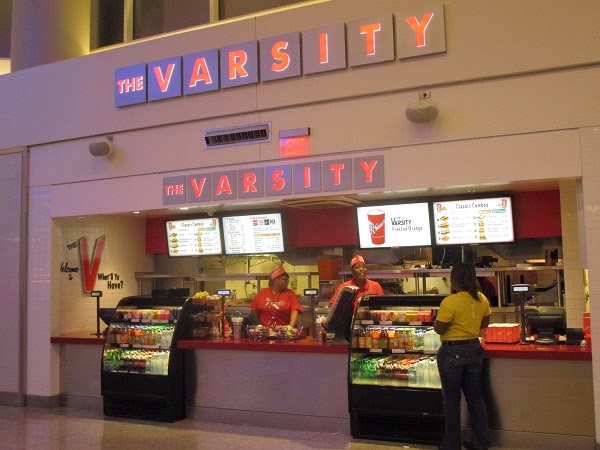 While it can be fairly said that none of our party was still hungry after so much food in such a short time, desserts were provided. The Pecan sent over slices of a pretty good pecan pie, and The Varsity sent everybody both a small chocolate shake and a small Frosted Orange. Of course, The Varsity is one of Atlanta’s most iconic restaurants, and so I’m glad that when they went looking for local specialties, they reached out to one of our best-known places.

I don’t believe that anybody had room to finish either drink, but really, who could say no to a few sips of a Varsity Frosted Orange? We loaded up, made our way back on the train, and then I had a really, really long train ride home on MARTA before the last leg in the car. It was a very long night, but what a delicious one!