Florence may be a small city, but it has a few larger-than-life characters. One of the most fun characters is a fictional one. “Ricatoni Valentino” is the alter ego of restaurateur Rick Elliott. In the mid-1990s, he opened a very popular Italian-themed restaurant called Ricatoni’s, which is still packing in the downtown crowds. Elliott has starred in several dozen very silly, very knowing zero-budget commercials on local television, adeptly parodying all of the clueless zero-budget ads that fill the airwaves of small-market teevee. While hawking his restaurant, “Ricatoni Valentino” has lip-synched old hit songs, run a psychic hotline, and offered tips to financial freedom.

Not content with one very successful business and one goofball alter ego, Elliott began working up plans for a sister restaurant in the mid-2000s. City Hardware finally opened in January 2012 and it is fantastic. It’s modern American – slash – new Southern, with a menu comparable to, say, Empire State South or JCT Kitchen in Atlanta. Marie and I really enjoyed our supper here a lot. This was the second of five restaurants that we tried that were part of Florence Restaurant Week, and our favorite of the five. 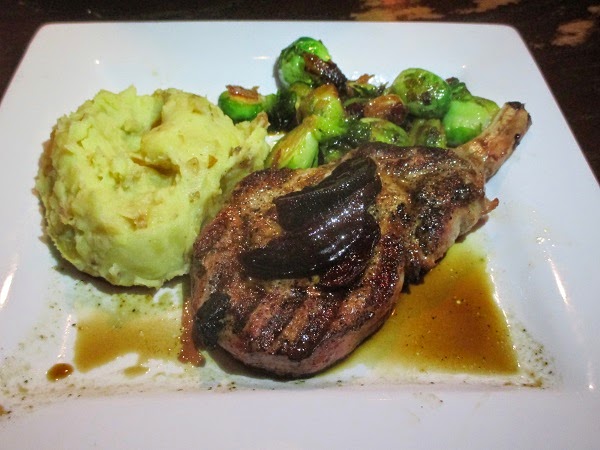 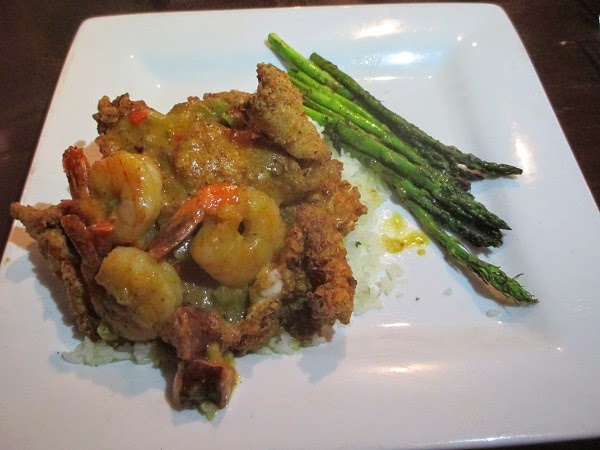 We arrived at seven and met up with Lauren and Steve from the really fun blog Old Red Boots. They’d come down from Nashville for the event and we were so glad to meet up with them, get some good photography advice, and share some shop talk about our hobby. Perhaps even better, the toddler was really being a pleasant sweetheart this evening. He can kind of be a little unpredictable, and since this is a very nice restaurant that people look forward to visiting for nice nights out, we really didn’t want him to try to spoil anybody’s meal by being as grouchy as he’s been a time or two lately.

Marie and Lauren each ordered the best pork chop in the entire world. It has a brown sugar glaze and is served with little slivers of apples cooked in balsamic vinegar, and served with caramelized onion mashed potatoes and better Brussels sprouts than any you’ve ever had before. The meat was so juicy, and those apples were so sweet and tangy and complemented the grilled pork chop absolutely perfectly. 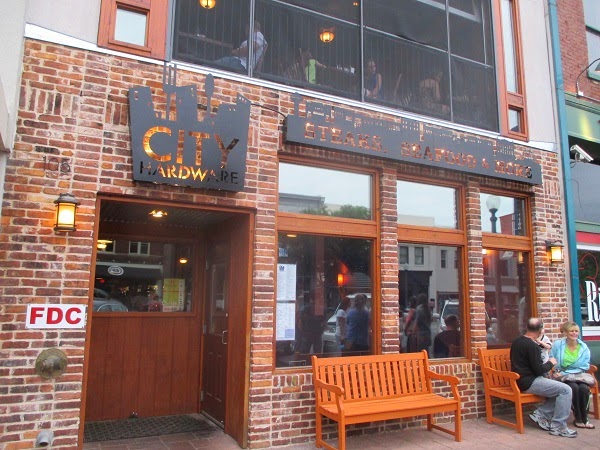 Steve and I each ordered the pecan-crusted catfish, and I’ll boldly state that it was even better than the pork chop. It’s a tender, melting-apart filet served over rice. It is topped with a slice of Andouille sausage and a couple of sautéed shrimp. This is normally accompanied by an order of steamed broccoli. I substituted roasted asparagus instead. I felt that it needed just a little salt, but I’m weird that way, and like asparagus to be saltier than anybody else does, but it was cooked perfectly.

One of the many things that helps set a restaurant apart from its competition is simply attention to detail. Even down to the order of chicken tenders that we got for the toddler, it really felt like everybody in the kitchen was focused on making absolutely certain that every part of our meal was perfect. Other highly-regarded dishes here include the shrimp and grits, the fried green tomatoes, and, surprisingly enough, sushi, which I’m reliably told is quite remarkably nontraditional and wonderful.

If this restaurant were in a larger city like Atlanta, it would have mobs of hobbyists raving about it. Far away in Florence, however, it’s the perfect example of a hidden gem. I would love to return some day and try a few more things on the menu.

(As noted, this was a media event held by Florence Main Street. A portion of our meal was complimentary, and accommodations were provided. It’s our policy to always note when we’ve received our meal without charge. If you would like to invite us to your restaurant or your city’s media events, please drop Grant a line at gmslegion@gmail.com .)