This is Marie, talking about a recipe that Grant found for “Chicken and Chorizo stew.” I liked the story behind it, that a woman with a child was trying to make something out of what remained in her kitchen after a week; as she mentioned, sometimes shopping with a kid is a breeze, and sometimes you have to escape before he has a complete meltdown over whether he can have one of the $6 toy cars that break in less than a week.

So anyway, here is a link to the original recipe, which Grant found at a blog called Rice & Kai. My adaptation is below. I made a few changes to it, in part due to the spirit of adapting to circumstance, and in part because it’s so hard not to fiddle with a recipe. I’m like that with cross stitching designs, too. I have to at least change the color of some flowers in the background or something. 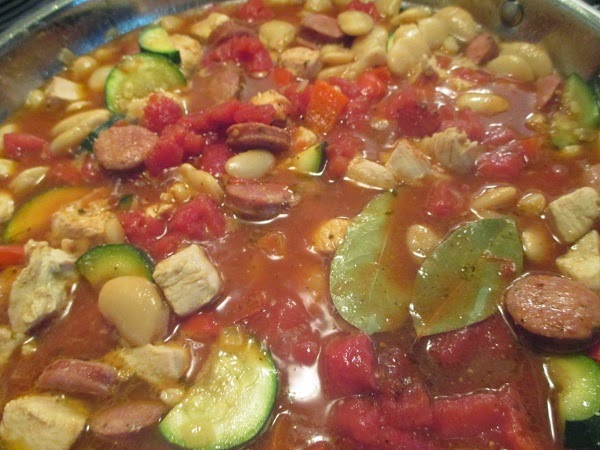 2 tbsp olive oil (if you measure; I just splash in what looks like the right amount
Half a small onion, finely chopped (the original used 2 shallots; sub as desired)
2 chorizo sausages, sliced or diced (I used Aidells’, the other half of a package used in the last recipe)
2 medium chicken breasts, diced, or 3-4 thighs if you prefer dark meat.
At least 2 cloves of garlic or to taste, diced
1 can of butter beans (avoid the flavored kinds)
1 can of chopped tomatoes
1/2 large or 1 small sweet red pepper, diced
1 cup chicken stock
1 tsp smoked paprika (I used Penzeys)
2 bay leaves
2 small or 1 medium zucchini (the original called for spinach, but I had five zucchini in the fridge and decided to repurpose the spinach to salad night)
*Red pepper flakes to taste on each portion after serving, OR include 1 tsp in the dish if you won’t be sharing with a toddler who thinks spicy things make his mouth sad.
Pepper and salt to taste but there is salt in the sausage – taste before adding.
Serve with rice, noodles, or your preferred alternate starch.

If serving with rice start that first. Otherwise, start by softening the onion in the olive oil over medium-high heat; when slightly translucent, add garlic and chorizo. Brown the sausage slices, watching to be sure the garlic doesn’t burn, then add and brown the chicken chunks, about another 3-5 minutes, then add the red pepper chunks, chili flakes and paprika. add the chicken stock; vigorously scrape the bottom of the pan to get all the nice chorizo and chicken bits up, then add the tomatoes, beans, and bay leaves. Simmer uncovered, stirring occasionally, for 15-20 minutes or until desired consistency. While sauce is cooking down, start a pot of noodles if you preferred those to the rice option. If the sauce starts cooking too vigorously, turn down to medium. Stir occasionally and be sure to discard bay leaves before serving. 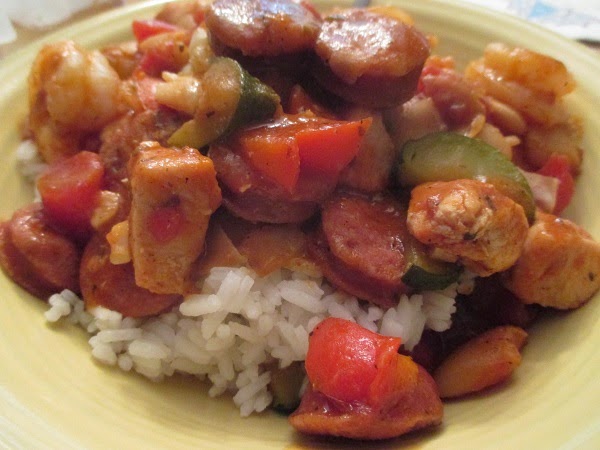 I also cleared a small portion of the pot just before it was finished and simmered some shrimp for my seafood-loving husband, since I had a half dozen left from a previous recipe; they turned out very nicely flavored. Definitely something to consider but the chicken and chorizo work well on their own.

Grant and Ivy liked the recipe better than I did, though they both had to add lots of pepper flakes and more paprika. The toddler was having a bad day and barely ate anything, though he is usually fairly adventurous; if I made this again I would probably just go ahead and make it hot and plan to give him something else for dinner rather than have to present him with an after-the-fact PB&J (which he also didn’t eat much of). I would probably also exchange the butter beans for pinto or black beans.

2 thoughts on “Chicken and Chorizo Stew”