Our old friend Matt has taken a job in Alpharetta, giving us a chance to meet up with him and sample another north Fulton restaurant. He suggested Mama’s Pizza, which has been selling New York-style slices since 1979. Peter Vavaroutsos emigrated from Greece to New York City in the mid-1950s, learned to make pizza the local way, and moved to the Big Peach after twenty years in the Big Apple. His son Jimmy now carries on the family tradition.

One of our readers, Joe Gudelsky, tells me that they were first located in the old Roswell Mall before moving to Old Milton Parkway. In between the two, they apparently spent a couple of years in the late 1990s in nearby Woodstock. In 2012, they relocated to this slightly larger space closer to North Point Mall, in a very nice strip mall a couple of doors away from a Figo Pasta. In the meantime, they’ve received several awards, including the AJC’s “Best of the Big A” reader’s choice award for Atlanta’s best pizza in 2010. 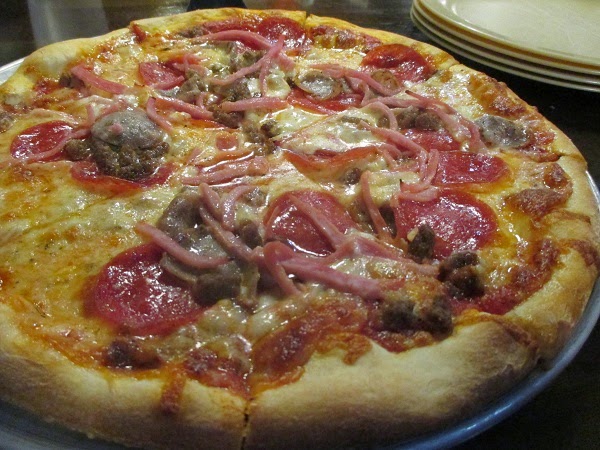 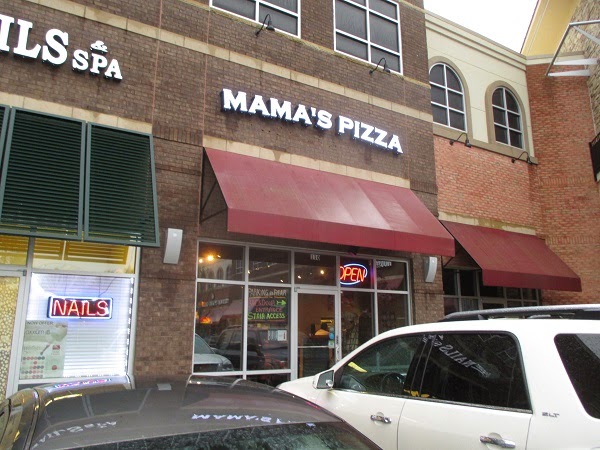 We thought this is perfectly solid neighborhood pizza. “Neighborhood” as opposed to “destination,” if you will. If you’re meeting friends in Alpharetta, as we were, then this will probably go over pretty well with everybody. (Or possibly not. Matt’s wife Kelley, owing to dietary restrictions, had a separate, gigantic Sicilian-style thick slice, buried in black olives, and thought that it was not as warm as pizza should be.)

Matt, Marie, the toddler, and I enjoyed our two small pies: a meats-only and a Hawaiian. Our kid was far from perfect – he seems to be less and less pleasant in restaurants whenever we are with friends, making it impossible to produce witnesses who can attest that the boy can occasionally be a well-mannered angel in public – but he was happy with his slice.

I think they do a good job with the pies here, using good dough, cheese, and sauce, but it really lacked that “oomph” that makes you want to drive across town for one. We didn’t mind the drive, as we were pleased to see our live-too-far-away pals, and we had planned to take the toddler to the play fort at Wills Park afterward, but the rain killed that idea. If you’re in North Fulton, it’s certainly worth a visit, but I think the next time that we try a pie in this area, I’d like to visit Verra-Zanno in Johns Creek.