Lovie’s BBQ has been open for about six months now, in an absolute headache of a space. It’s not their fault; just about every intersection in the city, even all the other ones in Buckhead, is better managed than the nightmare of Piedmont and Lenox. I cringe just thinking about what their Friday evening diners must endure, because it was bad enough at 2 pm when I visited one day in April. If you are coming from Lenox via GA-400, get in the center lane and go straight through the light at Piedmont. Turn left into the parking lot behind Chipotle. That’s the easiest way, and you’ll want to arrive in a good mood to enjoy what they’re doing here.

Because I am – let’s be honest – remarkably thrifty and cheap and lacking in an expense account, I’m always happy to find places that serve a metric buttload of good food for a reasonable price. With the cost of pork going up lately, I don’t know how long Nate Newman and Drew Gregory can keep their prices as low as they are right now, but their combo plate is one of the best deals that I’ve ever seen. Considering that Atlanta-area barbecue restaurants tend to be pricier than anywhere else in the southeast, understandably, and Buckhead real estate the most expensive in the city, doubly so, the $14 they charge for their combo plate is a steal, particularly with food this good. You get heaping scoops of both pulled pork and pulled chicken, along with two St.Louis-style trimmed ribs, two sides, and bread. 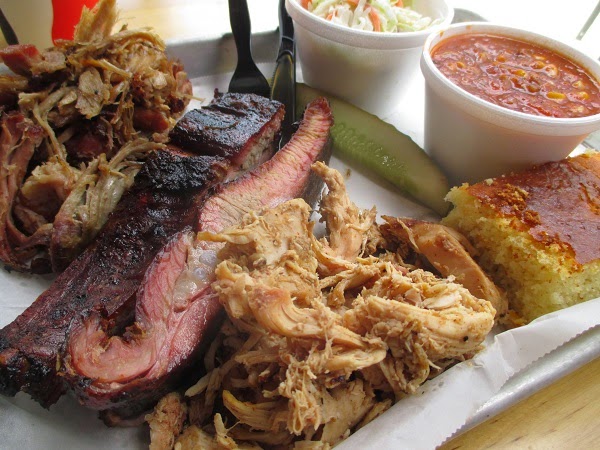 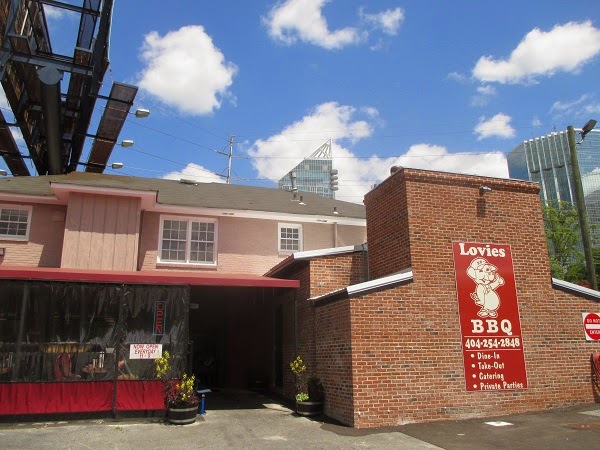 The meats are smoked in a pair of vertical Stump’s Smokers that are located inside the building’s chimney, as you can see in the picture above. I asked about it, and learned that they mainly use pecan wood chips inside their Stump’s.

Doing this blog, I have become more interested in the preparation of barbecue. I believe that one or two places over the years have told me tall tales about what they’re using, and I’ve certainly seen writers make suggestions that some restaurants are just keeping a wood stack for show and using gas ovens. Hearing about Stump’s, I visited their website and found their forums, where there is an entire section devoted to fuels, woods, and charcoals. It seems that many in Stump’s legion of fans prefer using charcoal briquettes, but the smokers are also built for wood chunks. Perhaps the flavor won’t be quite the same as an old, twisting, brick pit, but what they turn out at Lovie’s is nevertheless very tasty. I was pleased that they use whole chickens rather than separating white meat from dark. The fellow told me that some of their guests early on insisted on white meat, and then complained that it was too dry. I don’t know what to think about people that thick.

There is only one sauce available, and while it is not a Lexington-style thin vinegar-tomato mix, it is somewhat similar and as close to one as you’re likely to find in Atlanta. I don’t know that it went all that well with the chicken, but the pork just loved it. The Brunswick stew is meaty and bold, without any cheap extenders, and the slaw was serviceable, if bound to be only sampled in the face of all this food. If Nate and Drew ever conclude that they need to raise prices, simply dropping one side from this mammoth plate would work just as well. Nobody likes wasting good food, and this epic combo plate is simply full of it.