“As I had holiday traffic to cope with, it was half past nine by the time we got home and washed and seated at the dinner table. A moving car is no place to give Wolfe bad news, or good news either for that matter, and there was no point in spoiling his dinner, so I waited until after we had finished with the poached and truffled broilers and broccoli and stuffed potatoes and herbs, and salad and cheese, and Fritz had brought coffee to us in the office, to open the bag. Wolfe was reaching for the remote-control television gadget, to turn it on so as to have the pleasure of turning it off again…” – from “Fourth of July Picnic” by Rex Stout (aka “The Labor Union Murder,” in Look, July 9, 1957), reprinted in And Four to Go (Viking, 1958)

This is Marie, contributing the second of my articles about food in fiction. This time it is a recipe from the completely wonderful source The Nero Wolfe Cookbook by Rex Stout (and, although not on the cover, Barbara Burns who is credited with testing many of the recipes and providing the final wording).

The Nero Wolfe mysteries by Rex Stout have occupied a place in my heart for many years. I first encountered these books as a teenager, more than half my life ago, and they’ve simply gotten better with time and rereading. Most of the stories have done fairly well at standing up to the passing of time, though some attitudes and social norms have changed since their writing (in a couple cases rather considerably). However, I credit these books with getting me involved in a relationship with food that has continued to this day. Those books, along with my grandfather’s complete delight in all good food while maintaining exacting standards for what was considered good, were the foundation for my interest in unusual and specialty foods.

It was actually very difficult to select a recipe from the cookbook. I changed my mind twice about whether to use it at all; Wolfe’s sources for food, condiments and the like are rather better than mine (though I’m always learning!) and Fritz’s supply of materials on hand is considerably wider. He would never have selected, as I did, a commercially produced chicken. He would have already arranged for a local farmer to deliver X number of freshly killed chickens a week, and they’d be heirloom breeds in the appropriate sizes. He would have a vast wine cellar and the education to select the best kind of white wine to put into the broth, whereas I semi-randomly pulled one from the grocery store shelf. 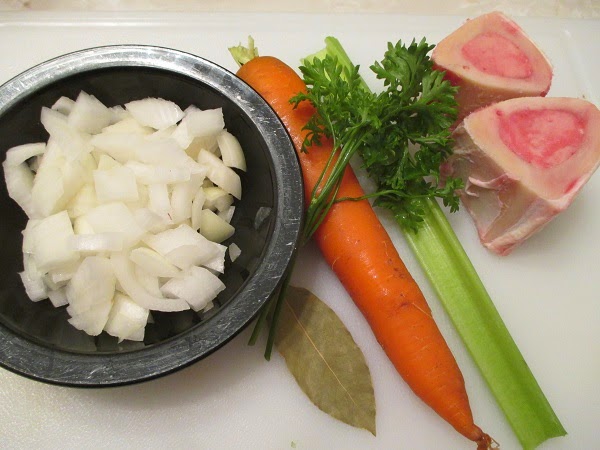 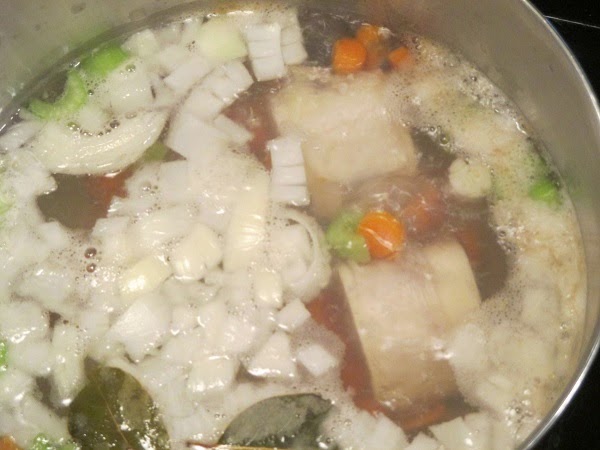 In fact, I completely validated the foreword, “written” by Fritz, in his statement, “But I have not a great hope that many people will eat superior meals because they buy this book and use it.” There are often very good reasons why superior kitchens produce meals better than home cooks can make.

However, as the foreword written in Wolfe’s voice motivated me, as his states “None [of the recipes] is beyond your abilities if you have the necessary respect for the art of fine cooking – and you are willing to spend the time and care which an excellent dish deserves and must have.” 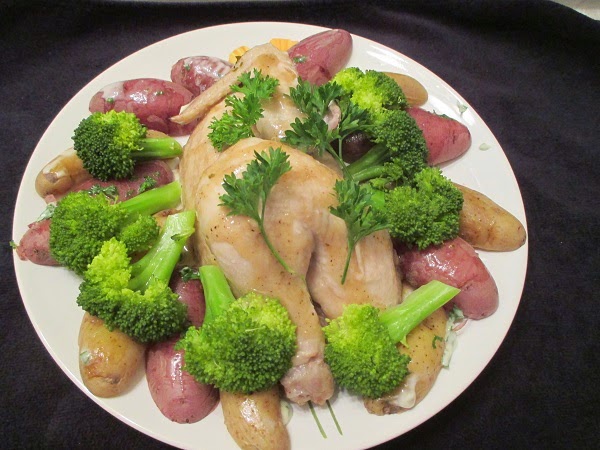 The recipe as provided in the book (recipe adapted from The Nero Wolfe Cookbook by Rex Stout and the editors of Viking Press, Viking, 1973) is as follows:

2 quarts water
2 cups dry white wine
1 1/2 lbs veal bones (I could not find any and resorted to beef bones)
1 carrot, chopped
1 stalk celery, chopped
1 medium onion, chopped
2 sprigs parsley
1 bay leaf
2 tsp salt
2 broilers, 1 1/2 to 2 lbs each (only available now in that size as specialty or as cornish hens – I used one larger broiler)
2 truffles (Our budget does not allow this much truffle – I cheated with this ingredient and decline to discuss how; the flavor was uneven, so I cannot recommend my tactic)
2 tbsp butter
2 tbsp all-purpose flour
salt and pepper to taste 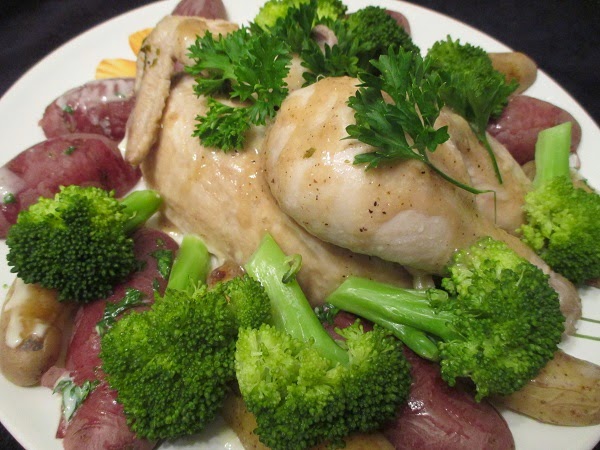 The recipe starts with preparing the broth. I am afraid the celery never saw another use and was a rather expensive piece of greenery as a result. The broth came out very nicely despite using the beef bones. I was actually pleased not to have found any veal bones, as I prefer to avoid veal due to issues with modern factory farming methods. The next step, while the broth was simmering for the requisite hour and a half, was to prepare the chicken. My cooking twine had suffered an unfortunate accident and needs to be replaced; I do recommend that anyone who plans to work with poultry acquire some, and (as I will do in the future) keep it in a sealed bag between uses. I used some upholstery thread instead, which is why the photo of the chicken looks a little odd. The recipe calls for loosening the skin from the breast (very carefully to avoid tearing the skin) and inserting sliced truffle evenly throughout the space, then tying the chicken back up and placing it into the hot broth. The chicken is to be poached for 40-45 minutes (I did a little longer since my bird was larger). Take the chicken out and drain it, then let it rest for at least 5 minutes. Split in half and arrange on a platter, with alternating herbed potatoes and broccoli. Reduce about 3 cups of broth over high heat, add butter and flour and stir to make gravy. Strain and serve gravy on the side.