Maybe every college town has a unique little sandwich shop, but few are as beloved as Momma Goldberg’s Deli in Auburn. It’s just a couple of years older than Price’s Barbecue House, which is on the east side of campus. Momma Goldberg’s is on Magnolia, on the northern border of the university. You can see the upper decks of Jordan-Hare Stadium from the parking lot. We overheard a manager showing a new hire the ropes when we visited, and he noted that it is a requirement to work every home game, and to try and get a ride from somebody else on game day, because this place can be a madhouse and parking is at a premium.

Marie is a big proponent of sampling a place’s signature meal, and here, that’s the Momma’s Love, with roast beef, ham, and turkey with muenster cheese on a seeded hoagie bun. I’d had my lunch down the road at Price’s, so Marie ate here and was extremely pleased with the sandwich. It photographed terribly, of course, but it certainly tasted good. 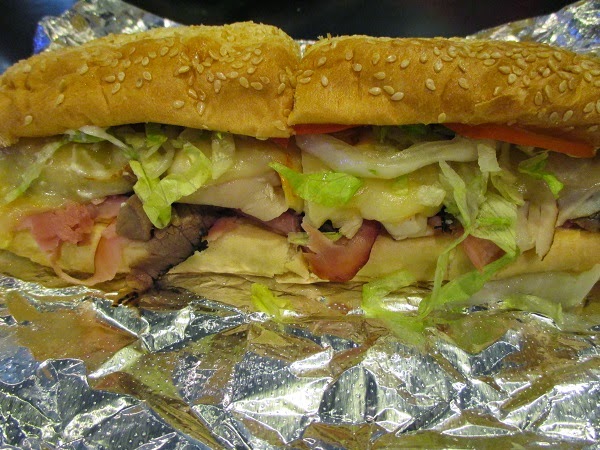 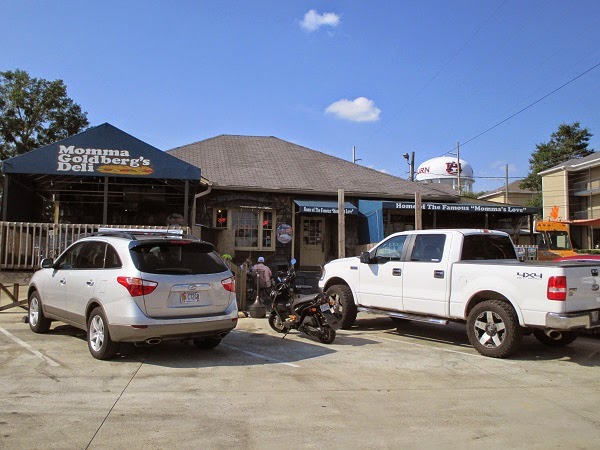 For thirty years, Momma Goldberg’s was a small family-run business, and they had a few other stores run by family members. I checked in with our friend Matt, and he tells me that there had been one on the former Cody Road in Columbus in the 1980s. Don DeMent and his wife Betty, who opened the store in ’76, finally agreed to start a larger franchising operation in 2007. The last seven years have seen some slow and careful expansion throughout the southeast, starting with an additional location in Auburn and a store in Homewood, just south of the Birmingham city limits. At this time, there are more than two dozen stores in Alabama, with another ten across Georgia, Florida, and South Carolina. So there’s this and Chicken Salad Chick: Auburn is the home base for two quite good growing restaurant chains.

The food is very similar in quality to, say, Firehouse Subs, but most of the Momma Goldberg’s Delis are just as well known for beer specials and craft brews, and patios for smoking. They’re family-friendly to a point, but the ramshackle, undergraduate feel of their original location is part of its considerable charm, and I don’t know that it translates all that well to inline locations in strip malls. (This may be why one of Momma Goldberg’s few fumbles in the last seven years has been the closure of their Athens store after only about twelve months. For readers of my vintage, the original Auburn store is reminiscent of the 1980s-1990s Athens classics Sons of Italy and Steverino’s. Opening in downtown Athens a couple of doors down from the Georgia Theatre just screamed of missing the point.) 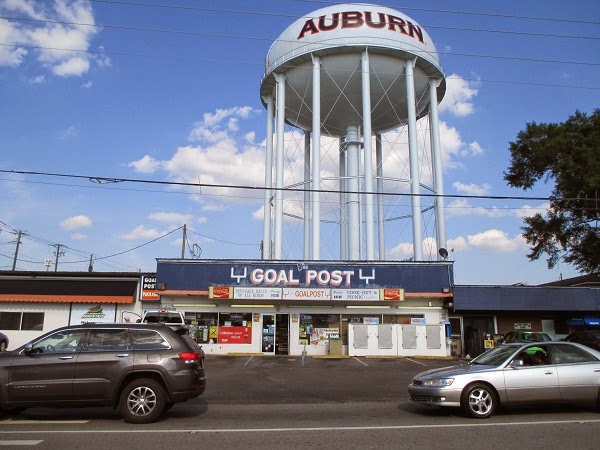 Anyway, the original store is located about halfway between Jordan-Hare and a fantastic water tower, decorated with the university’s logo. After we had tromped around campus and Toomer’s Corner and Magnolia and worn our son completely out with a very, very long walk in the ninety-some degree heat, we went back to our car and made our way to Hastings – a big book/DVD/toy store that reminded me of the dearly-missed Media Play – and found this terrific old package store in the shadow of that water tower. I couldn’t resist trying to take a great photo of it. I bet all of this store’s employees are obliged to work on game day as well.

A final note before moving on to our last meal of the day: our son fell asleep in the car about five seconds after taking that picture above, and we hoped that Marie could sit in a comfy chair in the air conditioning at Hastings while he napped on her lap. Turns out the corporate overlords decided that too many Hastings guests were parking in chairs and not buying anything, and removed the chairs. So a thousand thanks to the awesome employees at the Auburn Hastings for immediately fetching her a chair from their break room so that she could sit down with Daniel conked out in her lap. Let’s hope their corporate masters see that they should replace those chairs for exhausted guests, and not punish their rule-breaking minions in Auburn by snatching their break room chairs as well.