Several months back, in advance of our trip to Florence AL to participate in their Restaurant Week, I reached out to several other convention and visitors’ bureaus around the southeast to let them know what their peers in northwest Alabama were up to. I wasn’t obliged to; I just liked what they planned in Florence a whole lot and figured that other organizations might enjoy watching how it developed and might follow their lead. Among the agencies that I contacted was the Auburn & Opelika Tourism Bureau, and they were kind enough to invite us to their city to treat us to an astonishingly good new restaurant called Acre.

Acre is described as a “delightful anachronism — a restaurant with sophisticated charm and repurposed architectural details serving stylishly modern food with roots deep in Southern soil.” The restaurant is on an acre of land, a good chunk of which is devoted to their garden, where most of the restaurant’s vegetables are grown. This proved an irresistible temptation for some ne’er-do-wells in some nearby apartments, but more on that in a moment.

We try to measure our hyperbole here somewhat, because heaven knows I can go overboard. With that in mind, in Atlanta, we’ve no shortage of farm-to-table restaurants that source as much of their food from as close to home as can be done. Very good meals – excellent meals – can be found at quite a few places that embrace the sustainability ethos around Atlanta. Acre might just be better than every one of them. Marie and I honestly believe that this was one of the best meals that we have had, anywhere. 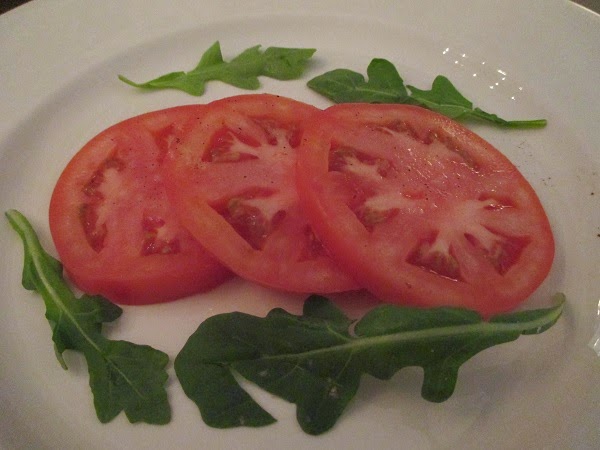 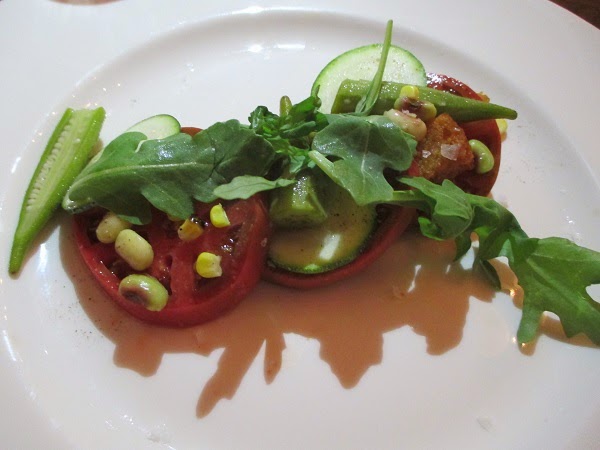 The menu changes constantly to reflect what is available, so what we had might not be there when you good readers make your trip. I started with a simple order of tomatoes given a very, very light drizzle of sherry vinegar. Marie ordered the heirloom tomato salad, which came with corn, pickled okra, garden peas, cucumber, and biscuit croutons with a lemon vinaigrette. With all due respect to the very good barbecue and sandwiches that we’d enjoyed earlier in the afternoon, we could have left town right there and called this the day’s best meal, but there was more to come. 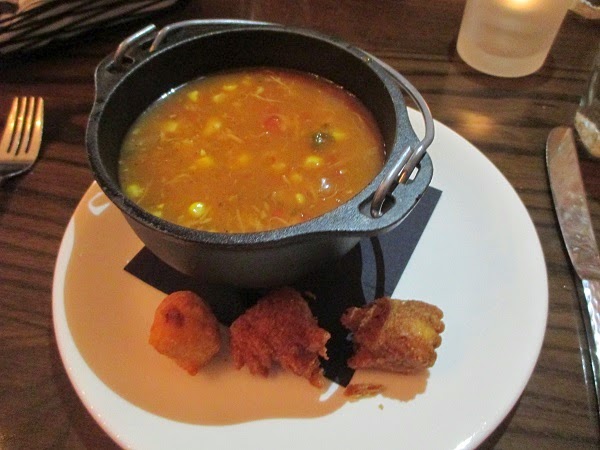 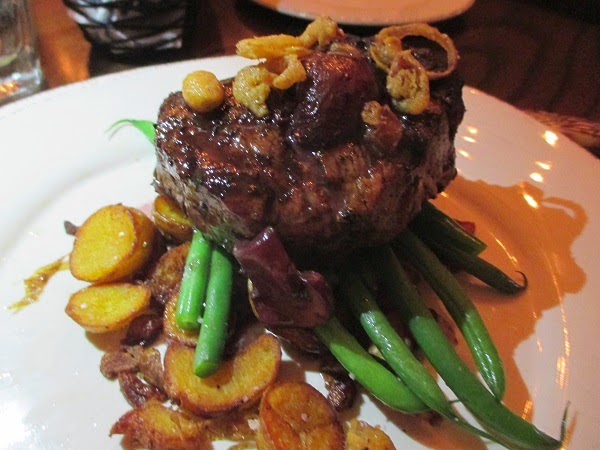 We ordered a burger for the three year-old – who was less than perfect, but pretty darn amazing for somebody who’d had his routine rocked and a mile-plus of hiking around an unfamiliar town in some mean southern heat only to be told to sit down for a nearly two-hour meal. The burger – a smaller, kid’s-sized edition of the brisket burger that they offer daily for grown-ups – was a better burger than all but a few that we’ve tried. To see him leave almost half of it behind, uninterested in eating, was criminal.

One section of the menu is “butcher’s block,” charcuterie from locally and humanely raised animals. We considered ordering the butcher’s board, which many restaurants in this category will offer, but decided to try the Brunswick stew made with rabbit from the Harman Family Farm in Opelika. I can’t tell you how good this was. The meat was terrific, but the base, made from those same delicious tomatoes from a local garden, made all the difference. We love debating and arguing where the best Brunswick stew in Georgia can be found, but in Alabama, there’s absolutely no competition.

For the main course, I ordered the gulf seafood ceviche, made with shrimp, snapper, and grouper. It was indeed completely delicious, but menu envy really set in as Marie offered me a bite of her beef tenderloin steak. It was served with fingerling potatoes, green beans, mushrooms in a cabernet sauce, and shallots, and words fail me. We might have had a better steak once in our lives. It was the most tender and perfectly seasoned steak in the world. 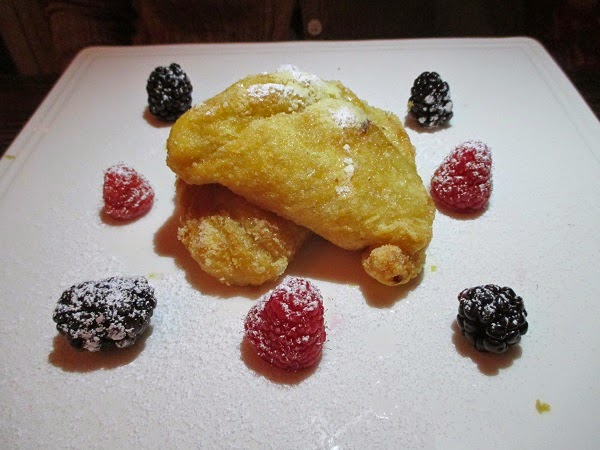 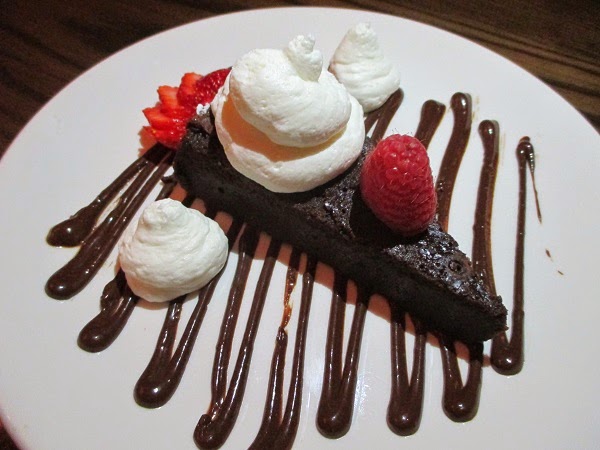 Oh, and then there were desserts. Indulge me here, while I go off on a tangent. As we were waiting for our server to bring by a dessert menu, Marie and I reflected on those terrific vegetable starters, and how we could have left satisfied after that. I told Marie that back in 2001, Roxy Music – my favorite band – reunited for a 51-show tour and I saw them in Atlanta’s Chastain Park. After Phil Manzanera’s blistering solo to end “Ladytron,” one member of our group got up and said that he could leave now. He’d seen countless bands in concert and every guitarist you ever heard of, but what Manzanera did at the end of that song was the most amazing thing he’d ever seen or heard. He’d driven five hours and got his money’s worth from Roxy Music after three songs. Then we got the dessert menu and the very first thing on it was a chocolate dish called Bete Noire, which was also the name of Roxy frontman Bryan Ferry’s 1987 solo LP. I had just finished telling her the anecdote, so I felt obliged to order the Bete Noire. Glad I did.

Marie ordered fried pies, which came surrounded by berries. They were also delicious, and our son, who’d long ago lost interest and had retired to watching kids’ shows on Marie’s phone, shot up like a rocket and gobbled the berries, and as much of the whipped cream from my Bete Noire as I would share with him. 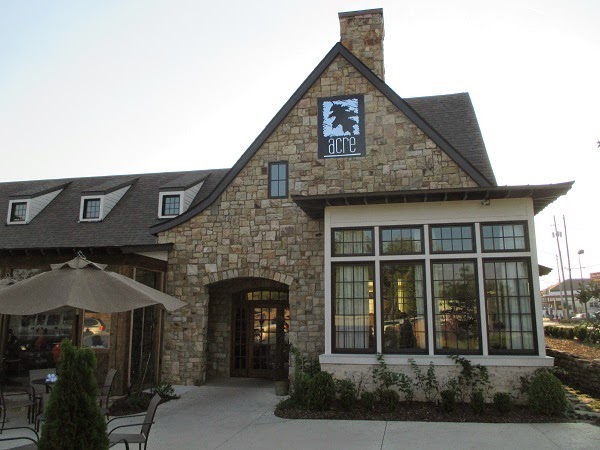 Chef and owner David Bancroft stopped by as we were finishing to see how everything was, and to share a quite remarkable anecdote. On the previous day, the staff arrived to see that somebody had been pilfering their garden. Several watermelons had been stolen and then – you’ll love this – the rinds thrown back over the fence, picked clean, just to give them something else to clean up. We probably shouldn’t comment much on pending litigation, but despite my guess that this was the work of dumb undergraduates, it was allegedly the work of people old enough to know better, who, loudly and boisterously, then took their “we’re gonna get caught!” argument outside for neighbors to phone the police about a domestic disturbance. There are, it’s been said, dumb criminals in every jurisdiction.

Chef Bancroft has said “Our goal is to interpret the complex, traditional tastes of the Deep South in a totally fresh and modern way.” At Acre, they’re nailing it. We really loved the meal here, and encourage all our readers to consider a trip out this way. Acre is only about five minutes off the interstate, less than two hours from either Atlanta or Birmingham. It’s absolutely not to be missed.

(As noted, this was a media event sponsored by Auburn & Opelika Tourism Bureau, and our meal was complimentary. It’s our policy to always note when we’ve received our meal without charge. If you would like to invite us to your restaurant’s media events, please drop Grant a line at gmslegion@gmail.com .)