This is Marie, contributing an article about one of my go-to recipes, chili. Yes, I know, everyone has their own chili recipe, and that is kind of the point. This is one of those foods that you don’t actually follow any kind of instructions for, beyond making sure it has some kind of sauce, some kind of beans, and some kind of powdered pepper.

The thing is, my mother is not from the U.S. originally, and she learned all her American recipes from her mother-in-law, so she made chili from a recipe. When I first got out on my own, I made it from that same recipe. Then I noticed that I could cook the chili for half an hour less time if I sauteed the onions in the grease from cooking the hamburger, and that made the light bulb turn on. I could make changes, and the changes could make the whole process better. I could change everything.

The original recipe had light and dark kidney beans. I went out and bought four different kinds of beans that weren’t kidney beans, and approved of the results. I tried different kinds of meat and discovered that beef and pork mixed is best (though it’s too much trouble most days unless I get hold of one of those nice “meatloaf” packages where both kinds are shrink-wrapped together). This was the first recipe that I was confident enough to experiment with, and the final version I settled on is completely different from the original. 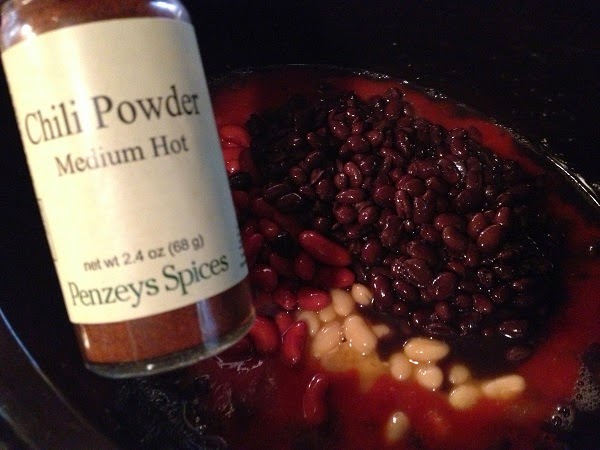 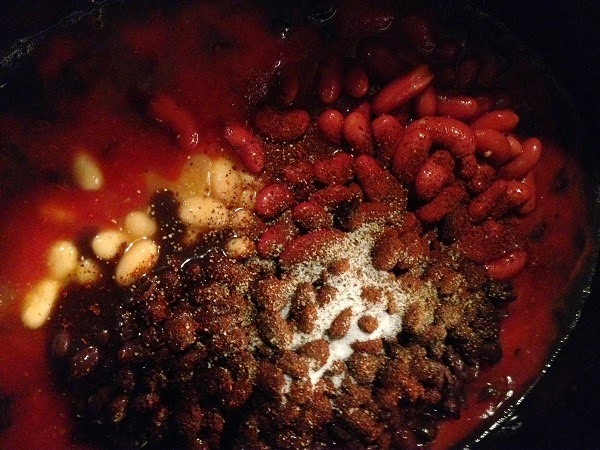 I substituted and fiddled and messed around and had a few flops that I was too poor not to eat, and came up with the following:

2 cans of tomato sauce, or 1 can sauce and 1 can diced tomatoes
1 small size can of mexican-style corn; or a 1/2 package frozen mexican corn; or if all else fails, one or two packs of the single-serve frozen corn packages
2 tbsp chili powder (or to taste)
2 tsp adobo spice (or to taste)
1 tbsp pepper (or to taste)
4 cans of mixed beans, drained (usually I have pinto, black, navy, and kidney)
–>start the crockpot with the above
1 to 1.5 lbs hamburger or 1/2 each ground beef and pork, cooked and drained (leave drippings in pan)
1/2 sweet onion or 1 small regular onion, chopped
1/2 sweet pepper, diced
—>fry up the meat, crumble it, then tilt the pan and scoop out the meat leaving the drippings in the pan. Put the meat in with the beans, then fry the onions and peppers in the drippings until the onions are translucent and just beginning to brown on the edges; generally they will have absorbed the drippings unless you took really high fat meat. If you are concerned about the that fat, replace the drippings with olive oil, but it really tastes better with the unhealthy stuff.
You might add some salt but we generally don’t, as there is plenty already in the canned beans. 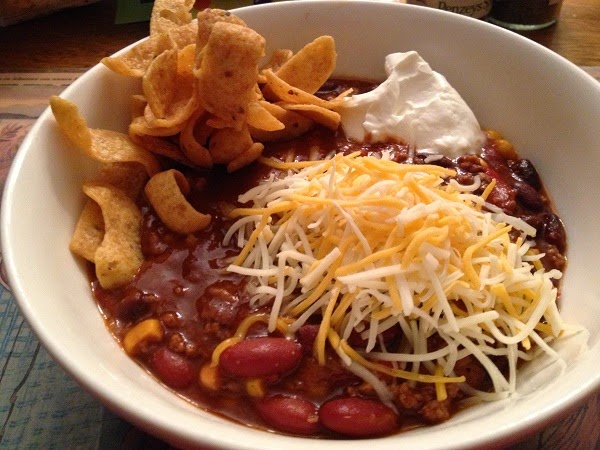 Serve with, depending on your tastes, shredded cheese, sour cream, Fritos (my husband’s idea, and another good reason to leave the salt out of the chili) and anything else that strikes your fancy.

What was your first recipe that you changed? Tell us about it!