The day after Christmas, we left town for a trip to the Georgia coast, and stopped in Savannah for some pizza. There are two quite well-known places in town to get really good pizza. Vinnie Van Go-Go’s is very popular and has been written about many times, so I decided we’d go for the (slight) underdog. Screamin’ Mimi’s is a New Jersey-styled joint that was opened by Lou and Scarlett Cobello, late of Atlantic City, in 2007. They specialize in gigantic slices. One slice per guest is probably all that you need. A second is just asking for a food coma.

We somehow made it to Savannah right on schedule, despite a big delay getting out of Atlanta. There was a bad accident on I-75 in Henry County, and we navigated around most of the backup using a combination of surface streets and I-675. We later took a Baby Mercy Break in Dublin, where gas was an agreeably cheap $2.12 – fifteen cents cheaper than what we paid that morning in Marietta – and the sun went down behind us on the other side of Metter. Happily, traffic was so light on I-16 that we made up for lost time and pulled into the strip mall that’s home to the restaurant shortly before 7. Screamin’ Mimi’s is incredibly easy to find, and is one of those rare restaurants in central Savannah to have a free parking lot available. It’s also incredibly popular; we snagged a table just as another group was leaving, and the tiny joint didn’t clear at all during the time we were there. 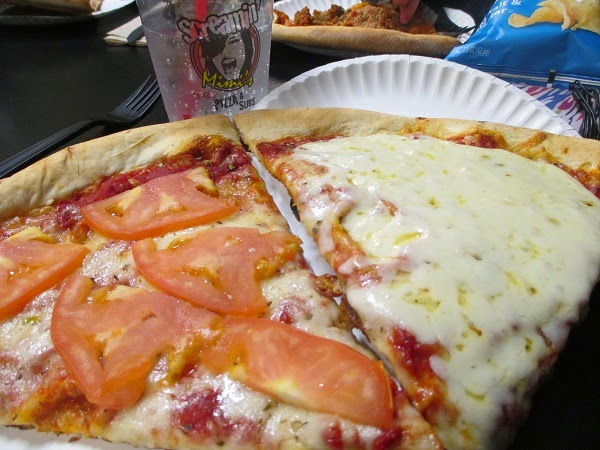 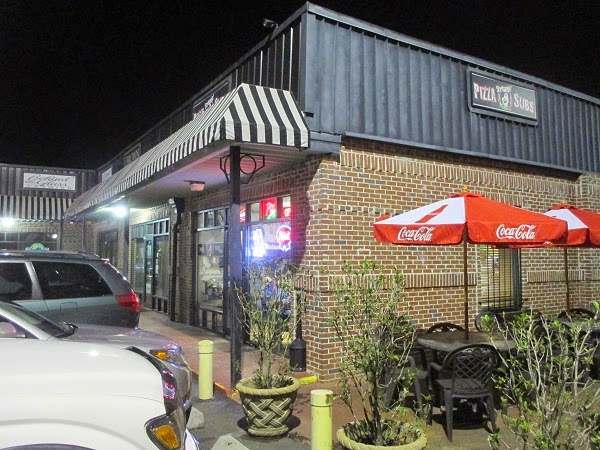 Marie ordered a slice with ham, and it came with enough ham to fill three sandwiches. I couldn’t finish my two slices, and wondered what I was thinking, ordering one of ’em with extra cheese. The girlchild had a bowl of pasta that did not entirely please her – the only sour note rang at our table – and the three year-old scooped up about half of Marie’s diced ham to eat with his potato chips. He had lots of fruit and vegetables all weekend, so we didn’t feel bad about this monstrously unhealthy supper.

We’ve only been through New Jersey once and can’t personally vouch for the authenticity of the pizza, but fortunately, we got to talking with the table next to us after apologizing nine or ten times for bumping chairs with them. This very sweet couple retired here from New Jersey ten years ago and were delighted to see the Cobellos open this place, and come for pizza at least twice a month. “We wouldn’t come here if they were doing it wrong,” they said. The slices are huge and greasy, with a crust that’s thin enough to fold but not brittle enough to snap. In fact, they say, the only thing about Screamin’ Mimi’s that’s not quite right is the name. Mimi is Scarlett Cobello’s nickname, but she’s apparently always polite and “a real sweetheart,” not given to yelling at all!