For many years, Marie and I have enjoyed embarrassing our daughter with song and dance. We arrived at Sugar’s Ribs about ten minutes before they opened a couple of Saturdays back and might have just surpassed ourselves.

Sugar’s has a jukebox inside. It’s one of those retro-designed types that looks like an old Wurlitzer with the bubbles and everything but plays CDs, and it’s mainly the sort of music that you wouldn’t be surprised to hear in a rib joint in Tennessee. We heard Waylon Jennings and The Allman Brothers Band and Elvis while we were there. But at the same time, there’s a different set of music – 1980s pop hits from the likes of Thompson Twins and Bananarama – quietly playing in the background, and which you can hear outside. While we were waiting for the doors to open and the three year-old to get his wiggles out, Marie started dancing to Bananarama’s cover of “Venus,” which was a huge hit when I was the girlchild’s age.

So Marie is dancing and looking amazing, and the girlchild, with smoke coming out her ears, insists that she stop, because there are people in the parking lot of that $27.99 motel across the street who might see her. I reminded the girlchild that I happen to own an astonishing number of Bananarama singles and 12-inches. She asked “And…?”

“Well, did you ever wonder why your old man, whose musical taste generally runs in the direction of college radio, or David Sylvian, or the Beatles and the Byrds, or ’70s Miles Davis, has all those Bananarama records? You need to see the video for ‘Venus,’ daughter mine. All three girls look awesome and sexy in that video, but the sight of Sarah Dallin dancing in those tight blue jeans — well, I was your age, then, and she was and is completely unforgettable. So when I see my gorgeous and beautiful wife dancing like that to the same song –”

“NO NO NO STOP TALKING NO!” she shouted before vanishing. We didn’t see her again until the restaurant unlocked the doors and her face was still crimson. 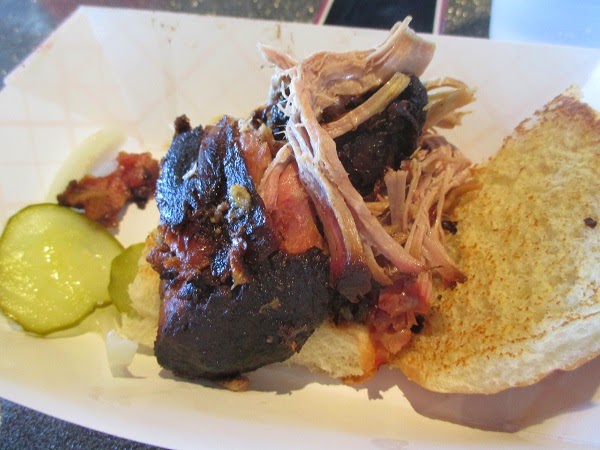 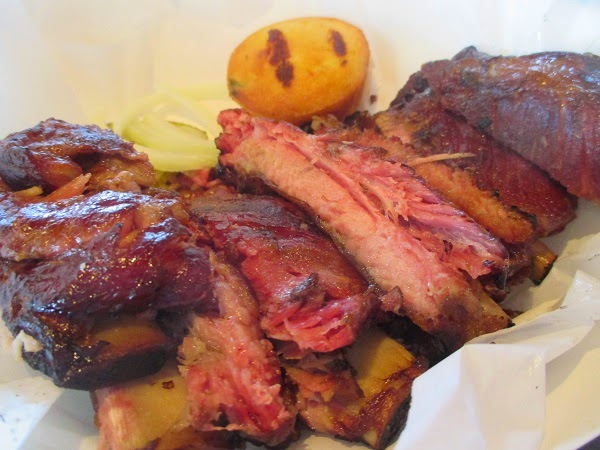 Prior to starting the blog and looking for new places, Sugar’s had been one of our semi-regular stops in Chattanooga whenever we passed this way en route to Nashville. We probably visited five times, the last of which was the occasion that we wrote about in May of 2010. Since then, our search for different places kept us away, but I think that we were overdue for another stop. The girlchild certainly agreed. She loves the pulled pork here; it’s one of her favorite barbecue restaurants, and even though she has not been here since she was eleven, and not so easily embarrassed, she was pleased to dig in and inhaled her sandwich.

I had originally thought about saving a little money and splitting a ribs and pork combo plate with the girlchild, but unfortunately I had forgotten everything is a la carte at this place. So the four of us split six ribs, pulled pork and brisket sandwiches, a corn cob, and a bowl of vinegar slaw, along with some cornbread muffins, pickles and onions. Everything was very good, and, with a dessert (noted below), came to about thirty dollars. There are a couple of barbecue places in the Chattanooga area that I enjoy more than Sugar’s, but Sugar’s owners are not resting on their laurels and letting their high volume business, driven by lots of billboard traffic, ensure that the locals think that they must be “number one” because they’re always seeing ads for them. This is very good barbecue, smoked right, tender and juicy. 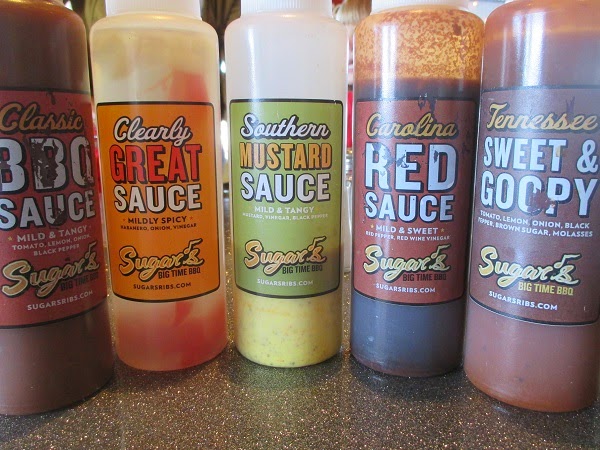 Not pictured in the photo above: the Hot Lips, an orange-brown concoction which is among the hottest barbecue sauces we’ve run across. It was best mixed half-and-half with the Classic sauce. 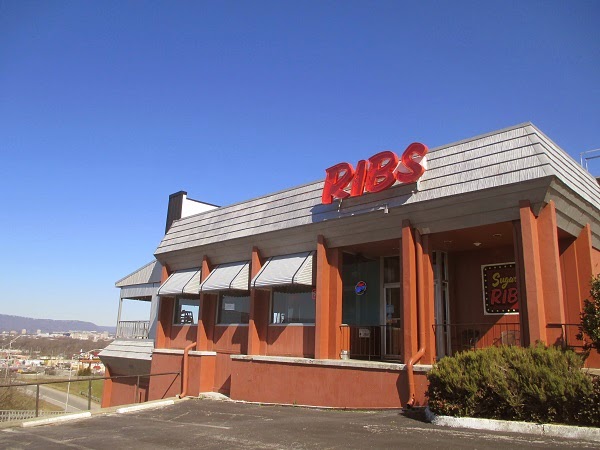 Any trip to Sugar’s isn’t complete without a visit to see the goats. The restaurant is on a hill overlooking the city, and the goats – along with a mean rooster – are fenced on the other side of the building, chomping away at the weeds, the kudzu, and the corncobs that three year-olds feed them. This was one happy kid; he got to eat corn and give his leftovers to a goat. I’m sure thousands of happy three year-olds have done this before him.

The only sour note came with the dessert, but it was a valuable lesson for the girlchild. They had these pre-packaged slices of chocolate pie from some national outfit, and the girlchild, who doesn’t often get to go to fast food restaurants, recognized them from some place that her grandmother took her when she was a tot. So she begged for one of those and I said that’d be okay. She ate about two-thirds of it before giving up with a sour face. “I should know better than to get a dessert in a box. That just tasted like chemicals.”

She may not like the way that us old folk dance, but every once in a while, she kind of lets us know that we’re raising her right.

Other blog posts about Sugar’s Ribs: