We try to avoid letting personal sadness get into the blog much, but, as some of our friends know, we had some pretty terrible turmoil in our lives some months after my dad passed away in 2011, and, the following year, it got a lot worse before it got resolved. The bottom line is that, for many years, my daughter has seen very, very little of her mother, who lives in Kentucky, and we have, for many of the same reasons, seen very, very little of my older son, who lives there with her.

So we met up with my older son, who turned eighteen (!) a couple of weeks ago, at Bob Sykes Bar-B-Q in Bessemer. If it had been a bad or an unhappy meeting, I wouldn’t be sharing a story about the restaurant, because unhappy emotions overwhelm even the best food. I love my son and miss him very much, and am glad that he’s doing well. It was nice to see him for a little bit, and for our younger son, who did not remember him, to “re-meet” him. On the subject of my daughter and her visit to The University of Alabama campus that left her in low spirits, he advised her to not do what he did, and put off, disregard, and hem and haw about what to do about college. He’s going to start at Louisville in the fall and aims to get a degree in business, but he’s not especially enthusiastic about it, unfortunately. 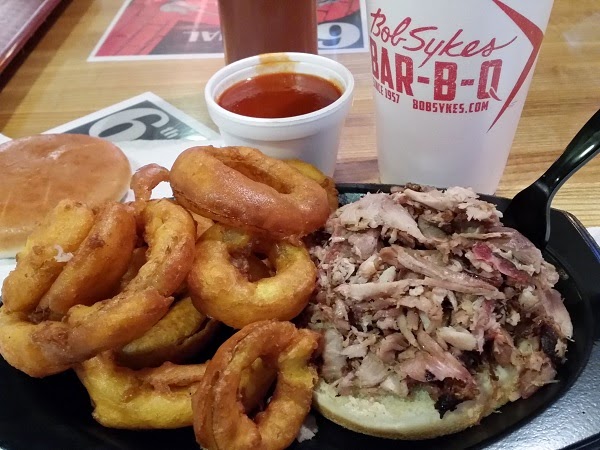 Well, my boy’s awesome, and so is Bob Sykes’ restaurant. It has been at the present location since 1977, although its history stretches back many years before then. Bob and his wife Maxine opened their first restaurant, The Ice Spot, in Birmingham in 1957. Over the next decade, the couple, with their young son Van, operated a few other restaurants, including one of the old Frost Top Root Beer Drive-Ins, before electing to specialize in barbecue. In 1967, they moved to Bessmer and opened this business, and soon after that began franchising additional locations – perhaps fourteen in total – around Alabama. None of these lasted for many years. In 1977, they moved a few buildings over, to their current home, and kept the focus here as the franchises closed.

Interestingly, guests who want to visit Bob Sykes Bar-B-Q and are using I-20/I-59 will drive right by the original 1967-77 location. That building is presently home to Muffaletta’s Pizza and Pasta. I learned this, and lots and lots and lots of other details, from the tremendously good Southern Foodways Alliance interview with Maxine and Van, conducted in 2006. All of those oral histories are completely terrific, but Maxine, who passed away in January of this year, and her son Van seemed especially enthusiastic and full of details and background and opinions.

Van Sykes, who took his father’s place in the business after a stint in the Air Force and after his father’s stroke sidelined him, amusingly suggests that there’s what I’d term a demarcation line between Georgia and Alabama – one state can do Brunswick stew and the other can do barbecue. I certainly don’t agree with that, and yet it is absolutely true that on those rare occasions when I have found Brunswick stew in Alabama, it’s never been particularly good. 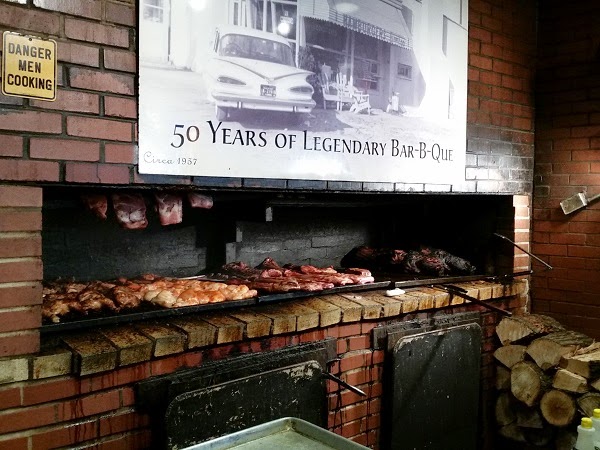 But that’s okay, because while over the years I have run into one or two plates of Alabama barbecue that I did not enjoy all that much, the overall standard for Alabama barbecue is really freaking high. Bob Sykes Bar-B-Q is very good, and certainly worth a visit. They smoke over hickory wood here, with shoulders over the flames for six to seven hours. The meat is a little dry, but very nicely smoky. 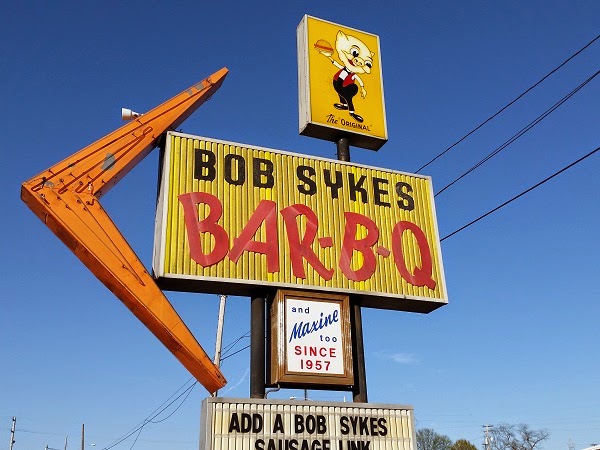 During our visit, the ordering process had been a little modified for the day. Normally, this is very much a do-it-yourself, order-at-the-counter kind of place, but a local church group was raising money waiting tables and filling Pepsi for donations. Often, when we’re at a new restaurant, I like to chat a little with a server about the business, the techniques and preparation, or how long they’d worked there. I’m not much of an interviewer – I’m certainly not a blessed bit as amazing as Southern Foodways’ Amy Evans – but every once in a while, the small talk leads to a gem or two. But since our server was not actually an employee of the restaurant, we just chatted about kids. Lots of talk about kids.

In a few months, reckon I’m going to need one of those “I’m a Louisville parent” stickers. How weird is that?

Other blog posts about Bob Sykes: