I’m going to say something here that might make Orlando natives and lovers bristle, but here goes: the city does not have a good reputation for interesting and unique eats. It’s said to be a roadfood desert. If it has champions, they are quieter than most. Nevertheless, Sweet Tea & Bourbon, the best of the many food blogs in Florida, has devoted some time to the town, but not even Mike sold me on any must-eats. This was going to take some time and research. I settled on five places for Marie and I to visit with our daughter while our son played with his grandmother all day in Apopka. I also picked eight places to shop to really give us a chance to dig into the city that the Mouse calls home and is surrounded by a more extensive grid of toll roads than I’ve seen anywhere before.

First on the agenda: Beefy King. This was a must. Since I love the survivors of small, failed, fast food chains, I really wanted to stop here. Beefy King launched in 1968 and grew to six locations in the city, and apparently a few others in South Carolina, although they sadly went down in the early seventies. Only one store, on Bumby Avenue, survived. They specialize in roast beef and pastrami sandwiches with a big side of what they call beefy spuds. Unfortunately, this side was the first disappointment of the day. When I heard “beefy spuds,” I thought “steak fries.” Nothing so grand; they are just tater tots. 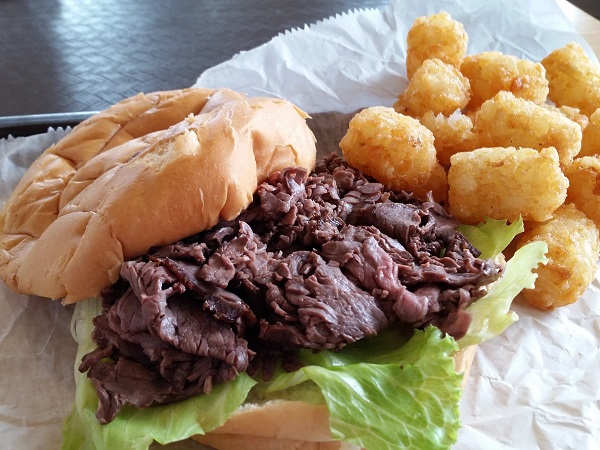 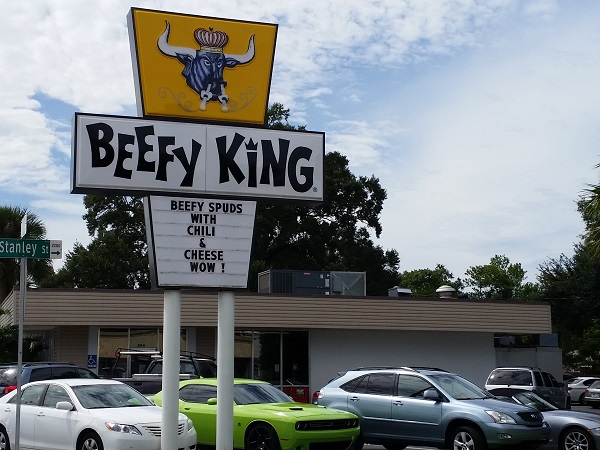 When Beefy King launched, they were clearly planning to compete with Arby’s and Roy Rogers. Well, I can’t speak to the latter, but Beefy King’s roast beef sandwich is dozens of times better than the last Arby’s sandwich that I had, six or seven years ago. Circumstances of an old relationship meant that I ate quite a lot of Arby’s in the 1990s, so I’m aware of how badly the food at that chain has stumbled over time, and it wasn’t very good then.

Beefy King’s roast beef is given a last-minute prep-to-order by way of steam holes in a steel workspace behind the registers, wrapped tight in foil, and delivered without spending a second under a heat lamp. The resulting sandwich is a whole lot better than anything you can get at Arby’s, but I still wasn’t really wild about it, to be honest. It was pretty good. There are bottled sauces available toward the front. I was only faintly disappointed to see that the sauce bottles didn’t feature a picture of their steam-blowing angry bull mascot. The hot barbecue sauce gave it a nice little kick that the meat was missing.

Their system seems archaic, a crowded and frantic mob of teenagers writing down orders and calling them back to others working elbow-to-elbow. The restaurant was packed full of diners at 11.15 in the morning, which left the few pictures that I did snap indoors ugly and unusable. It’s a very fun little throwback in design. I love going into an old place and having it look and feel like an old place. It’s an almost perfectly-preserved fast food joint from 1968, with period wood paneling and strange swivel chairs attached to the tables. It’s a fun place, and I’m very glad that it’s still around, but I don’t believe that I would ever become a regular.

After we ate, we walked next door to a used bookstore called Book Worm. It’s pretty skippable unless you really like recent mass-market fiction or need to see what an entire shelf of Jodi Picoult looks like. A much better option for used books in Orlando is BrightLight, on FL-436 on the north side of town, literally around the corner from the Orlando-Seminole jai-alai fronton. BrightLight doesn’t seem to have purchased any used CDs since they made a bad deal on two dozen copies of the String Cheese Incident’s first album, but they’ve got a really interesting selection of rare and leather-bound books, and a very nice wall of comics. The humor section is heavy on Mad and those great mid-80s RE/Search Publications books. We really enjoyed shopping here and, should we ever come back to Orlando, will definitely return.