In the previous chapter, I mentioned that Tarpon Springs has a very big Greek-American population, and a whole lot of restaurants serving Mediterranean and Greek cuisine. It’s possible that the town has reached saturation point, because how’s a new restaurant supposed to stand out in such a thriving community with established customer loyalty? That’s what George Krouskos had to consider when he was thinking about opening a restaurant, and he settled on a hot dog stand that also smokes up some pretty good barbecue in an outdoor steel upright.

I think that I surprised Marie and the girlchild by not actually planning to have barbecue here. No, I came here for hot dogs, and then I got peer-pressured by them and our friends Debbie and John into ordering the best of both worlds. Their signature Q Dog has pulled pork and a Midlands Carolina mustard sauce over an all-beef dog. 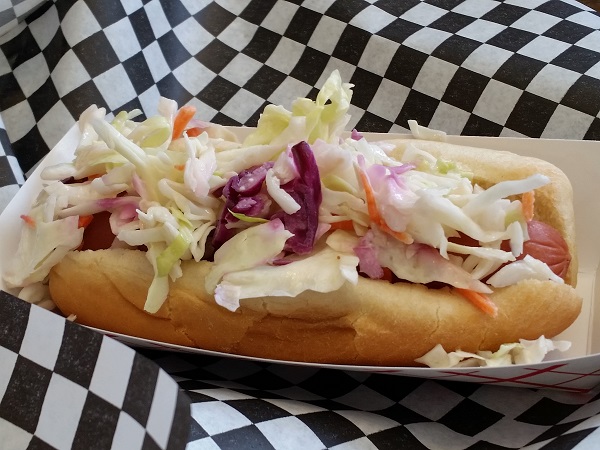 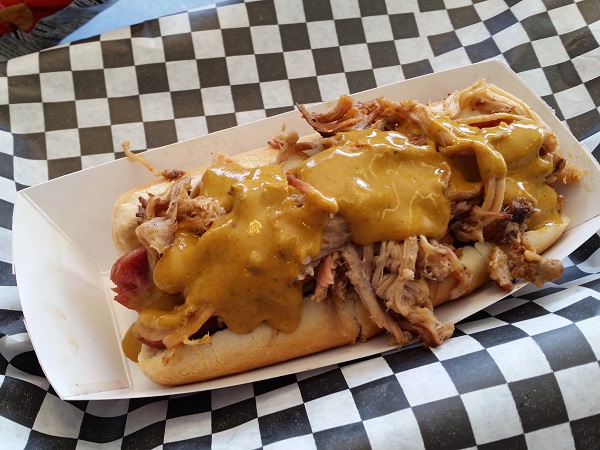 Then Marie went and ordered what I was planning to have, a simple slaw dog. I think that she got the better end of the deal. The problem with the dog I had is that the flavors overpower each other, with the heavy, tasty mustard overwhelming everything. It’s a good sauce, but in moderation. I’d have preferred the slaw dog, and a separate barbecue sandwich. I’d have appreciated them more that way. 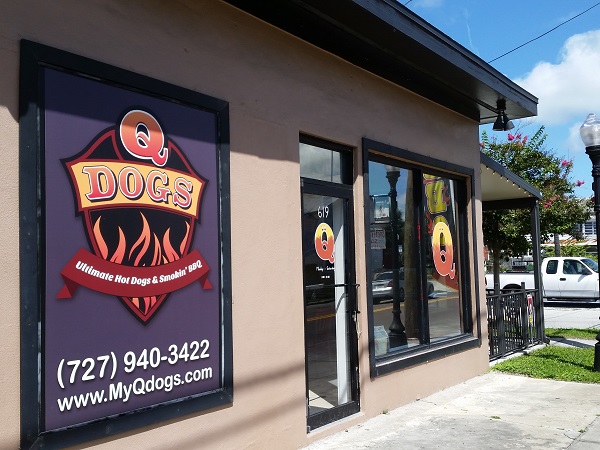 Unsurprisingly, Pinellas County is kind of lacking in barbecue restaurants, and so Q Dogs fills a hole in the community. Debbie shared some of her Brunswick stew and it was really great, full of rich tomatoes and lots of meat. I like to see restaurants not skimp on the stew. They also do St. Louis-cut ribs, turkey legs, brisket, and even slow-smoked mullet at various times throughout the week. Should we make it back to Tarpon Springs, and my family get weary of me having falafels and gyros and kabobs everywhere we go, I could imagine being directed back here to try the pulled pork and some of the other sauces.

This was the only restaurant that we visited on the Friday for a meal. Once we finished up, we stopped by a Starbucks to get the girlchild a pumpkin-iced-frap-spice-venti-thing and say goodbye to our friends, and then we made the long, awful, awful, awful drive to I-4. Honestly, west of US-19 is lovely and wonderful and easy driving, but that road itself, and then the neighborhoods we were directed through to FL-580, and then that wretched thing… man, it’s like they intentionally designed a traffic system here to make everybody want to stay indoors, and then offered incentives to relocate the worst drivers in the nation to Oldsmar and Town ‘n’ Country.

Somehow we got out without me self-combusting. We took I-4 to FL-429, paid about five bucks in tolls to drive 35 miles, and got to my mother’s house around 3. She made spaghetti for supper. She makes pretty much the best meat sauce on the planet for her spaghetti and I hadn’t had any in a year. I was overdue.