I try not to type much when we make one of these sporadic photo posts, but here’s the deal. Normally, we’d have thought about something closer to home rather than making two long trips to western Kentucky in one year, but back in June, I drove past Dinosaur World and figured that our four year-old might enjoy that. Then I had a couple of very promising meals in the region and started putting money in the breadbox for a return trip. This turned out to be a really, really good idea. Sadly, the girlchild missed out on the fun – we said goodbye to her in the parking lot – but her younger brother had more fun than you thought possible on this trip, with several kid-friendly stops punctuating the restaurants. We even got to see a dimetrodon! (Although not, sadly, a fire-breathing one.) 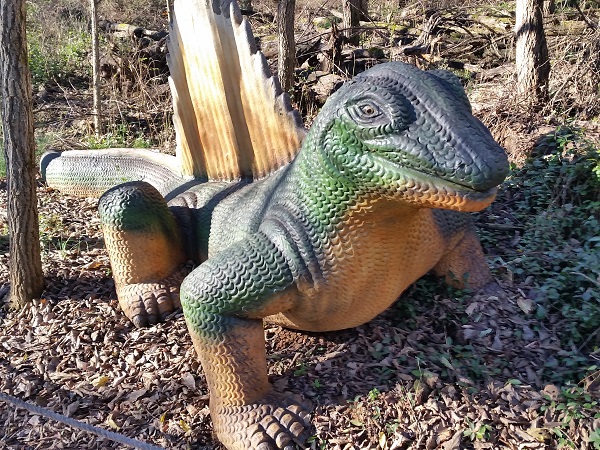 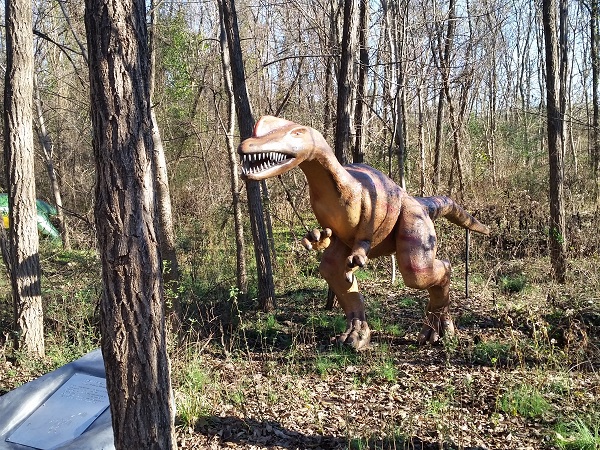 Admittedly, you kind of have to be about four years old to really appreciate Dinosaur World, but believe me, if your children are about four years old, they will really, REALLY appreciate this place. It was all our boy talked about for hours. Four, you’re right at the age where you’re pretty sure these things are not actually alive, but then your parents start pretending that they’re only asleep. It’s that great age where you completely play along but also wonder whether… just maybe… 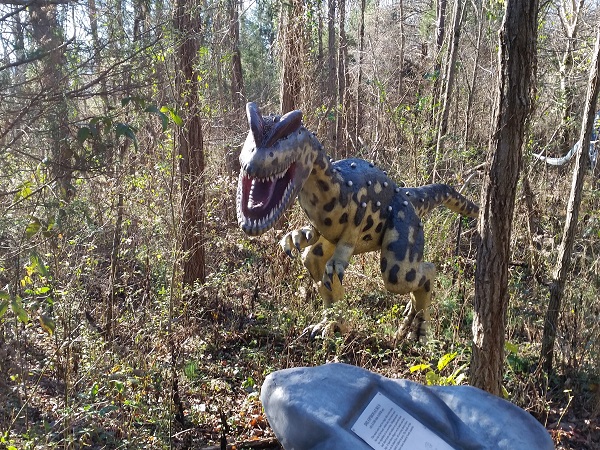 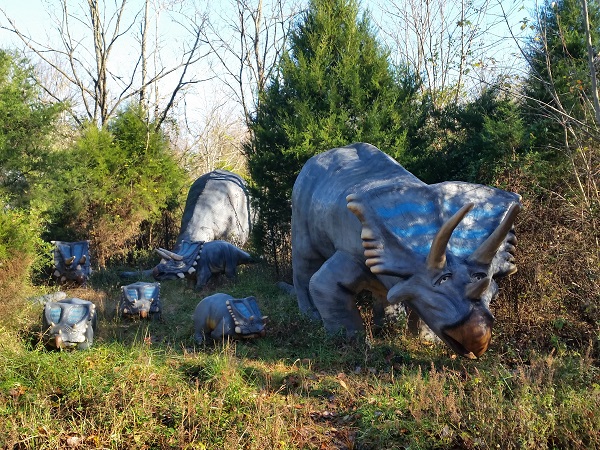 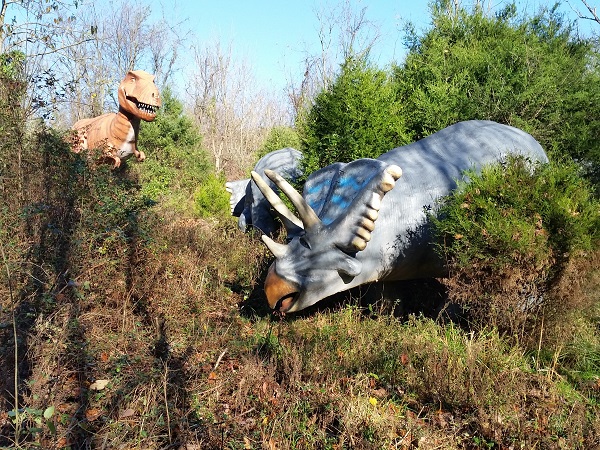 If your kid is much older than four, this will certainly seem cheesy and old-fashioned to them, and so will things like my “very quietly sneaking past the allosaurs” routine. Eventually, our son settled on them being made of metal. Then, about halfway along the paved path, we walked up the hill to the interstate-visible “photosaurus.” You’re not meant to touch the dinosaurs on the path, but you can climb on this gigantic thing’s feet. And it’s clearly not metal. Not! Metal! The excitement returned instantly, with nervous giggling and running in circles. These are real dinosaurs! 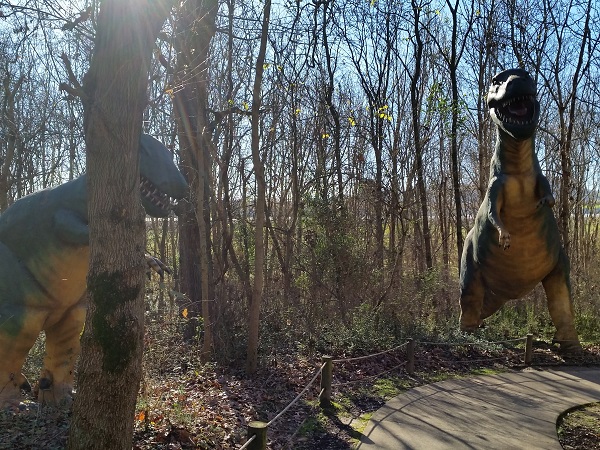 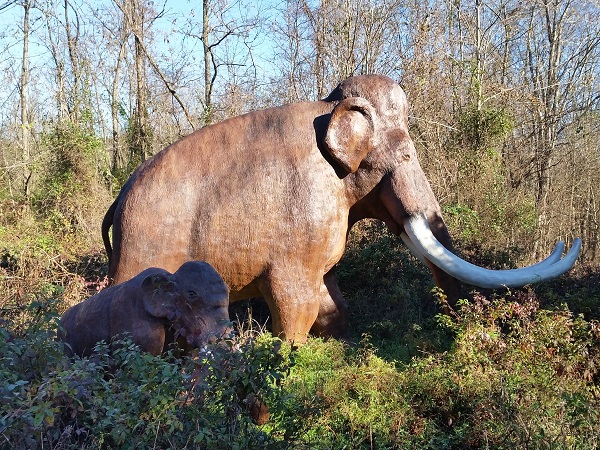 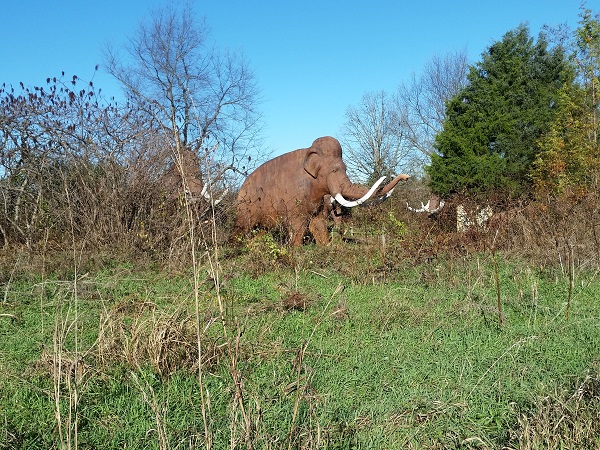 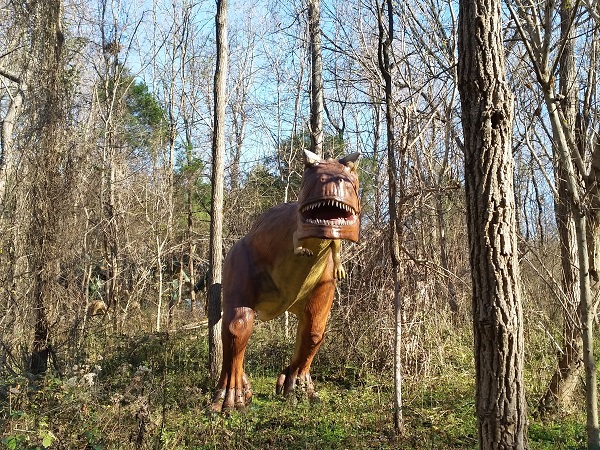 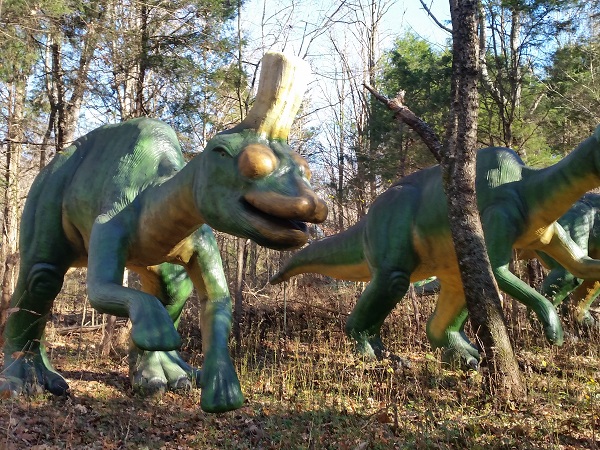 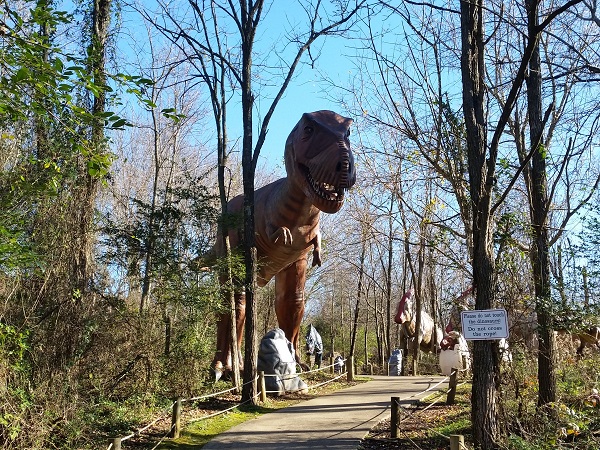 Dinosaur World is not cheap – I think it was $38 for two adults and a kid – but we didn’t object at all since he had so much fun. I also got a few more words on what the heck happened across the street. See, Cave City is just full of little old-fashioned tourist attractions to grab the dollars of anybody coming to Mammoth Cave, which is a national park that surrounds the – get this – four hundred known miles of caves and tunnels underground. Across the street from Dinosaur World, there was once an old western town called Guntown Mountain. Earlier in 2015, the property was either leased or purchased or something by a businessman from Louisville, who renamed it “Funtown” and repainted some of the facilities, and then some legal unpleasantness and shenanigans and tomfoolery started, and, well, let’s not invite a libel lawsuit with engravings and leave it there. Guntown/Funtown closed after seven weeks, leaving behind this amazing haunted house: 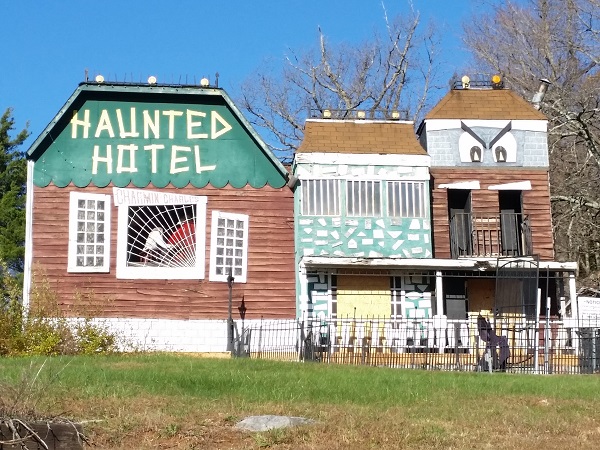 I commiserated with the staff at Dinosaur World about the haunted house not being open any longer, because I love silly, old-fashioned, goofy old attractions like that, and not the intense fright-fest things like you see today. They recommended that we visit Big Mike’s Rock Shop, about three miles down the road, where, for a dollar a head, we could enjoy a completely goofy and absolutely wonderful old “mystery house” with optical illusions and defying-gravity tricks and balls rolling uphill. We had a grand time at Big Mike’s and I felt rotten for not spending a hundred dollars on geodes in the shop, since we had so much fun for so darn little.