We didn’t want to visit Tennessee without having a little barbecue. So after our fun hike at Ijams, we drove back along Kingston Pike, which is the main, sprawling commercial artery of the area, running alongside I-75/I-40, from downtown west for about three miles. Archer’s BBQ is a small chain that has grown very quickly in the time that we’ve been blogging. Archer Bagley, who is from Memphis, opened the first store in 2010. Bagley graduated from UT and had lived in Colorado and Georgia before moving back to Knoxville to become his own boss.

The chain has not been an unqualified success. Two locations of the chain closed, but he’s continued expanding, learning from the setbacks. When we visited Knoxville, four stores were open, with a fifth scheduled to open downtown a few days after our visit. The store that we visited is in the Bearden neighborhood, very close to some places that we’ve visited frequently, like Petro’s Chili and Denton’s, and, of course, McKay Books, which is where we headed after this meal. It’s in a really neat location, too. Somebody redesigned an old motor court motel into space for businesses, and Archer’s has the space that looks out over the road. Archer is a big fan of Widespread Panic; posters for the band’s albums and concerts cover the inside walls. 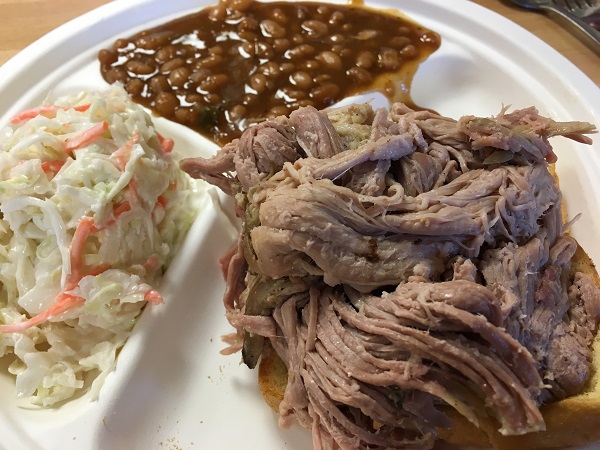 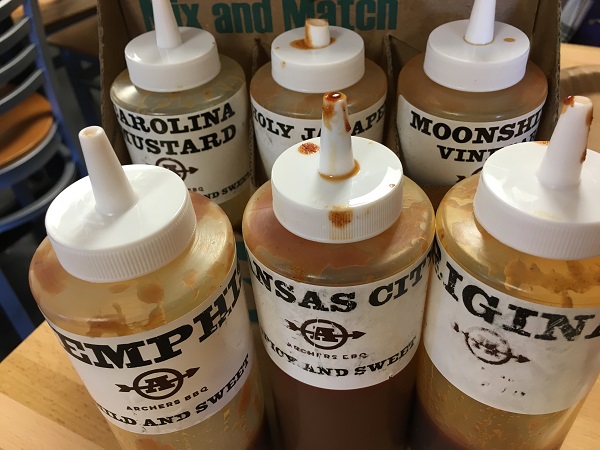 I tried the pulled pork and thought it was pretty good. The crew of two working the store explained that the meats for all the locations are smoked in a single commissary up the road and delivered fresh daily. They use a Southern Pride, and apparently when Archer started, he had one of the 500 pound units. He had to upgrade to one with twice the capacity in 2014 to keep up with demand. Apparently, using one kitchen has helped them a great deal in finding spaces. Their new downtown store is much smaller, and therefore less expensive, than a typical restaurant space. I have read some traditionalist types balking at such an arrangement, but I see the appeal, and all that really should matter is the taste of the meat. Again, the pork’s pretty good. I did think that the meat needed a little sauce, and they have six here to choose from. I enjoyed the mustard sauce the most, but they also have something for most every taste.

Since this was Memphis-style pork, I ordered the traditional Memphis sides of beans and cole slaw. The beans were awesome, and the slaw a typical mayo variety, nothing too special. My son asked for some chips and broke our hearts again. They make homemade sweet potato chips here, but he wasn’t interested. “Would you like some homemade chips, or a bag of air?” the employee asked, with honesty.

On a related note, I sure would like to find the no-account so-and-so who introduced my son to plain Lay’s. 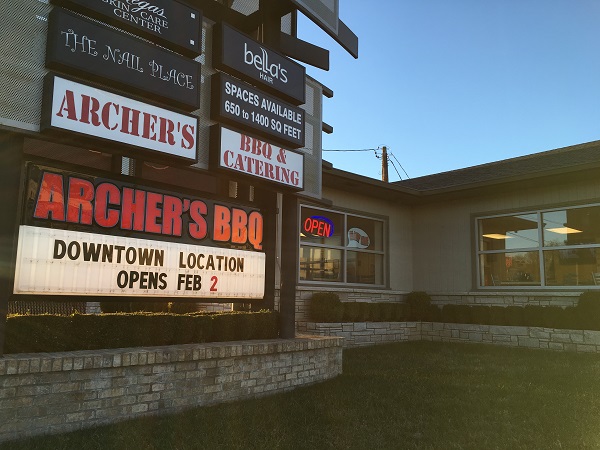 Archer’s was actually the second choice on this trip. I had originally planned to visit Scruggs on Magnolia Avenue, but like an idiot I left it too long. The infamous restaurant and package store closed not long ago after about thirty years in business. Looking around for more information about it, I found this interesting, albeit undated article by Jack Neely, “One man’s tour of Knoxville’s BBQ underground”. It seems like an old Metro Pulse story from the early 2000s or late 1990s, maybe? This might be the best story about the history of barbecue around this city that is available; the subject has honestly has not been covered as thoroughly as the Carolinas, or Memphis, or Texas.

Almost all of the places that Neely mentions in that story have closed. The next time the road takes us to Knoxville, we need to find someplace old and give it a little trace of permanence. At least as permanent as anything online ever is, anyway. Clearly, Archer’s, Dead End, and Full Service demand a place in Knoxville’s present story of barbecue, but, equally clearly, we should have been blogging twenty years ago. And also visiting Knoxville more frequently. What older barbecue place in Knoxville should we visit next time, readers?