I was last in the Piedmont Triad two years ago, and could not find a hotel room for love nor money. I eventually settled on an awful, awful place in Winston-Salem that was so grim that I couldn’t wait to review it at Expedia and warn whomever would listen that it was, literally, the Bates Motel. Of course, had I checked those reviews before I left, then I would have seen that four of ten previous reviewers had already called it that.

And the reason that I had such difficulty booking a room that March was because I had the bright idea to go around eating barbecue while the ACC Men’s Finals were being played in Greensboro, which is why I did not visit Stamey’s on that trip as planned. I detoured to Reidsville then, and went to Short Sugar’s instead. But that’s okay. Stamey’s was worth the wait. My daughter and I arrived about 5.30 on a Thursday evening and I had an awesome, awesome meal here. This barbecue is astonishingly good. Wherever you are, wherever you eat, you need to add Stamey’s to your to-do list. This place is something else. 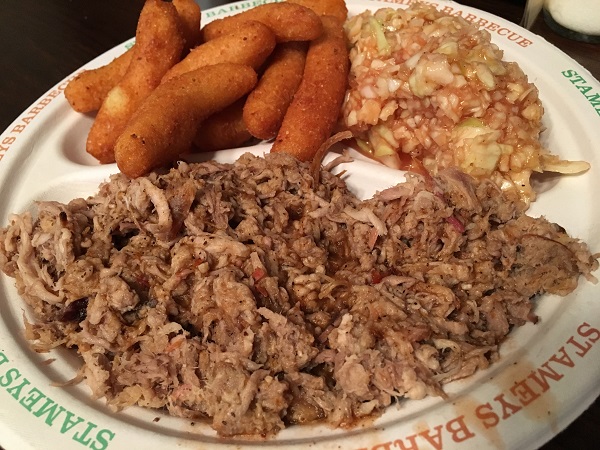 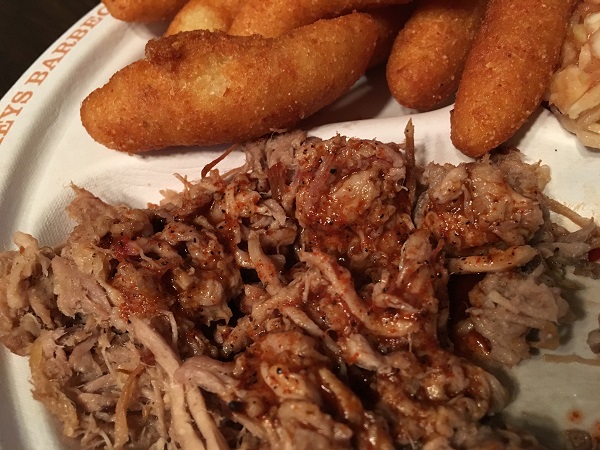 Stamey’s has been operating in Greensboro since 1953, but it has moved around a lot. Warner Stamey opened the original location of the restaurant in Shelby in 1930, and moved to Lexington in 1938, taking over his mentor Jess Swicegood’s restaurant. Swicegood and Sid Weaver are often credited with developing the Piedmont / Lexington-style of smoking and the sauce, and most of the older restaurants in the region trace their lineage back to them through Warner Stamey. So many pitmasters who would later open their own restaurants first worked in one of Stamey’s joints, arguably in much the same way that many of the restaurants in Columbus GA and Phenix City and Auburn AL trace their lineage back to the Gunters and Smokey Pig.

Warner’s grandson Chip is in charge of Stamey’s these days. It is a big operation, with a catering arm and dining for more than a hundred at a time. During the ACC Men’s Finals, people bring lawn chairs to wait in the line. Fortunately, my daughter and I didn’t have that kind of wait, and got seated very quickly. 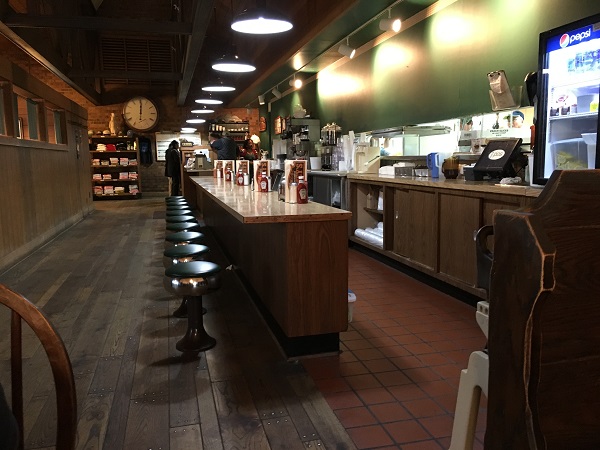 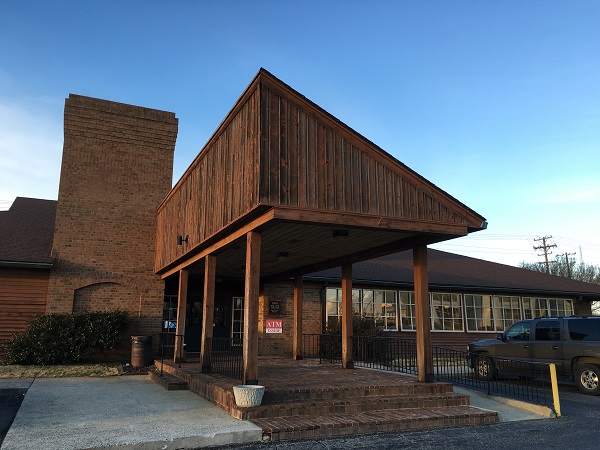 The meat is incredibly tender, and completely and totally delicious. While I didn’t love the slaw as much as I did the slaw at the previous stop, Fuzzy’s, this was the tastiest plate of pork of the entire trip. It is not overwhelmingly smoky, light enough to melt in your mouth, and does need a little sauce to really shine. But man alive, it shines brightly. This was awesome. If Greensboro has other barbecue restaurants, I’m simply not in a hurry to discover them. The next time that I’m in town, I’m coming back here again.

Ideally, any repeat trip won’t be one of five large meals in a single day. When I make these indulgent trips, I usually have the sense to order small, eat light, and only sample the food. On day one of this trip, however, every single meal was amazingly good, and every one better than the previous one, and I ate every bite of pork and slaw. My daughter had to roll me out of Stamey’s, and, exhausted, I somehow made it to our hotel in Winston-Salem (not, I stress, that same fool Bates Motel as last time). After I recovered, I changed into gym clothes, moseyed on down to the fitness room with a book, and I walked on that treadmill for a very, very, very long time, and slept like a baby.

I ate a whole lot lighter on day two, which started with a whole lot more exercise. More about that next time.

Other blog posts about Stamey’s Barbecue: