I was planning for our “Farewell Atlanta” week at the blog and wanted to visit four Atlanta restaurants that I enjoy that don’t get very much hobbyist press at all, the sort of fun, ultra-regional places that really only Atlantans know about. I wanted to write about the sort of places that, if Marie and I had been based in some other city all this time, we’d come to Atlanta on our road trips to sample alongside its barbecue. Honestly, Trader Vic’s wasn’t on my radar for such a visit, as I never really thought twice about this restaurant. It’s just a hotel restaurant, right? Oh, was I ever mistaken.

A few months ago, when I did a new story about the Colonnade, I found this incredibly neat blog called Le Continental, and read his story about Trader Vic’s (which, at present, is sadly missing many of the photos). It turns out this is one of the very few survivors of a once-thriving chain of Polynesian restaurants that have a legendary Tiki design and theme. In the late 1930s, a restaurateur named Victor Bergeron was looking to revive his struggling Oakland restaurant, then called Hinky Dinks, and found inspiration from a couple of Los Angeles-area restaurants that embraced the iconography of the south Pacific: Don the Beachcomber and South Seas. Hinky Dinks was refreshed as Trader Vic’s with a signature drink: the Mai Tai, which Bergeron spent the rest of his life having to talk about because sixty-eleven other people then claimed to have concocted it first.

Trader Vic’s was the final stop on our family’s farewell tour that day. After our lunch at Zesto, we drove across the street to park at the MARTA station, took the train to the Omni station – okay, okay, the “Georgia Dome Georgia World Congress Center Philips Arena CNN Center” station – and walked north across Centennial Olympic Park. We spent a few hours at my former employer, the Children’s Museum of Atlanta, giving our son a last couple of hours to play and giving me the chance to speak with some of my old friends and colleagues. I really do miss that place. And when that was finished, we walked up that hideous hill that I’ve walked up so many dang times, and across another five or so blocks, to the Hilton Atlanta on Courtland Street.

We had a few minutes to kill before the dining room opened, so the four of us took seats at the bar. I asked the bartender whether Trader Vic’s was always in this location, and he said that he thought so. One of our fellow guests suggested she knew a good deal about the place, and explained that the restaurant and the hotel opened together in 1976. That was earlier than I thought the Hilton opened, and thought it came later, but I evidently had it confused with the Marriott Marquis across the street. That should have been a much nicer and longer conversation about people like renowned Atlanta architect John Portman than it was, but my son was intent on spilling orange juice in his lap.

Incidentally, if you had a notion in the back of your mind that Trader Vic’s may attract several barflies in Hawaiian print shirts, that would be accurate.

Our meal was really fun, with great service and some unexpected little treats. The bread starter was accompanied by a dish of house-made peanut butter, and Marie’s masaman curry came with an assortment of veggies that you don’t receive at traditional Thai or Indian restaurants.

Our daughter had the salmon, which she loved, and I ordered the volcano shrimp, which comes in a mildly spicy sauce. Our dinner came to $100 with the tip, and while that’s not a splurge that we can often justify, I’m glad that we went out for this special occasion. The following Saturday, the girlchild would leave us for some summer vacationing with relatives, so this was our last chance to go out together someplace new and nice. 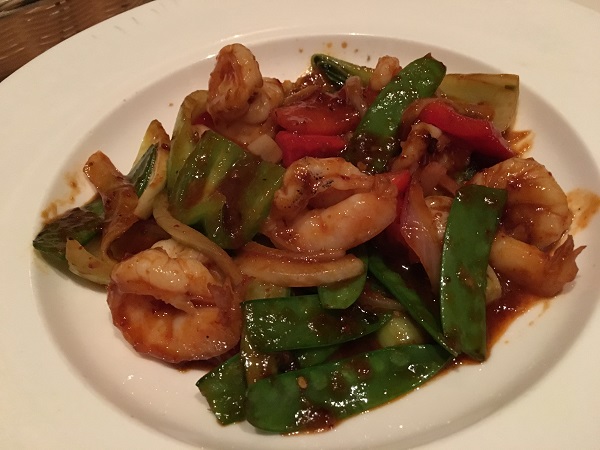 What surprised me the most about our visit to Atlanta’s Trader Vic’s is that I couldn’t find any other local hobbyists who have written about the place, other than our friend Bella Vivere, who visited last year at the invitation of the PR company. Has nobody else documented this cute place that’s been around for more than forty years? It’s certainly worth it! If you have a blog, you should check out Trader Vic’s and spread the word!