There are several Knoxville-area barbecue places that I’d like to visit sometime, and a few have been hanging out on my “one of these days” list for simply ages. But because I’m contrary, I dumped them all in favor of a restaurant that I’d only read about the night before. Sweet P’s Barbeque and Soul House is on the south side of the city limits, across a little bend of the Tennessee River from the town of Rockford. It’s located in a marina, so lots of boaters will come in for drinks and sandwiches before or after a day on the water. 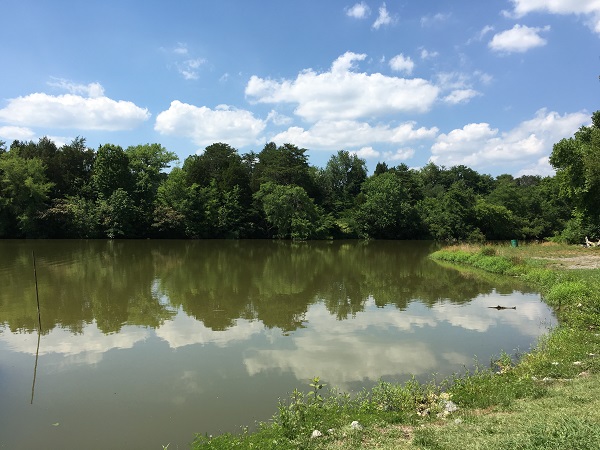 Chris Ford’s catering business is eleven years old. He started it not long after his band, Gran Torino, split up. The restaurant came four years later, in 2009, when his cousin Jonathan joined him in the venture. A second location opened downtown in 2014. It’s designed to be a “family juke joint” with live music from local and regional acts, and the chopped pork is fantastic. This was the third barbecue place we’d stopped on this trip and by leagues the best of the three.

After our snack at the Original Freezo, my son and I visited Comic Exchange, a really good shop on Chapman Highway where I bought him some superhero funnybooks, and took some new pictures of the “good food” sign in our logo. Then we took another photo stop at the big ice cream sign of Kay’s Ice Cream and drove through some twisty old neighborhoods to get to Sweet P’s.

The setup is a cafeteria line, with chopped pork, chicken, ribs, and brisket. I really would like to come back and try the brisket, because these guys know how to do chopped pork. The meat is really smoky and not too dry at all. It’s so flavorful, and just downright excellent, really. There are three sauces on the table: “thick,” which is the typical sweet brown ketchup-based stuff you find in the area, “thin,” which I much preferred, and “hot,” which adds some chipotle pepper to the thin sauce.

I really didn’t need either of the sides, but I was glad that the slaw was more like freshly-prepared vegetables, and not the “mayonnaise soup” that I’d received from the two barbecue joints earlier on the trip. I got the mac and cheese for my son. I had a bite and it was also pretty darn good.

After we finished, we briefly looked over the restaurant’s fascinating and fun collection of memorabilia from the 1982 World’s Fair and got back out in the ugly heat before heading back into the city. We shopped for books and movies at McKay for a little while before going to meet my daughter, and then we took her to get dessert.

Are you planning a barbecue road trip? You can see all the barbecue restaurants that we have visited for our blog (more than 390 !) on this map, with links back to the original blog posts!