One of the neatest discoveries that I’ve made since moving here is finding there’s a small chain of burger joints I’d never heard of before, each quietly doing their own thing at locations dotted around the city. I visited three of them across five days to see what I could learn.

Driving around anyplace, I try to keep an eye out for interesting and old restaurants, and as the weeks of the summer passed, I found myself noticing Armando’s locations wherever I went. There’s one in Hixson, and one on Highway 58 on the north side of the city limits, and another in East Ridge on Ringold Road. But what there isn’t is a single web site with all their locations listed. That’s because each of these old hamburger places, while taking a franchise right, remains fiercely independent from the others. It’s a situation kind of similar to the Gus’s Hot Dogs around Birmingham, if you remember our stories about two of those.

I count seven Armando’s at present. Six are in Tennessee and one is across the line in Rossville GA. An eighth, in Red Bank, closed a couple of years ago. A ninth, in St. Elmo, closed even further back. Those are all the ones I’ve been able to trace, but any business that’s been around since 1969 might have had all sorts of ups and downs I haven’t been able to determine. 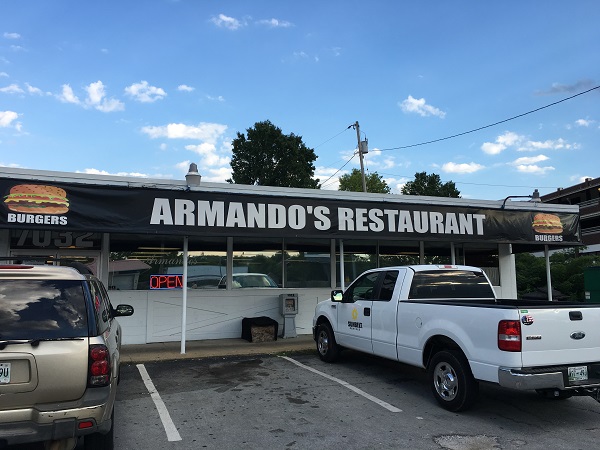 One Saturday in September, we were in the mood for burgers and so we visited the Armando’s nearest to us, on Lee Highway. While they’re open for dinner, it’s really more of a lunch place. We didn’t have the restaurant entirely to ourselves, but it was close. The burgers were pretty good. Like the other Armando’s locations, they have a variety of basic sandwiches, ham, grilled cheese, bacon, turkey clubs and the like. Not a whole lot here that didn’t come from a truck, to be sure, but I like the feel of the place. It’s a simple, no-frills and inexpensive meal. After speaking with the woman working the register, I figured I should try a couple of the other stores in the quasi-chain and see how they compare.

A couple of days later, I drove over to the original Armando’s for lunch, and a radically different experience. It’s on Main Street, in a predominantly industrial part of town, and it was really busy. With everything cooked to order, and the meat ground fresh daily, there was a very lengthy wait and a huge mob of people grabbing bags for their lunch break. This was just a little bit after eleven, too, with the crowd getting bigger as the noon hour loomed. The menu is very similar to the one on Lee, but the burger was much better as well.

This Armando’s location kind of reminds me of Wally’s, which is about two minutes away. They each serve an above-average burger to a big, mixed crowd. White collar, blue collar, black, white, both places get a huge lunch rush and there’s not a lot of space to linger. Somebody in the parking lot wants your space.

So the third, and for now, last of the Armando’s locations that I’ve visited is on East Brainerd, not far from the Mojo Burrito and Lupi’s where we occasionally eat. Confusingly, while it is not on Lee Highway, it is called Lee’s Armando’s. Lee and Keith Miller opened it in 1987, and while the burger is certainly a good one, they have a really great secret weapon among their sides. 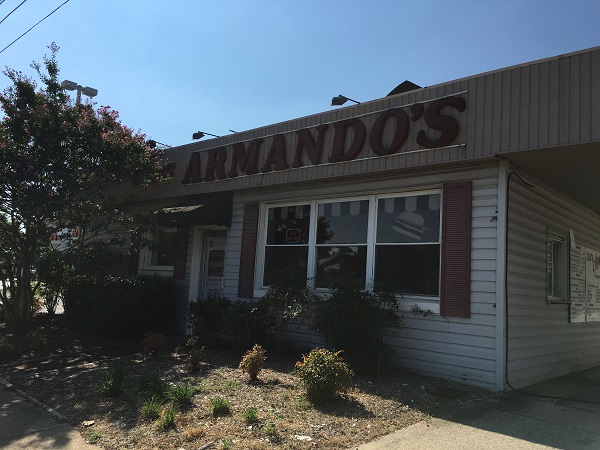 They’re called “Texas Toothpicks,” and they are sliced, fried jalapenos. They’re delicious by themselves, but drop a handful of those on your burger and your mouth will love you for hours. They’re so good that I’ve been threatening to go through this location’s drive-thru for a midday snack of ’em.

Overall, my visits to Armando’s have been a pleasant surprise. I love small chains like this, even if each location is independently owned and operated, and the burgers are a step up from fast food. I was very glad to learn that Chattanooga has a nice little story like this to uncover.

Do you enjoy classic adventure TV? I’m reliving some great shows from my own childhood with my five year-old son. Come join the fun at Fire-Breathing Dimetrodon Time!