After a run of disappointing dinners, my spirit of discovery was low. Then I got smacked by the smack ’em sauce at this fish house on MLK and could not have been more thrilled.

You can thank my friend Lia from The Cardigan Kitchen, indirectly, for me finding this place. She wrote me to ask about Chef La’s Fish Fry in Smyrna GA, one of a hundred Atlanta-area restaurants that I’m missing. That got me wanting some fried fish, seriously. The way our luck had been running at the end of the summer, I was afraid I’d end up at Captain D’s and just not tell anybody. But I opened up Yelp and found this little place which Larry Torrence and his brother Kevin opened in the spring of 2013. Man, is it ever good.

The Torrences and their crew won our loyalty with their fantastic, welcoming attitude. Everybody who worked there asked how we were doing, and everybody who came in behind us got the same welcome mat rolled out. On television, Louisville began their game with a scoring drive against FSU – the first of a previously unheard-of nine against the Seminoles – and most everybody shared opinions about the game. I’d have been happy to have sent Marie and our son home and just watched the whole first half and ordered some more fish. This place is that comfortable and relaxed. 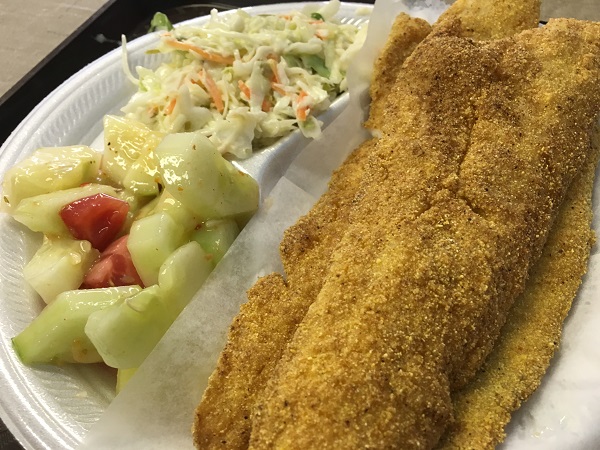 I had the whiting with cole slaw and cucumber salad. The sides were pretty good, but I figured I’d be more likely to have a sandwich in the future. Several sandwiches. This whiting was completely amazing. The batter is just crisp enough, and they source some good fish here. It’s seasoned just perfectly. Marie had the shrimp and while she wasn’t as taken with that, she shared some of our son’s whiting sandwich and really enjoyed it as well. 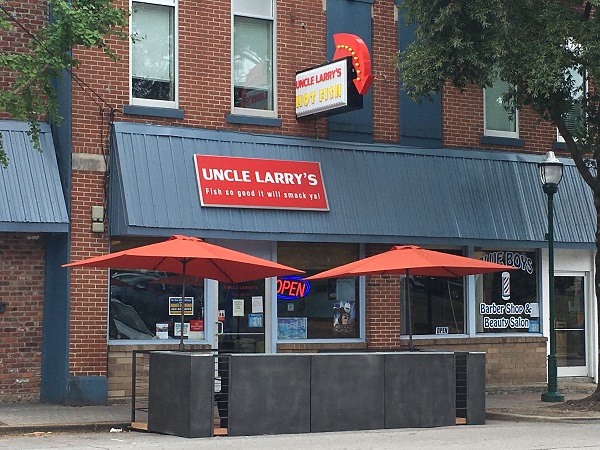 I went by the next Friday and ordered a catfish sandwich with cajun spices. Hold the phone. I loved that whiting, but this was unreal. Apparently one of the popular ways to dress a sandwich here is to drown the fish in mustard and hot sauce. I can’t quite get behind that because the fish is just too good to drown. However, they do have a delightful little special sauce you can ask for, and a little of it goes a long way. It’s called smack ’em sauce, and it’s kind of a spicy tartar. I put a little of that between my catfish fillets and was in heaven.

On our first visit, Kevin told us that they’ve done so well the last few years that they’re expanding. A second location is going to open in Ooltewah in the very near future. If you don’t feel like driving downtown, then definitely keep an eye open for this new spot. It’s one of our favorite local restaurants and we hope you give them a try!