We visited eight new-to-me barbecue restaurants on this trip. Three of them are punching their way out for second place, but the runaway winner was this amazing joint on the outskirts of the Raleigh metro area, the very last stop on my quest to visit all twenty-three of the restaurants on the North Carolina Barbecue Society Historic Trail.

Paul Stephenson opened this restaurant in 1958, and his son Andy inherited it when his father passed away fifty years later. They smoke shoulders here over hardwood coals and there’s said to be a crowd at just about all hours. We arrived about an hour before they closed on a Thursday. Experience has shown that we have better luck with great barbecue earlier in the day, and that these places tend to be busier at lunch. But they were better than 80% busy, and the pork was completely outstanding, very much worth the long delay getting here.

Before we got to the restaurant, we got to experience the delights of the Research Triangle rush hour. I’m not sure why all those Yankees choose to Relocate to the Containment Area of Cary; the traffic is utterly miserable. At least when I-40 dipped away from things, the crunch eased, and at least we had about four stations on the left of the dial to give us some good music while we crawled. Hats off to the good kids working college radio at UNC, Duke, and NC State. Y’all are doing great work.

This pork is completely terrific. They give it a little sauce in the kitchen, but I recommend shaking up the vinegar-pepper sauce and giving it just a little more. It’s delicious. I ordered the pork and stew plate that has a smaller portion of pork. That was probably a mistake, but I’ve had very little Brunswick stew in North Carolina and was curious what it tastes like here. It’s a good, thick brew, maybe a little heavier on the lima beans than I might like. In the end, I found myself regretting this, because I wanted more of the pork. The stewed apples and freshly-cut fries were very good, but I’m telling you, I’d have been just fine with a whole lot more chopped pork.

It took me several trips, and I certainly didn’t do them in order, but with this restaurant, I finally visited all twenty-three of the places listed by the North Carolina Barbecue Society on their “Historic Trail.” I started this quest in 2013 at Herb’s, outside Murphy. It took four dedicated trips to get to all the rest, but I did it and I’m darn glad that I did. I had some terrific meals following that map. About the only downside – and this is really a complaint only a blogger would make – is that our blog’s coverage of the Tarheel State is unnaturally skewed toward the places that have been hyped and celebrated.

There are no undiscovered barbecue gems in North Carolina at Marie, Let’s Eat! like there are in Georgia. Maybe one day, financial fortune will smile on us and we can justify a long return visit or ten and write about some other great restaurants here that haven’t had much press or attention. I would certainly love to spend a couple of days in Raleigh itself – a famous place called the Mecca had actually been on the day’s to-do list, but we were so far behind schedule we had to drop it – but right now we just don’t have the resources. 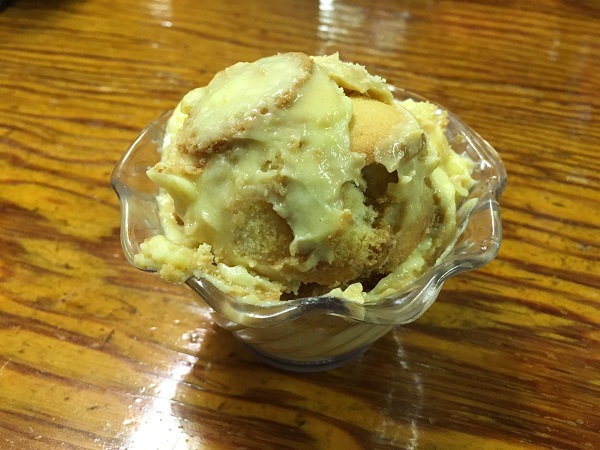 I finished eating and made contented “mm” sounds while Marie and our son enjoyed desserts. She was very pleased with the banana pudding. The sun, going down when we arrived, had disappeared while we ate. The original plan had been to drive north to Greenville to stay the night, but the floods left in the wake of Hurricane Matthew prompted me to reconsider, and we stayed in Benson instead. Those floods would have a pretty calamitous impact on the second day of our trip…

Other blog posts about Stephenson’s Bar-B-Q:

Are you planning a barbecue road trip? You can see all the barbecue restaurants that we have visited for our blog (more than 400 !) on this map, with links back to the original blog posts!