My son and I took a break from all the gaming in Memphis, and found a blast from my past to provide us with cookies and a ham sandwich.

After breakfast, we all went back to Marie’s sister’s apartment. Our son got some attention as everybody built Lego creations with him for several minutes, but eventually the grownups were ready to retire and play games that he won’t be ready to play for many more years yet. Since I’m not going to be ready to play those games for many more years yet either, he and I took a nice, long walk around the neighborhood and along Union Avenue. There, we spotted a restaurant’s old sign and it tickled an old circuit in my memory banks.

I just barely remember Danver’s Restaurant from my childhood. That built-with-logs logo and the tiffany lamps are almost familiar, but not quite. I’m certain that we ate here at least once when we were kids, even though my mother does not remember it, but everything about the interior layout – the lamps, the salad bar, the menu of burgers, roast beef, and hot ham sandwiches – was something I’d seen before. This was once a chain with some spread through at least five or six states, but today it’s down to just four locations in Memphis and one across the border in Olive Springs MS. The store on Union was most likely built as a Wendy’s. 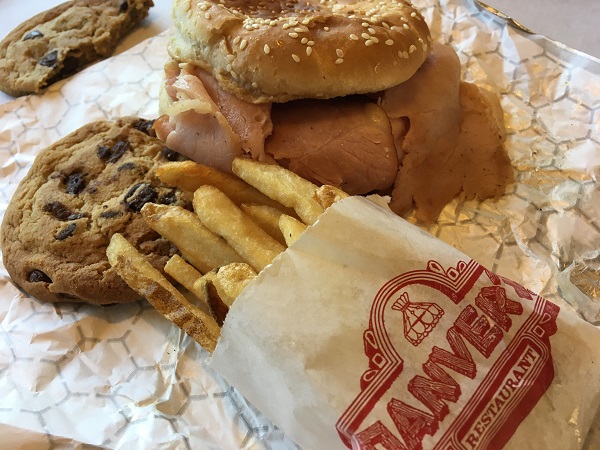 Between friends on Twitter and the regulars at roadfood.com’s forum, we’ve placed Danvers in the following cities:

Do you know of any others? Leave us a comment!

As for the actual food and not the old geography of nearly-forgotten restaurant chains, my son and I shared a hot ham sandwich and fries and a couple of cookies and called that a good snack. We still had some hours to kill before Marie and her family were done with their games, so we walked around another couple of blocks, during which he conspired to somehow traipse in every other homeowner’s yard in search of the perfect twig. Then we returned and resumed building Lego battle cruisers and rescue vehicles while waiting patiently for games to finish. There was legendary-good barbecue waiting for us an hour away.