Far more frequently than I’d like, Marie and I will split eating duties at two different restaurants when we’re traveling and she will have a considerably better meal than mine.

One of the last stops on our trip to see family in Memphis was breakfast. Actually, it was second breakfast. On the way to Stone Soup, our son started a discussion from the back seat about the neologism he coined (First Breakfast is Breakfast, and Second Breakfast is Beckfist), along with some careful inquiries into the specific and definitive differences between Beckfist and Brunch. Our hobby is turning our son into a hobbit, I’m afraid. He isn’t entirely at full status, though. He didn’t want to order anything at Stone Soup, despite the offer of sausage or fruit or whatever he wanted, saying he’d had enough at First Breakfast. He chose a cranberry juice and wanted nothing else (at least until my food arrived – luckily I’d ordered with the intent to share if he did that). Stone Soup offers breakfast and lunch but we all had breakfast this time (neither beckfist nor brunch for me – I’d only had tea earlier).

Anyway, when we were planning the trip I wanted to have a morning-ish meal of some kind with my siblings before we left town and asked for recommendations, out of which Stone Soup was chosen. Grant wanted something else, which is why we had First Breakfast. While we were there, Nikka revealed that when her best friend says “Let’s go out for breakfast” it’s known without discussion that they will be eating at either this place or the one down the street where we’d just been. 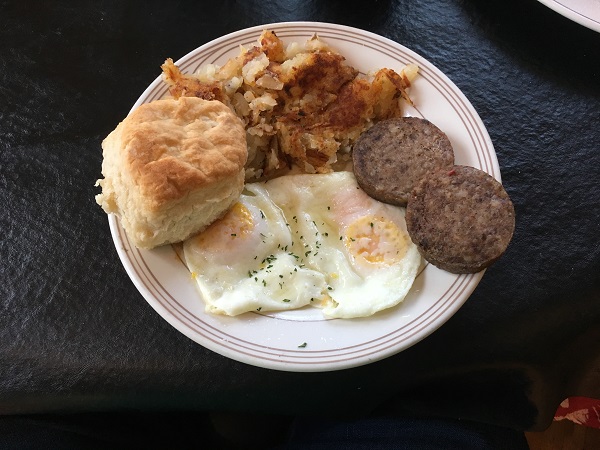 Stone Soup is more of a Modern American style of place. It has been around only a few years, having been opened in September of 2011 by chef Sharron Johnson after people missed her previous restaurant, Buns On the Run. The options at Stone Soup are a little more varied than at a more traditional breakfast place, ingredients change periodically as it uses farm-to-table sourcing, there is more of an emphasis on appearance, and the prices are a little higher. As a direct comparison, my husband’s giant plate of bone-in ham for First Breakfast cost about twice as much as the small side of ham I got, and sure looked like a lot more than twice as much meat. However, the quality of the ham on my side plate was better.

Service isn’t particularly fast at Stone Soup. It seems to be the kind of place you go to hang out for a while with friends and chat over good food, as opposed to a place to load up efficiently on tasty calories before going out and doing stuff. 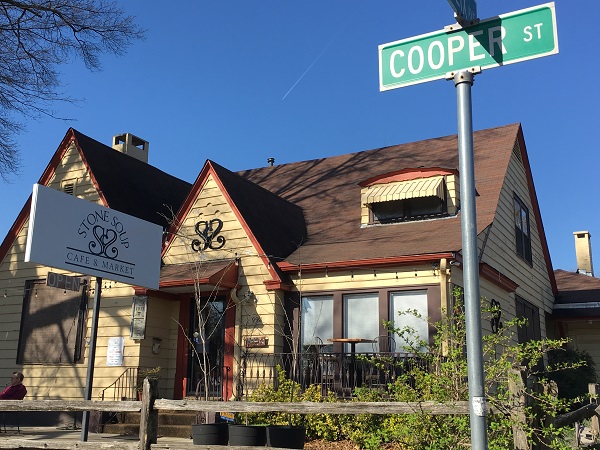 One of the challenges of a place that has a lot of good options is that if you are from out of town you don’t get to have everything. This is the sort of restaurant where you pass the other tables and realize you can’t have everything they’re having because you have only one stomach. For instance, none of us got any of the bread or toast, though we saw big big tempting slabs on other plates. Well, my sister had the French Toast made from the same bread, but that isn’t the same. I so much regretted not having ordered any that I got a loaf to go and just split it with my her so neither of us would have a ridiculous amount to deal with. I toasted mine with some cheese on top that my brother gave me, and was happy.

There isn’t a lot in the Market portion. Most of it is jams, handmade aprons, and the like. The dessert display takes up much of the available space, as well it should. I wish we lived closer so I could check out some of the options.

Note: I saw a review that mentioned they were cash only, but that is no longer the case.