A tip from one of our favorite local bloggers sent us north about forty-odd minutes to try the lowcountry-inspired dishes at this neat locally-owned place, and we followed that up with a really terrific hike.

A couple of months ago, Mary at Chattavore wrote about a recently-opened spot called Carrabelle’s that serves regionally-inspired dishes. It’s now about seven months old; it’s owned by the same people who run a very popular classic American restaurant called JacobMyer’s and they decided to do something a little different.

For now, this is the only Carrabelle’s store, but our eyes were looking for a small mom-and-pop and we drove right past it. It’s in a large outparcel building in front of a hotel,
and it looks very corporate, with professional signing and a ready-to-franchise feel. We asked about the slick and professional look and learned about the owners’ long experience running JacobMyer’s, and also learned that restaurant was temporarily closed. A really huge storm had come through at the end of March and damaged the building, displacing many of the employees, but they’d brought as many of them to Carrabelle’s as they could fit into the schedule. Marie told our server that she was happy to hear about the owners’ loyalty.

We followed Chattavore’s recommendation and ordered the really great fried green tomatoes, allegedly to share, but I like these a lot more than Marie does anyway. They’re served over a bed of unusually dry pimento cheese grits and come with a little side of a cajun-spiced mayo. Should anybody in your party order fries – and we have a kid, so that’s a safe bet – hold onto that mayo because it makes an amazing fry dip.

Marie ordered some trout from the specials menu, along with cinnamon apples and some slaw that was the only thing we tried that we didn’t really enjoy. The trout was completely wonderful. 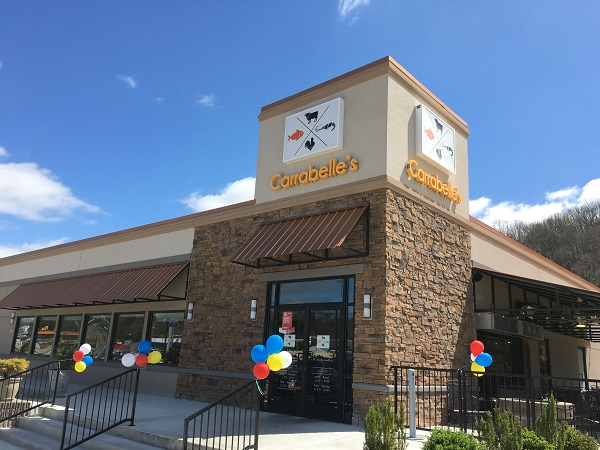 As for me, I ordered the jambalaya pasta, which I probably shouldn’t have done, because I’m trying to cut carbs after relying too much on pasta for the last ten years as a quick meal and paying the price. But the description on the menu sounded incredibly good and I’m weak, I tell you. Anyway, I really enjoyed the terrific, medium-spicy cream sauce and while I only ate about half of the pasta, I really loved the sausage and shrimp. This is a great little dish. I would try to avoid the temptation and order something different next time, but I’d happily recommend you try this yourself!

We really enjoyed lunch, but we enjoyed the next part of our day even more. We drove a few minutes north and spent a few hours hiking the Laurel Snow Trail. Parts of it are pretty strenuous for an overweight guy like me, but I managed all right. The trail uses the paths of some old coal roads and you can see one of the long-abandoned mine entrances. A critical bridge was out, so we were not able to make it all the way up to what’s said to be a glorious overlook – we’re not quite equipped for river crossings – but we really enjoyed it and will probably go back to Dayton and hike it again someday.

If you enjoy classic adventure television and movies, then come visit our other blog, where we’re enjoying thrilling shows from the seventies in the company of our six year-old son. It’s called Fire-Breathing Dimetrodon Time and it’s updated several times each week!