In the last honeymoon flashback, I told you about the breakfast that we enjoyed on the fifth day of our trip, at Manchester’s Red Arrow Diner. After that, we buckled up and got back on I-93 and drove south to Boston, where our friends Mike and Prairie live. Technically, they live in Cambridge, and lent us a guest parking pass for our dashboard so that we could avoid the pretty crippling parking charges in this place.

You may have heard that driving in this city is something of a challenge. You may have also heard that I don’t much like driving in Toronto. I would rather drive blindfolded in Toronto than mess with Boston traffic again. Between poorly-marked streets, traffic circles, traffic triangles, and what Prairie explained to us as a general understanding in the city that there is always one more lane than is actually marked, I was a little “country mouse in the city”-ed by the town. Turn signals, in Boston, are for the weak. Prairie was good enough to set us up with a Charlie Card and directions to get our walking tour started, intending to meet up with her and Mike that evening. Actually, it’s okay that Boston is a driver’s nightmare, because the city has an awesome public transportation grid and is very pedestrian-friendly. We walked a few blocks through Cambridge to Harvard University, looked over the cool buildings and then did a little shopping.

There are two comic shops within a baseball’s throw of each other here. New England Comics was pretty darn good for what it was (principally mainstream stuff), but Million Year Picnic was the real revelation. I’ve heard of this store many times over the years and it didn’t disappoint – they have a fantastic collection of books from publishers across the spectrum. They carry 2000 AD, always a pleasure to see, and I found two books here that I didn’t even know that I wanted. Both of these shops are within one minute’s walk of the Harvard T station, so we took the subway across the river to city center and found our way to the visitor’s center, where the Freedom Trail tour starts. We walked the first mile-and-a-bit of the trail, enjoying several gorgeous historical buildings and sites. I was particularly intrigued by the cemetary where Paul Revere and John Hancock are buried, which is full of gorgeous old headstones with Puritan death-markings. There were lots of winged skulls in evidence, as opposed to the cherubic angels which would dominate cemetaries in time.

Eventually, the Freedom Trail brings you to Fanueil Hall, which was the old Boston merchant marketplace and which is now an indoor/outdoor mall. We got sandwiches from one of the shops in the food court – it didn’t look like a chain, anyway – and concluded that we probably couldn’t walk the next giant leg to get to the USS Constitution and back before 6 pm. Besides, our feet hurt. So we took a water taxi (after some map confusion as to where, exactly, it landed) across the harbor to see where Old Ironsides is docked, undergoing renovations.

The tour took a lot longer than planned, although it really was fascinating. Our feet were pretty darn sore by the time we got back to Fanueil Hall. There, the formerly-local singer Bleu was giving a well-received instore at Newbury Comics, which is less a comic shop than a CD/gift store. As a comic shop, it’s not bad, but seriously overshadowed by others in the city. Mike and Prairie are big fans of Bleu, so we found them, snapped some pictures, enjoyed his music and bought his latest album.

The rest of the evening was great fun. We walked over to the old Customs building, which is now a Marriott property, but they keep the historical interior up and open to the public, and then down to where they were parked. We drove back out to Somerville (which is a separate town, but feels just like another neighborhood since Boston is so agreeably filled-in) to visit Mike and Prairie’s favorite comic shop, Hub Comics. Knock me down if it isn’t just a hair better than MYP, in my opinion. Of course, I might be biased by their having one of the 2000 ADs that Diamond did not ship to us down here in Georgia, but it really is a terrific shop, with a whole pile of stuff. Regardless which of the two you prefer, Boston is certainly home to two of the five best shops in North America, I’d say. (But then, I’ve never visited Isotope… yet!) 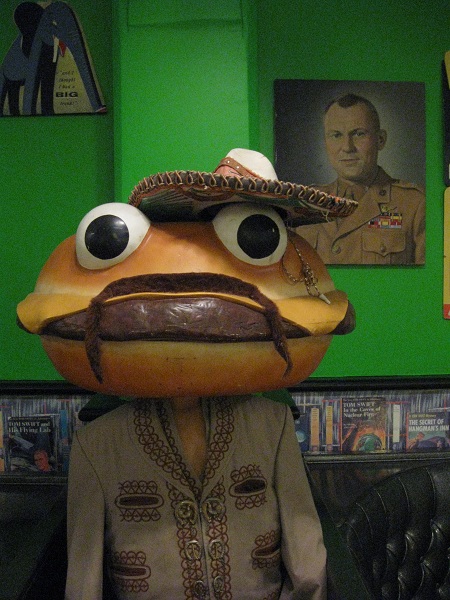 For dinner, we went to Friendly Toast. Prairie and Mike offered the caveat that the original location, in Portsmouth NH, is even wilder and better, but what you get in Boston is pretty wonderful, too. The interior is just a museum of crazy found objects and pop culture detritus, and the food is great, too. Inside, it looks like a cross between Lynn’s Paradise Cafe in Louisville and The Grill in Athens.

The Friendly Toast was quite new to Boston when we visited – the restaurant had only been open for about three months – but it had a wonderful reputation already. The owner, Melissa Jasper, had been collecting all the fun and silly decorations for years, and well-wishers had much more to give her when word got out that she was starting a second location in Boston. Nevertheless, the launch was kept pretty quiet. Word only leaked about the second store’s opening in February, and they were up and running before the end of April.

Since then, Friendly Toast has been racking up awards. The Boston Phoenix, and several of its rivals, calls it the best breakfast in the city. Esquire and TV’s Good Morning America call it one of the best breakfasts in the nation. Everybody wants to sample their King Cake, which is a pancake made with bananas, chocolate chips, peanut butter syrup and bacon.

Bucking the trend, we were actually in the mood for supper, though I believe breakfasts here are available all day. We shared some cheese fries which were served with a strawberry habanero sauce – far better than the name might imply – and my burrito with corn salsa was gigantic and tasty. Of course, now that I have read some reviews and looked over their menu in more detail, it looks like I missed out on quite a lot. It might be a long time before we can justify going back to Boston, but I figure that I know for that next time.