When Marie and our friend Victoria were each in the later stages of their respective pregnancies, we met up near their new apartment in the East Atlanta neighborhood for ice cream at Morelli’s, and resolved to get together again after our babies were born. Victoria and James were raving then about Delia’s Chicken Sausage Stand, a collaboration between Delia Champion, who started our city’s much-loved Flying Biscuit Cafe, and Molly Gunn, who I understand co-owns The Porter. Weeks went by, babies were born and I started getting impatient about when the heck we were going to get together so’s I could try one of these dogs. Or slingers, as the restaurant would like to term them.

Make no mistake, though. These may be called slingers or chicken sausages, but they are definitely from the same mold as hot dogs. This is a good thing, as Marie and I certainly love good hot dogs. The new take on them here is incredibly neat and fun and very tasty. Champion and Gunn are using buns baked by the popular Holeman & Finch and locally-sourced, organically-grown chickens for their meat. The results are just a little different from even the best hot dog places in town – America’s Top Dog, Barker’s, Brandi’s – and make for a very interesting and unique taste. Plus, they’re open absurdly late. Like four in the morning late. If I lived in that neighborhood, they’d be seeing me pretty frequently in the middle of the night! 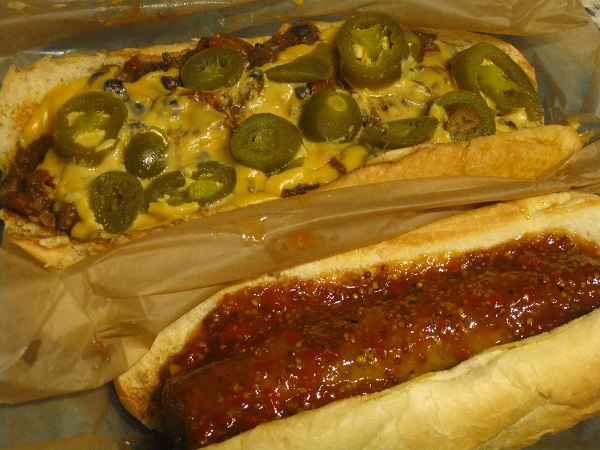 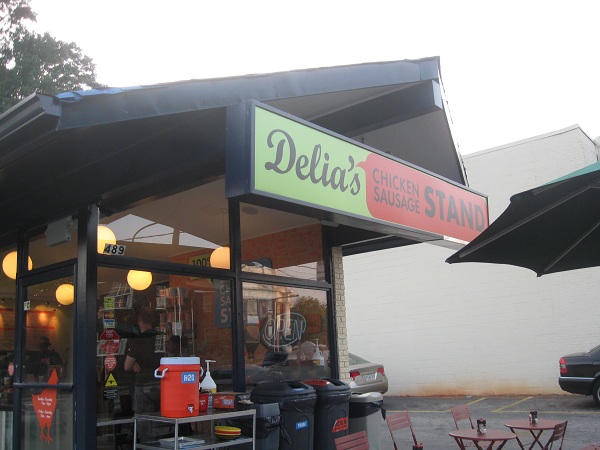 The one thing about Delia’s that does not please me is the lack of seating. There’s only a small indoor area with air conditioning to place orders, and six picnic tables outside to eat. As Atlanta enters its utterly miserable summer, this is going to keep us from paying them another visit for a few months. This is a real shame, because the food is quite wonderful.

Acting like I had not eaten anything in a month, I ordered both a Naked Slinger – far from naked, it was the sausage with their “comeback” sauce and a little of the firey five-pepper mustard – and their signature Hot Mess, a slinger buried under melted cheese, chili and jalapenos. This really is too messy a thing to eat in polite company, but somehow I avoided spilling any of it on Victoria and James’s couch.

Honestly, though, the sausage is so good that it doesn’t need all the crazy toppings. I really preferred the Naked Slinger, and thought that the meat’s flavor was really brought out by the mustard. Meanwhile, my daughter enjoyed eating the chicken as traditional sliders, and Marie had the Italian Stallion, which has the slinger served with onions, peppers, mozzarella and marinara sauce. Everything was really quite excellent.

I just amused myself, wondering whether the slinger could turn into an iconic Atlanta variety of dog, just like half-smokes are in Washington. I wish I had a TARDIS so I could pop forward a few decades and check that out.

Other blog posts about Delia’s: