Fat Matt’s is one of those places that is so small and so popular that I have never been a regular. I really don’t enjoy the challenge of parking at a place where it is such a chore to either get in or get out, and there have been more occasions in the past where I had planned to eat there, been discouraged and left than there have actual instances of me sitting down to some food and, most evenings, live blues. This is a pretty good place to eat, though. Sometimes, that discouragement that I’ve felt has bubbled into serious aggravation that the fates were against me.

For many years, they operated a second business in the building next door. Fat Matt’s Chicken Shack is now closed, but for a good while there, you could enjoy some of the best fried chicken in Atlanta. The only plus side to it shuttering is that there are one or two extra parking spaces available now.

Well, lines out the door are usually not a green flag for me to come eat, and indeed it had been many years since we’d stopped by for some food. Early last month, however, Roadfood.com added a couple more places to their small library of Georgia restaurants. So Marie and I buckled up the baby, promised my daughter a bowl of stew, and asked David to come along and eat with us. We arrived at 11.30 on a Saturday, right as they opened. There was one space available to park – behind the old Chicken Shack – and a line out the door. There’s always a line out the door. 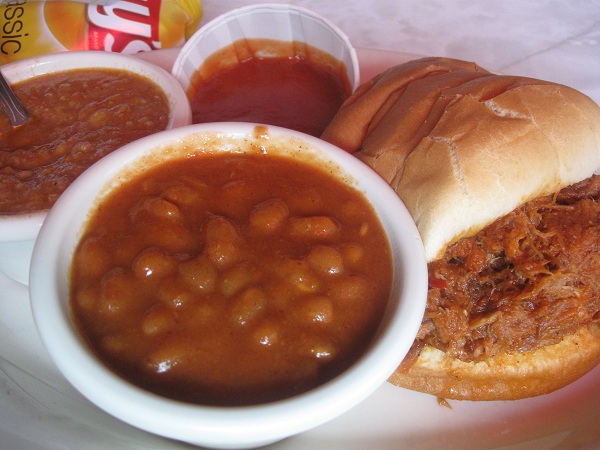 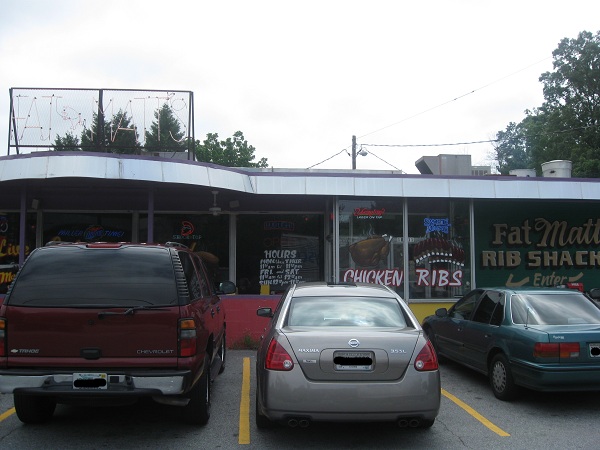 The review at Roadfood.com suggests that the building once housed a Krispy Kreme. It is certainly an old one, and it doesn’t seat very many, even with a patio. When there’s a band playing, it is packed and loud and sweaty and all kinds of wonderful, if you enjoy a slab of very good ribs in the company of lots of strangers guzzling beer.

How Fat Matt’s manages to make such tasty barbecue is a genuine mystery, as they roast over charcoal rather than wood. The meat is moist – perhaps overly so, as it comes presauced with their tangy red tomato-based mixture – and flavorful, but that unmistakable smoked wood taste that informs the best barbecue is not present here. For many years, fans have been marveling at how this place can break whatever rules that people hold dearest about barbecue so casually and still turn out such tasty food.

For my part, while the chopped pork is very good despite not being what I’m usually looking for in barbecue, I really wish they would not presauce it. I’d love to try it dry one day. The Brunswick stew is pretty good, but not among any of our favorites. The rum baked beans are just terrific, though. There’s just enough of a hint of rum to be noticeable, and they make an excellent accompaniment to the meat. I really love these! Honestly, the only thing this place does that I cannot get behind is serving up boring old Lay’s potato chips. If they must offer chips from a bag, I wish that they were Golden Flake brand.

After lunch, we drove the hop and skip – it’s not even an “and jump” away – over to Grindhouse Killer Burgers for dessert. David wanted to try one of these burgers that everybody’s talking about and pronounced it pretty good, while the rest of us enjoyed some malts. Marie had already made the bold claim that the chocolate malt here is one of the very best in the city. I had a vanilla and, honestly, it was pretty darn good, but not even close to being as good as the amazing malts at Chapman Drugs.

There’s a heck of a lot of good eating within walking distance on this leg of Piedmont and Cheshire Bridge. I’m curious to try Sheik Burritos some day soon. I’ll probably have to follow that up with a malt from Grindhouse as well.

Other blog posts about Fat Matt’s: