Last Thursday, nothing went right. I really wanted to go up to Athens with David and visit a couple of places I have not been for years, but Marie and I had an appointment in the evening back home that we couldn’t shake, so David and I wouldn’t have very long to visit before rushing back to town. Then I had the bright idea to leave my car downtown and have David come meet me, saving a little trip to the suburbs and then around the top end. I came up with this brilliant plan on the Thursday of market day at AmericasMart.

It’s my experience that most locals don’t even know what this big mess is, much less sensible out-of-towners. It’s a year-round trade show of various inessential wholesalers’ nonsense, unfolded under high security for retailers across the nation, but twice a year, the four-building convention space goes mad with a great big event with all the season’s latest tchotchkes, area rugs, and vases full of broken branches. All the downtown hotels are booked, celebrities are showing off some tomfoolery or designs or other, the price of parking increases at least fourfold, and the traffic on the connector coming in from the northern ‘burbs backs up solid to Buckhead one way and North Druid Hills the other.

Our potential time in Athens was already curtailed by David being delayed by, honestly, 45 minutes of backup, and it would be curtailed further by the reality that we’d have to navigate this mess a second time to pick up my car. Therefore, we’d have to leave the Classic City within minutes of actually arriving. So we put it off for a week and went for a nice long walk in Decatur instead.

I’d been wanting to lunch at No. 246, an Italian-“inspired” new restaurant opened by Drew Belline and Ford Fry, for a few months now. It’s another case of me hearing about a good idea, and by the time I get around to it, everybody else in town with a blog has had time to rave and tell everybody how neat it is. Marie and I are always very late to the trendiest places. You can tell this place is trendy; just look at the “cones of silence” hanging from the ceiling. For what it’s worth, I do like the open kitchen. I can’t imagine stepping past on the way to the gents’ and not pausing to watch the work going on there. 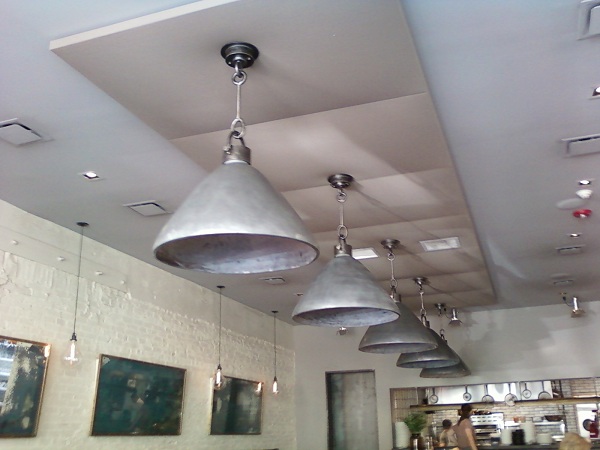 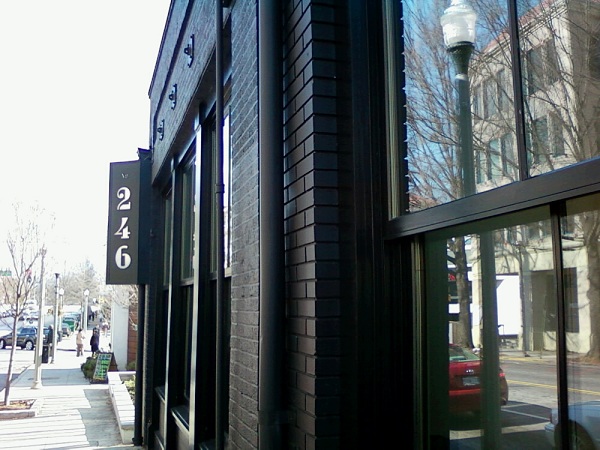 I really, really don’t think much of modern restaurant design, but Fry and Belline have certainly come up with some incredibly tasty food and I think the world of it. They do pastas, and cook quite good pizzas in a wood-fired grill, but it really is not an Italian place and nor do they claim it to be. While there are certainly meats on the menu, the real emphasis is on locally-sourced vegetables. My pizza came with some of the most delicious mushrooms that I’ve ever had.

One thing that I note upon reading what my peers have had to say is that David and I certainly played it far too safe. We were both pleased and satisfied with our pizza and sandwich, but take a look, for example, at the interesting things that Decatur Food and Wine Dude enjoyed, including a cucumber soup and parpadelle carbonara. I didn’t even have one of the celebrated No. 246 meatballs that I should have tried. This is definitely a restaurant that requires a little more investigation.

Hopefully, however, when we make it back, the music will be a little better. I was telling David about my visit to Sheik Burritos n Kabobs and how fantastic their playlist was, including as it did Modest Mouse, Vampire Weekend and Metric, all fine music to enjoy with lunch. Here, it was all Doobie Brothers and Tom Petty and “Stairway to Heaven,” like 96 Rock in 1983, and I swear the same station was being piped out of every last restaurant that we passed on the way back to the car. Somebody needed to give the whole city of Decatur a kick in the rear that afternoon.