This is Marie, contributing an article about a traditional Dutch treat that we got at the last visit to my parents’ place. Mom wanted to make oliebollen, which are a kind of proto-donut, because it’s a traditional New Year’s treat in the Netherlands, and I was more than happy to partake. The rest of the family was slightly bewildered at the sudden need to make fried goods in the middle of the day. You really do need to have a particular reason to make these if you are making them at home, and the near vicinity of New Year’s was not convincing since they are not Dutch.

We use the oil cooker out on the porch because I don’t know anyone who likes to have their house smell like hot oil; it’s also a bit of a chore to clean up. However, the results are definitely worth it. I’m not a huge fan of donuts; they’re often too dry or too mushy for me on the whole. Oliebollen are yeast-risen so they are dense and chewy and because they’re shaped with spoons before being dropped in the oil, there are always a few little crisp bits that stick out and get cooked a little harder. (Grant says that the result is like crossing a hush puppy with a funnel cake.)

In the Netherlands, they are actually available throughout much of the winter from street vendors. I recall one which was parked outside a shopping area on a cold November visit to Leeuwarden during a visit to my grandmother, who lived nearby in Beetsterzwaag, and seeing at least two dozen kinds, some sweet and some savory. Bacon or sausage oliebollen, sweet currant oliebollen, apple and cinnamon oliebollen – every variety you could think to suit any possible taste. I am drooling just holding the image in my mind of the food truck’s display case. As I recall, they were kept warm in long trays where the customers could see them, and given a quick pop into hot oil to freshen them up for consumption and to make sure the powdered sugar would stick, then stuck into a paper bag with a (very) generous scoop of powdered sugar, and shaken vigorously so the sugar would coat them thoroughly.

Mom’s oliebollen were quite restrained in size – hers were about golf-ball sized, while the ones from the food cart were more like tennis balls. You probably need an industrial sized cooker to do them that big, as the cooking oil would cool down too much to fry them properly in the home sizes. I had three and didn’t need to eat again for hours. You know that fake advertisement from Lake Wobegon on NPR, where they talk about the grease stains on the bag that indicate freshness? Well, you don’t want to put a bag of these on your lap. However, despite the cooking method, the yeast makes these treats not heavy, just dense and chewy and delectable. And probably the reason I don’t much care for donuts; they just can’t stand up to the competition.

The ones you see in the picture below had raisins and apples. My favorite is black currant, but these are very close behind. I really need to work more on yeast recipes. About all I do with yeast is make bread, and the wonderful chewy nostalgia-inducing treat of these oliebollen reminded me why that is silly and limiting. 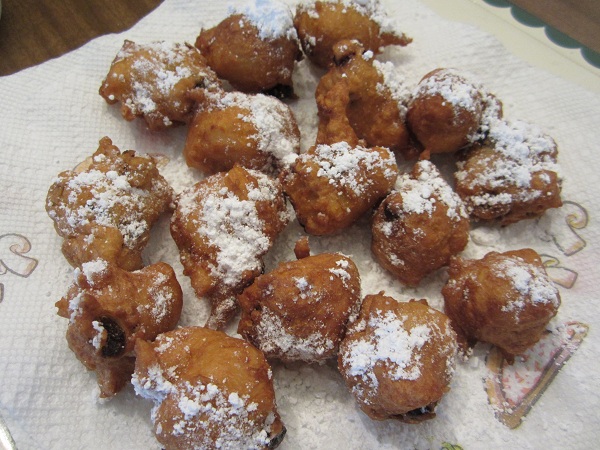 Her recipe would have been posted here, but it’s in Dutch and Metric, which are both foreign languages to most Americans, so here is the recipe as found in a more convenient form, from About.com’s Dutch food section:

Preparation:
In a small bowl, mix the teaspoon of sugar into 1/2 cup (120 ml) of hand-hot water. Sprinkle the yeast on top and allow to stand for 10 minutes (if the yeast doesn’t bubble, discard and buy new yeast as it means the yeast is no longer active). Stir to combine.

Cover the bowl with a damp dish towel and allow to rise in a warm area for about an hour. Once the dough has doubled, stir in the salt (and fruit, if using).

Heat the oil in a large, deep pan or in a deep fryer. To check whether the oil is at the right temperature, stand the handle of a wooden spoon in the oil. If little bubbles form around it, the oil is ready.

You will need two tablespoons to form and handle the dough, as well as a slotted spoon to remove the ‘oliebollen’ from the hot oil. Quickly dip the two tablespoons into the oil and form small balls of the dough with the oiled tablespoons, carefully scraping and dropping the dough into the hot oil. The ‘oliebollen’ will sink to the bottom of the pan and then pop right back up. You should be able to fry at least 6 ‘oliebollen’ at a time, but don’t crowd the pan (see Tips below). Fry until golden brown on both sides, carefully flipping when required. Drain on a tray lined with paper towels.

Sieve powdered sugar over the ‘oliebollen’ as well as a dusting of ground cinnamon, and serve warm.

I also want to give a shout out to The Dutch Baker’s Daughter, whose post about oliebollen from 2011 popped up while I was searching for a good recipe to post here, because of a recent post about banana bread cinnamon rolls, and also chocolate cinnamon rolls – both of which are yeast-based, and therefore excellent candidates for exploring more yeast recipes.