So there was this giant peanut that I wanted to see again.

In December of 2011, on our way back from Moultrie, we had passed a really big peanut statue on the side of I-75. I was going to be content to photograph it from the car, but by chance, it was almost right next door to our next stop. We were drawn into Carroll’s Sausage and Meats by their billboards, and, as we pulled in, we saw the peanut right across an empty field. The girlchild napped in the car, and Marie and the baby went in to shop, and I traipsed across the field to take pictures.

“Tell me, darling,” I asked her later, after I’d learned that you can actually drive right up to the peanut via a separate road and need not take the hundred-yard hike, “when you see me retreating into the distance, camera held high, off across some field to take a picture of a really big peanut, do you say to yourself, ‘God, I love that man!’…?” She replied with something scientific-sounding about enjoying the pleasure of other people’s delight. She didn’t actually say “Yes.” 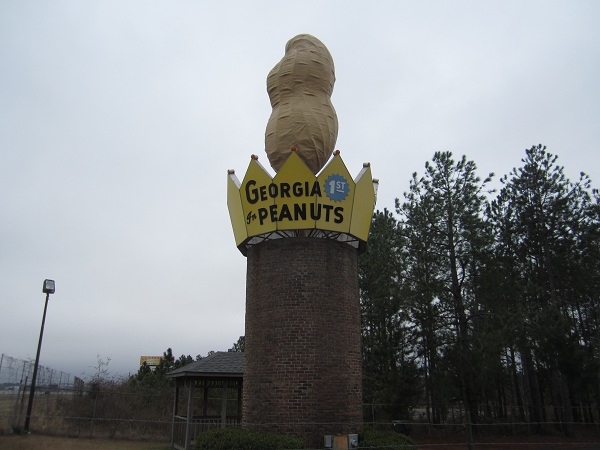 Thomas and Ann Carroll opened their sausage and butcher’s shop in Albany in 1988 and sold it to Hugh Hardy Jr. in 2001. He has expanded it into three stores in south Georgia, adding a location in Sylvester and this huge barn of a place facing the highway in Ashburn. They have a restaurant that serves breakfasts and meat-and-three lunches, but the attraction here was the meat counter in the back. Marie and I were very impressed by the operation, which will sell you anything from a single link of hot pork sausage to a thirty-five pound “freezer special” of seven different meats, but considered the logistics of transporting sausage all over south Georgia when we didn’t have a set timetable either to get to the island from here, or how long the trip back from the island, four days later, would take. We settled instead on some of their preserves and jams.

Incidentally, I was pleased to see that, among all their other groceries, Carroll’s stocks pickles and things from nearby Lauri Jo’s. I had only heard of this company the week previously, when I saw some of their goods for sale at Mountain Fresh Creamery, some two hundred-odd miles north in Clermont. 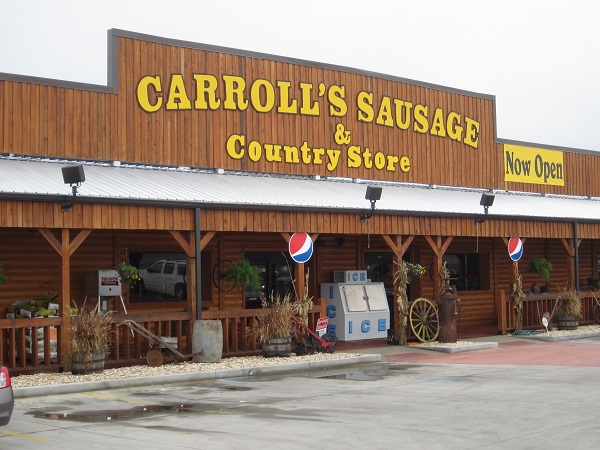 Now stocked with jams, we drove over just a few miles to a restaurant called Keith-A-Que, which Dustin of the (oddly on hiatus) Georgia Barbecue Hunt had mentioned last year. He wasn’t entirely pleased with this restaurant, which a local fellow named Keith Massey had opened in 1998. I wondered whether I might have better luck.

The short answer is no, I didn’t, but there are still a few things about this restaurant worth mentioning. Their main offering would be a chopped pork sandwich. As this is pre-sauced, I decided to try the sliced Boston butt. I got that as a plate with stew and onion rings. Well, as the picture shows, the meat is more what I’d call pulled than sliced. It is also, as you see, an utterly insane metric buttload of butt. I really don’t know that I can recall ever getting so much barbecue for so little money before. Unfortunately, I found it to be bland and dry, and not to my taste. But tastes vary, and I guarantee that guests willing to chance it will be pleased with the price. A similar amount of barbecue in Atlanta would cost a good deal more than the $7 they charge here. 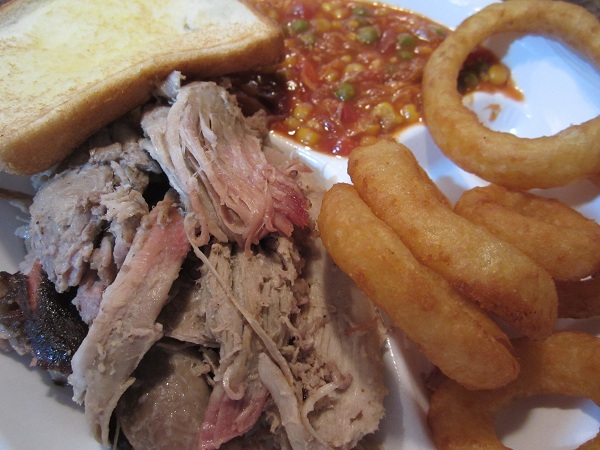 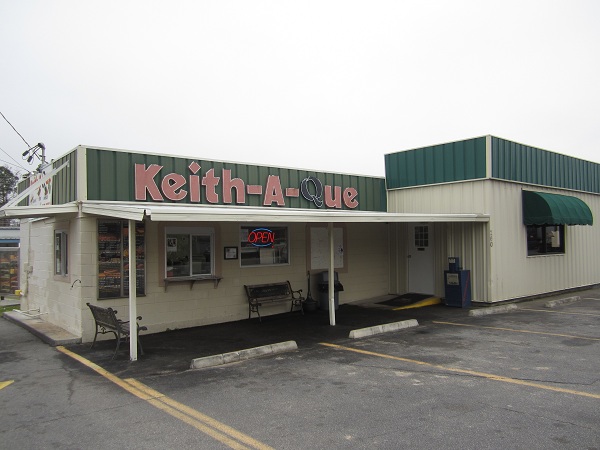 Marie went with the pre-sauced chopped sandwich and thought it was pretty good. The house sauce is a tomato-vinegar mix with a nice little tang. The onion rings tasted like ordinary delivery truck rings, but I did enjoy the stew. I’m always pleased to find neat little twists on the standard recipes, and this one includes peas, which we don’t see very often in stews. It was very rich and flavorful. So overall, it was a mixed experience, but not an unpleasant one.

We had a little circuitous this-way-and-that to go before returning to the interstate, because Marie’s Purse Alert (TM) went off and we had to retrace our steps, finding it in Keith-A-Que’s ladies’ room. From there, we went south to Tifton and picked up US-82. In the interest of good relations, I decided against planning any additional stops. I did let the ladies know that if I saw something interesting, I would pull over to take pictures, but otherwise, we’d go straight to Brunswick. I’m aware that there’s a fast food / soft serve drive-in around Tifton called Shady Lane, but I didn’t see it. Nor did I spot any interesting restaurants as we drove through Waycross. I did see Gary Lee’s Market as we approached I-95 and Brunswick, but this barbecue place, which comes recommended by several people at Roadfood.com, is close enough to that city that we can easily return some other time.

No, the only stop we made for the two-and-a-bit drive was on Tifton’s main street, to see this wonderful old movie house. I’m always glad to see these places still in business. 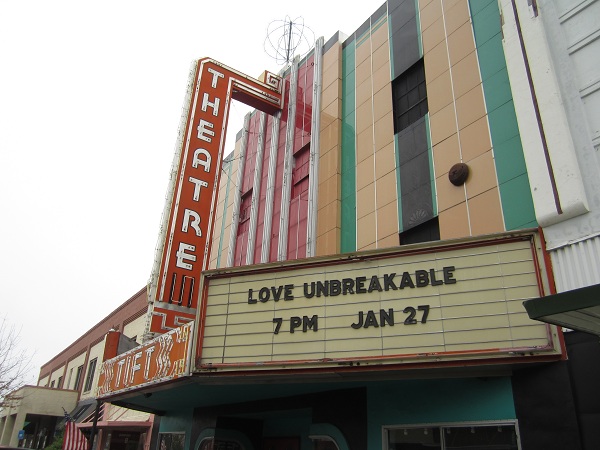 Other blog posts about Keith-A-Que: