For the three years that we have been blogging, we have tried to take alternate paths on our regular trips from Atlanta to Saint Simons Island. For one thing, I-16 is a total bore, and for another, we’ve wanted to cover roads rarely taken, and find restaurants, meals, and stories in smaller, out-of-the-way towns. We have always anticipated moving to Asheville – and perhaps will, later this year – and, when that day comes, the big, dull expanse of central Georgia will be amazingly out of the way. It’s best to tackle it now, which is why Savannah is so poorly represented here. There will be time enough for Savannah down the line.

But for starters, there’s the baby, and turning the six hour drive, with a single meal, on the interstate at 75-80 mph into a nine hour drive, with two meals, on two-lanes at 55-60 mph, is a real task for him. Marie has been patient with my desires to look here, there, and everywhere, but I’ve been robbing her mother and her father of valuable grandparenting time while taking pictures of old train trestles, art deco movie theatres, and giant peanuts long enough. It’s time to stick to the interstate, and stop in the Macon or Savannah areas only*.

So, with one final detour through lumber and cotton land ahead of us before we knuckle down and start getting where we need to be, we planned this most recent trip to Glynn County to take us south on I-75 to Tifton, and across the state 137 miles via US-82. This way allowed us to finally visit one of Georgia’s most renowned and storied barbecue shacks, the excellent Smoakies in the town of Cordele. Located just a mile east of I-75 and guarded by a dangerous cat – his cunning tactic is to curl up in front of your tires and prevent you from ever actually leaving the place – Smoakies is an absolute treat and has been worth the wait to visit. 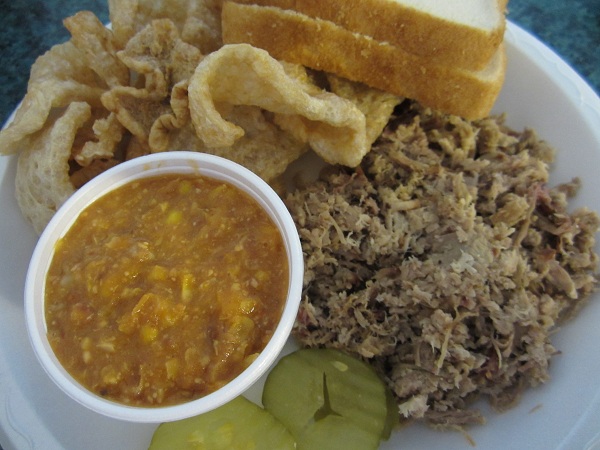 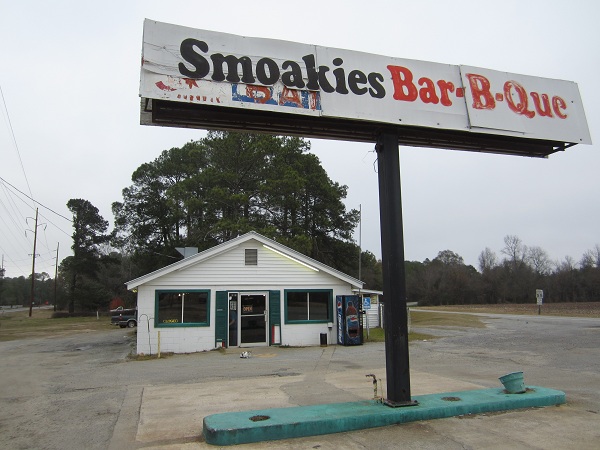 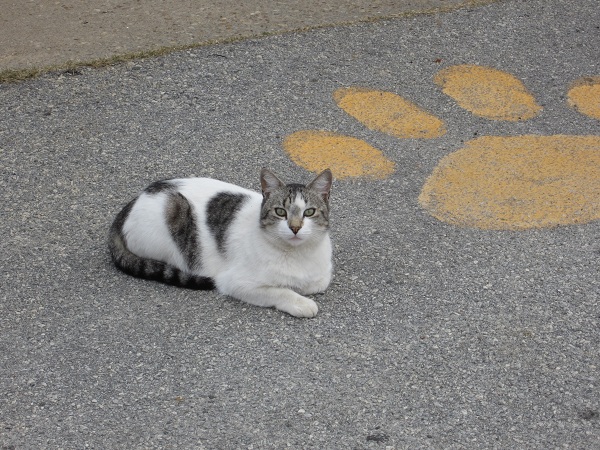 It is this cat, and not the owner, who is called Smoakie. Smoakie’s Fat Cat, to give his full name, first showed up a little more than a decade ago as a scrawny little kitten, and he’s been keeping the property safe from anybody who doesn’t want to kick back and relax after a really good meal. No, the owner is called Steve Southwell. He smokes his meat for six hours over oak each morning, which he finds just enough to give it a mild flavor, not too powerful.

Apparently, Mr. Southwell has not been content to rest on his laurels where his sauce is concerned. When we arrived, the Carolina-style vinegar sauce was not available. It had been rotated out of the order in favor of a mild mustard sauce. There were three others: a hotter mustard, and both sweet and mild varieties of a tomato-based sauce. They were all really good; I did not have a favorite among them. I enjoyed a chopped pork plate with a small cup of Brunswick stew and something you don’t see every day, fried skins. My daughter was skeptical, but adventurous enough to try them.

The restaurant is set up in what had been a filling station, and it smells musty and old inside. When we first stepped in, the aroma of once-damp carpet briefly overpowered the scents of smoke. I expect the place has seen some damage over its many years, but it just adds to its simple and wonderful character. The barbecue is good enough to speak for itself, and as I learned to my eternal pleasure and satisfaction many years ago when I first visited Paul’s in Lexington, Georgia, there is no simpler pleasure than enjoying awesome barbecue in uncomplicated surroundings.

We couldn’t stay; we had a detour to resume. Smoakie’s Fat Cat agreed that we had given his shack the requisite amount of attention, and allowed us to leave, but only after the toddler rubbed his tummy and stamped and giggled about it.

*Other Macon/Warner Robins-area joints we’d like to visit: White Diamond in Bonaire, AB’s in Hawkinsville, the Cree-Mee Dairy Bar in Unadilla, Grillmaster in Perry, JL’s in Macon, and the original location of Fincher’s. We’ll see whether we can’t tackle most of these before the end of the year.

Other blog posts about Smoakies: