We were invited to a launch party for the new Barrel Bar at a restaurant called Food 101 a couple of weeks ago. It’s a very interesting place; they use the slogan “New South Cuisine” and seem to have anticipated the trend by quite a few years. They opened in 1999 and are a spiritual antecedent of the restaurants and ideas that Hugh Acheson and Ford Fry have been popularizing, but they were perhaps so ahead of the curve that they don’t get much press or attention.

Marie and I got to talk a little with Chef Justin Keith, who is from down south in Jesup and knows very well the back roads and arteries of south Georgia, a subject to be revisited in our next chapter. He has assembled a really interesting menu to go along with Food 101’s relaunch. The result is not far removed from our city’s other “Mason Jar Places,” as they might be called. They’re featuring such neat-sounding fusions as duck confit banh mi sandwiches, shrimp and grits, lamb shanks from Grove Farms, and clams from Sapelo Island. If you enjoy the menu at One Eared Stag, or at Asheville’s Tupelo Honey Cafe, then this is probably a place that you might enjoy trying.

On Sundays, they offer a brunch that includes Nashville-styled hot chicken sliders and pork belly eggs benedict, along with their weekly barbecue specials, which reminds me of the few years that Bone Lick BBQ was rolled out at P’Cheen on Monday evenings. Chef Justin is proud of his pulled pork and St. Louis-styled spare ribs, but I was most interested in his smoked chicken wings, which are served with a white sauce. That sounds terrific and makes me consider taking a Sunday off work to come and eat, especially since they’ll be featuring live bluegrass in the dining room, but we were here for the cocktails and the separate Barrel Bar menu, and what we sampled was all really stunning in its own right. 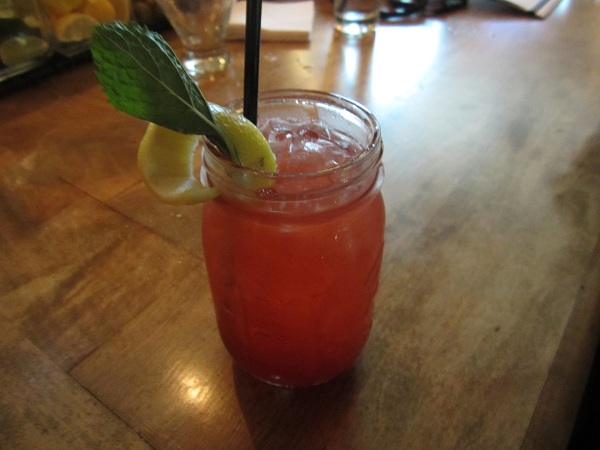 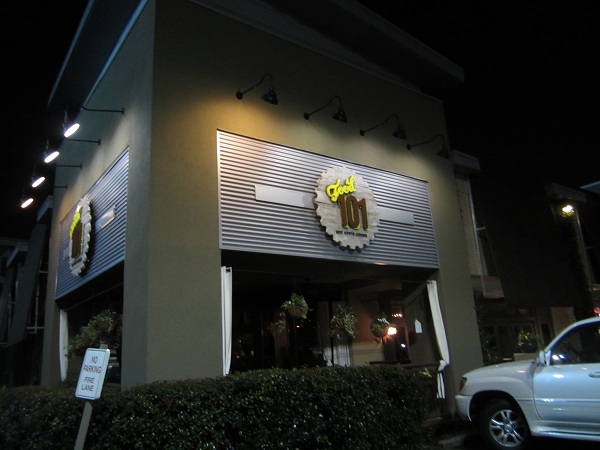 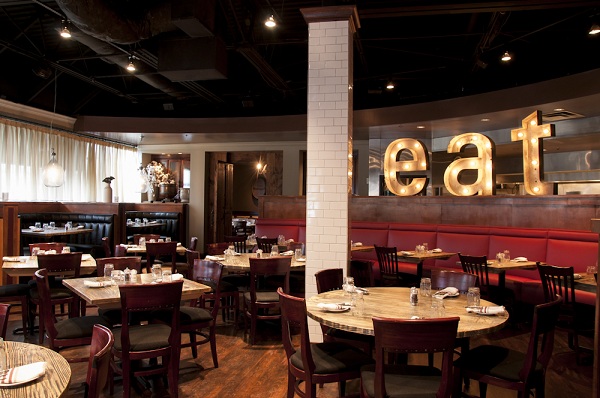 Readers will please forgive the lack of photos of the food; set up in large portions for the crowd to sample, they didn’t make for good subjects. I can tell you that we really enjoyed the fried chicken skins and the beef jerky among other great treats. Marie thought that the ribs were a little too peppery for her liking, but that put them right within my happiness zone. We also enjoyed sliders and little tuna bites, and a butcher’s block of house-cured pastrami served with a delicious and grainy brown mustard. There is also a terrific hummus made from beets and served with some terrific and salty crackers, pickles, and feta cheese. You could certainly make a case for just staying in the Barrel Bar and enjoying the snacks menu.

As for the drinks, well, Marie doesn’t indulge, and I’ve never really developed a taste for bourbon, but I did try their Buffalo Rose, which Malika from Atlanta Restaurant Blog recommended. It is made with Buffalo Trace Bourbon, aperol, mint syrup, lemon juice and raspberry puree and it was pretty good. But before I took the plunge, bit my lip a little, and tried that, I particularly enjoyed a glass of “Plenitude” from Dahlonega’s Wolf Mountain Vineyards. According to their web site, Plenitude is a blend of Chardonnay and Viognier that is aged in stainless steel to preserve the acidity and delicate flavors, and has a light taste of citrus and grapefruit. Along with Buffalo Trace, they have added an impressive list of small batch bourbons under the guiding direction of the spirits manager, JD Doyle. This is pretty far outside my area of expertise, especially when it dips into the direction of craft “shines,” about which I know nothing, but it looks good enough to warrant investigation from connoisseurs.

Food 101 has been under our radar for some time, and what reputation it does have is that it may be a more formal destination than it actually is. I wish that I had experienced the restaurant before this upgrade so that I could compare it, but thinking of it as a new place works too. It’s a great choice for anybody looking for new takes on regional cuisines, and we really enjoyed the experience.

Other blog posts about Food 101: