A couple of chapters previously, I mentioned that we had intended to visit two barbecue places on our day out to the Dawsonville outlet mall, but we were frustrated by the second one that I chose being closed for vacation. So I asked Matt, as we kicked back at his house, whether he knew where a place called Moonie’s was. We don’t yet have smartphones or any of those new-fangled gadgets, you see, and that was the first one in the Gainesville area whose name that I remembered. Of course, Matt knew exactly where it was. If it’s anywhere in Hall, White, or northern Gwinnett County, he knows about it, and he gave us quick and accurate directions to it from their place. This brought us back down I-985, sending us home down a different artery out of Atlanta than the one we used to go north.

Moonie’s opened in 2011 and desires to replicate a traditional meat market from the Lone Star State. I personally can’t vouch for its accuracy – I’ve only been to Texas once, and that was before I cared about barbecue – but Dustin, the Texas ex-pat who writes the Georgia Barbecue Hunt (linked below), says that they do it right. If that’s so, then they’re living up to the stereotype that we hear about Texas barbecue, because the beef here is very good and the pork really isn’t. 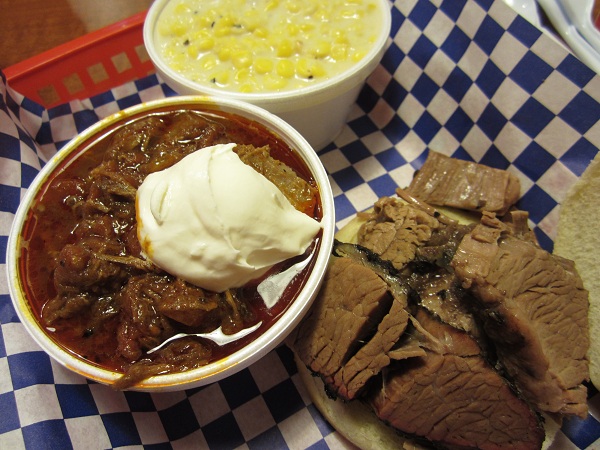 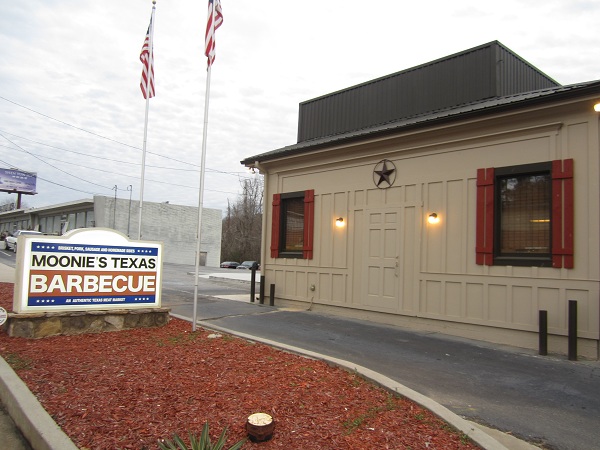 By this point in the day, the baby had been driven wild with ice cream and Matt’s menagerie of pets, and he was coming down to crash when we arrived in Flowery Branch. Moonie’s is set up in what looks like a 1980s-vintage fast food joint redesigned with TVs for sports and big ice-filled buckets of cold beer to grab while guests are in line. Ordering at the counter, there’s a choice between a traditional plate or sandwich with sides, or buying meat by the pound. They offer brisket, pulled pork, smoked turkey, ribs, or links of jalapeno sausage.

I ordered two sandwiches for my daughter and I to share, one pork and one brisket, and sides of creamed corn and brisket chili, a concoction that we very rarely see. The results were very uneven. The brisket was really good, but the pork had that unhappy South Carolina steam tray feel; it might have been flavorful and smoky at the start of the day, but as the sun set, it was mushy and bland. The creamed corn was curious and interesting. It was simply whole kernels of corn in a lightly-seasoned cream, however, it tasted quite good and my daughter inhaled it.

Ah, but the brisket chili was a very fun point of contention. Longtime readers may recall that my daughter absolutely loves Cincinnati-style chili. She’s not enthusiastic about traditional southern / southwestern Chili, and I don’t know that she’s ever had brisket chili at all before. It’s not a dish that we see at many restaurants that we visit, and while I’m certain that Moonie’s will keep their own recipe a closely guarded secret, I think that Western Horseman offers a suggestion not too disimilar from what Moonie’s delivered (without beans, of course). I enjoyed it just fine, while my daughter took one bite and had enough. She didn’t like it one bit.

Above us, on the television, the Houston Texans and the Cincinnati Bengals played for a wild card spot in the playoffs. My daughter and I debated chili while the contest played on. Cincy chili is emphatically my favorite as well, but I don’t know that I’ve ever had a bowl of chili, of any type, that I didn’t like. Apart from that white stuff; I don’t know what people are thinking there. Even as I finished the bowl with a smile, Cincinnati won the debate at our table, while losing on the gridiron to the Texans. It was appropriate, given our surroundings.

Other blog posts about Moonie’s: