We had originally planned to visit a breakfast joint called the Metro Diner in December 2011. I found it via Flavortown USA, a fan site for TV’s Diners, Drive-Ins & Dives, and saw that it is one of five Jacksonville-area restaurants to have made it to their show. We don’t get to Jacksonville very often, but it’s always nice to step away from Saint Simons for a few hours and go visit our old friend Chris. Anyway, much of that last trip had to be scrubbed, including breakfast, but this time I was determined that we’d leave the island on time and make our way to the San Marco neighborhood in the early hours and maybe even beat the breakfast rush.

Happily, with Chris there to put our names on the list and get a highchair ready for the baby, we didn’t have to wait at all. The Metro Diner has always been popular with the locals; since the restaurant’s appearance on the TV show, it’s become a spectacle on the weekends. Hour-plus waits are common. So far, the explosion of business shows no signs of slowing. The episode taped in the spring of 2010. They opened a second location the following year and a third on Jacksonville Beach in 2012. 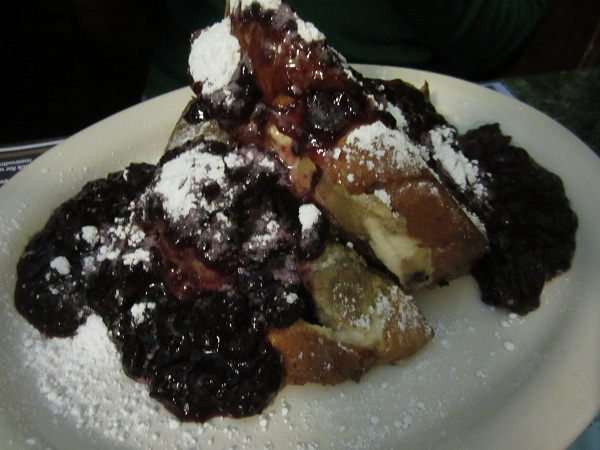 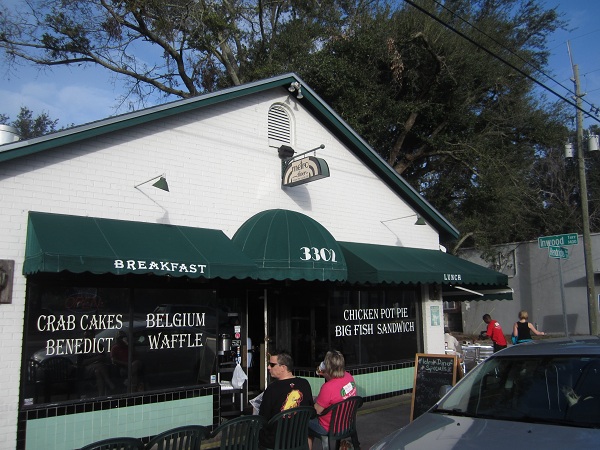 Some of my fellow hobbyists, notably Finding Florida (linked below) have observed that Metro Diner looks and feels like a proper diner from the northeast, sort of dingy and full of character even during the quiet times, as if this place ever gets quiet. Our experience with northeastern diners is really limited, but yes, this did remind us, a lot, of a place in Connecticut where we got breakfast a few years ago, only with ten times the crowd. They even serve creamed chipped beef, which we understand is popular up in those climes.

Marie and the girlchild shared an order of “Yo Hala on the Square,” which is a volcanic mess of a meal. It uses challah bread as the base for French toast, only it’s stuffed with cream cheese and bananas – “Activate da bananas,” as shouted by Guy Fieri on the episode, has become a slogan here – and then it has blueberry compote poured atop it. We didn’t get the additional strawberries as seen on TV, though, but I doubt that this gooey spectacle really needed them. I had something quite bland by comparison, a breakfast pie, which is a dish of eggs, cheese, mushrooms, onions, bell peppers, and red skinned potatoes.

We didn’t overstay our welcome. There was a mob waiting for tables, and I think we all agreed that these were among the least comfortable benches of any restaurant we’ve ever visited! We were in one of the back corner booths and every time we got up to move around, either to accommodate sharing or to accommodate the increasingly cranky baby, I felt like my spine was going to have to be forced back into shape. I wonder whether the diners in Connecticut have seats so awful?

So there are four other Triple-D-featured restaurants in northeast Florida. Maybe the next time that we have the opportunity to go visit Chris, we can stop by one of them?

Other blog posts about Metro: