It has been a really long time since I had cause to preach about one of Georgia’s few barbecue specialties, what is called Hudson’s-style sauce after the fellow who concocted it. You see, one thing that I have always disliked about the broad brush that people use when they are talking about barbecue in terms of state-by-state is that they miss out on the details. Not very many writers, to give one example, paid any real attention to the golden orange mustard sauce of Columbus and east central Alabama until the good people of the Southern Foodways Alliance looked into it. And among Georgia’s other regional treats is the black-red vinegar “juice” that Buford Hudson concocted in the early 1960s.

I wrote about this in more detail in 2010 and 2011 as I uncovered places that served it (click the tag above for more) and asked servers and owners about it. This barbecue “juice” – similar, I believe, to the way that people in Owensboro refer to their sauce as “dip” – is tangy and peppery and, unless you ask for your meat dry, your chopped pork will come drowned in it. This is not like the small ladle of barbecue sauce that many, many restaurants will drip across a diner’s order. Usually, we see these are segmented cafeteria plates and the kitchen completely drowns the meat in juice, to the point that servers are almost certain to bring it to your table with the juice overflowing into the fries or slaw in the other sections of the plate.

I think this preparation is fascinating and quite tasty, and, as I learned when I ordered a sandwich at Hog Wild in Douglasville, they’re just as happy to drown the meat in a bun as they are on a plate. 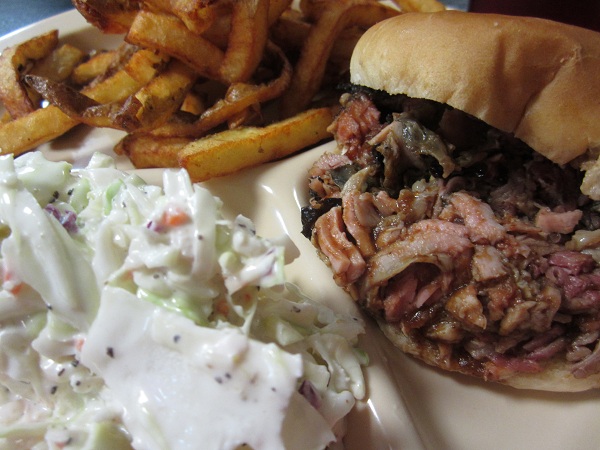 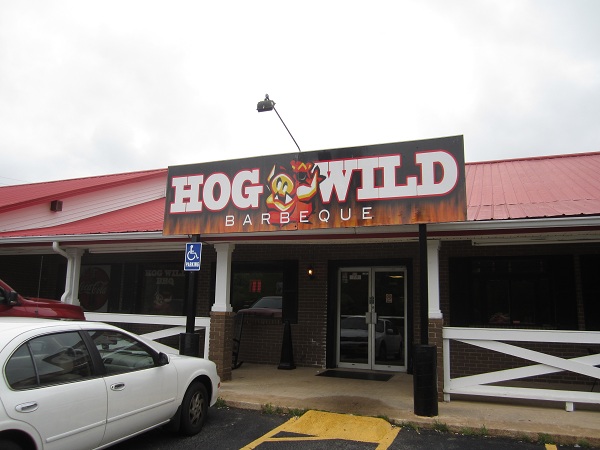 A year and a half ago, I talked with a server at Hudson’s Hickory House in Douglasville, where this style originated. Buford was in the back and not free to chat, but the young lady told me about the juice and other restaurants that serve it, and mentioned a place down the street that I had not heard of as another source for it, whose owners mixed it up with Hudson’s permission. At the time, Urbanspoon did not have a listing for Hog Wild, although there either is or was another place then with that name in Carrollton, but I found them on Facebook and, eventually as these things go, made my way out there to sample a little more. Our server told us that several employees of Hog Wild once worked at Hudson’s Hickory House.

Matt and Kelley and I arrived a little after two and had a very good meal that was much as I expected. Many of the same hallmarks of the Hudson’s style that are also seen at Wallace and Johnny’s and Briar Patch are also here – smaller combos called “thrift plates,” hand-cut floppy fries, that bottle of lethally hot cayenne-freckled mustard sauce – and the service is very good. The truly strange part of our meal was realizing that one wall in the dining room, underneath one of the TVs – is it absolutely necessary to have Fox News on both, guys? – was actually a bank of black freezers and refrigerators, from which our server extracted a bag of frozen pickles to carry back to the kitchen.

The most interesting thing about the meals at these restaurants is that they always leave me wanting more. I just finished a sandwich with this excellent meat and juice, and on the way back home via I-20, I was asking myself when I could get back over to Wallace, the restaurant where I first sampled the style, many years back. Of course, it also leaves me ready to look for more places that might serve it.