Readers of many of the other food hobbyists in Atlanta have probably realized that our city is home to a handful of Ethiopian restaurants, but we were surprised to realize that almost all of them are located in one place. The old Williamsburg shopping center at Clairmont and Briarcliff has taken the nickname Ethopian Corner, because there are at least three places here – Meskerem, Ledet, and Dosta – which is kind of strange, when you think about it. Meskerem has been around since 2005 and, of the three, our friends Adam and Emily of Spatialdrift enjoy this one the most. They invited us to tear some injera with them here and we were happy to go in the company of people who knew what they were doing. If we’d have gone on our own, we’d have probably sat looking longingly at the food before flagging down a server and asking for some silverware.

At Meskerem, the food is brought out family style on a large tray lined with a spongy bread called injera, and they also provide a few extra rolls of this to get guests started. You’re meant to tear off a small portion of your roll and use that to grab your food. I won’t swear that I was sold on this being the most sensible way to eat, but we all really enjoyed what we ordered. 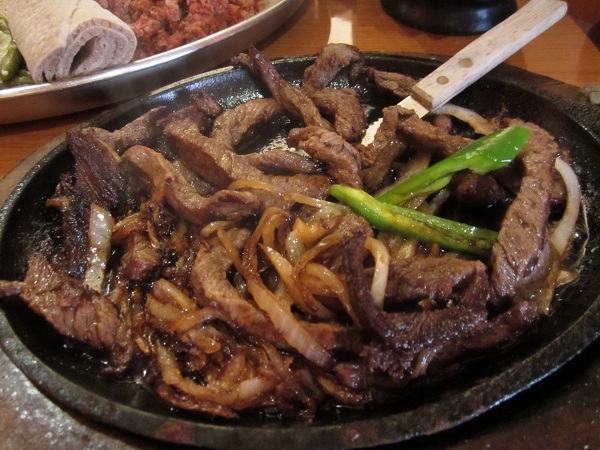 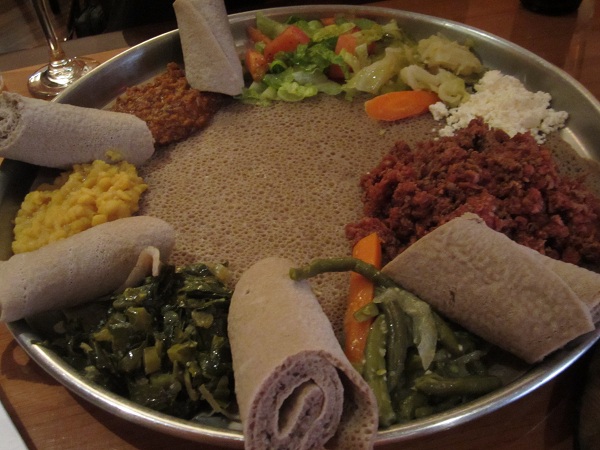 We decided on four entrees to share. These were kitfo, finely chopped lean beef mixed with spiced butter and an orange spice of chili and cardamom seed called mitmita, zilzil tibs, which are more mildly-seasoned strips of beef cooked with onions and green peppers, and shiro wot, which is a completely awesome chickpea stew. The fourth entree was a veggie combo that included misir wot, which are lentils cooked in a red pepper sauce, kik alicha wot, which are split peas cooked with garlic, onions, and green peppers, gomen (collards), and a small salad.

I think that we ordered really well, because we had lots of really interesting flavors that complemented each other very nicely. All of the dishes were very flavorful, and while I was not really taken with the kik alicha wot, there was more than enough to make up for it. The misir wot was my favorite, followed by the kitfo, which was quite spicy. 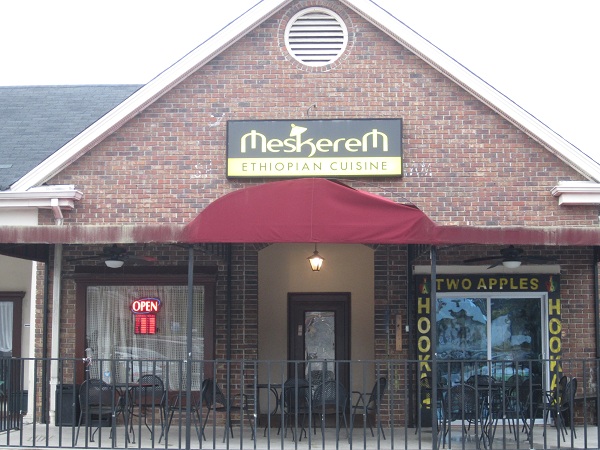 We had an absolute ball kicking back and talking about everything under the sun, but eventually, Marie started getting a little squirmy. It was not just that she was missing the baby, but Meskerem is split into two sides. There’s a dining room to the left and a lounge to the right, and, after a couple of hours, the smell of hookah began drifting into the dining room. Marie was torn between learning more and more about a time travel film called Primer that our friends enjoyed, and getting back out into the fresh air; she can’t stand scents like that, or incense, or cigars. Eventually, I had to call a halt to the discussion and get this poor mommy back to her baby before she choked to death, and before they spoiled the movie for me.

We never see movies anymore; we have a toddler, there’s simply no time for those. But one day, I’m gonna want to see this movie.