This is Marie, writing about a recipe inspired by a purchase from our local farmer’s market. One of the booths had a large display that called out to me – it was a row of baskets containing multicolored very small fingerling potatoes. I was thinking of cooking them as a side for meatballs (next time maybe…) but the merchant mentioned that they had used them for red, white and blue potato salad – and this being the weekend before July 4th, it made perfect sense. I don’t usually make potato salad, out of deference to Grant’s decision to cut it (tragically, and much missed) from his diet, but declared that this was a special case and he conceded.

Most Southern potato salad recipes call for the potatoes to be boiled while the rest of the salad is being prepared so they can be combined while the potatoes are still warm, but I decided after examining the skins on the potatoes that they really did need to be peeled, and that meant they had to cool. So to save time I cooked them on the 3rd. They peeled beautifully and very fast. The colors showed up much better after peeling, too. My little guy insisted on trying one with the skin on (it went straight into the trash afterward) but the peeled and sliced potatoes were irresistible. He kept coming back for one more more “bite, mommy!” He appeared to like the blue ones best. The potatoes were so small the biggest of them made no more than four pieces. 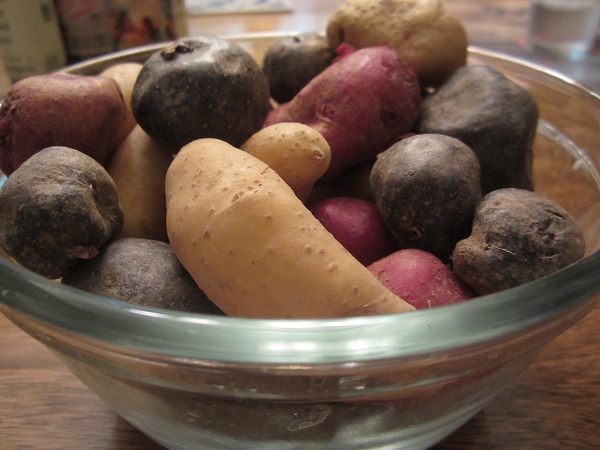 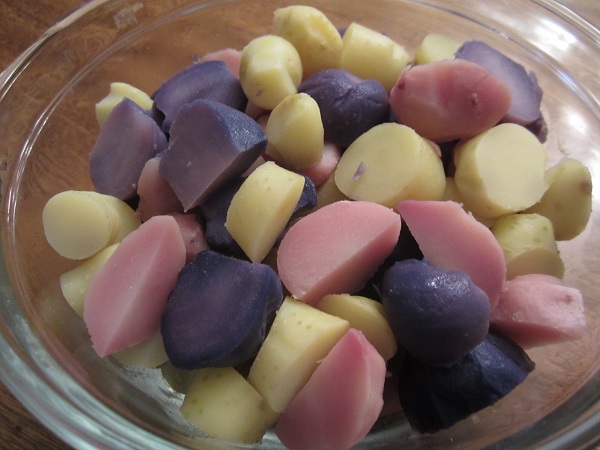 There are essentially two ways to make a dish. One is to follow a strict recipe with measured ingredients added in strict order. For instance, bread is a chemical formula – get it wrong and you’re lucky if it’s even mediocre. However, some things like potato salad have so many variants, and the main ingredient has such a variability in quantity and type (even discounting any poaching that goes on ahead of time) that you really do have to throw things in “to taste” rather than by specific quantities. I used the version of potato salad that has white wine vinegar, a little chicken broth, mustard, salt and pepper, finely diced red onion, some sweet relish, and lots of egg. Honestly if I made this again I’d use three eggs instead of two. I should have used more mustard, too. I’d kept the amount low because the teenager is not fond of it (and I sympathize to a degree, but there are places where it really does belong). The different colors of potato really did have subtly different flavors and they could have stood up to a more robust dressing. People who do not dislike bacon as much as I do might like to substitute bacon fat for the broth.

With any luck the next time I am able to get to the market they will still be selling the fingerling potatoes to be used with other recipes. I’d love to fiddle and fine-tune and see whether the potatoes can be peeled while warm without either falling apart or scorching my fingers, for instance. However, out of deference to our long-suffering pants buttons, we shall allow our readers to experiment instead. Go find some of these potatoes and share what you find! 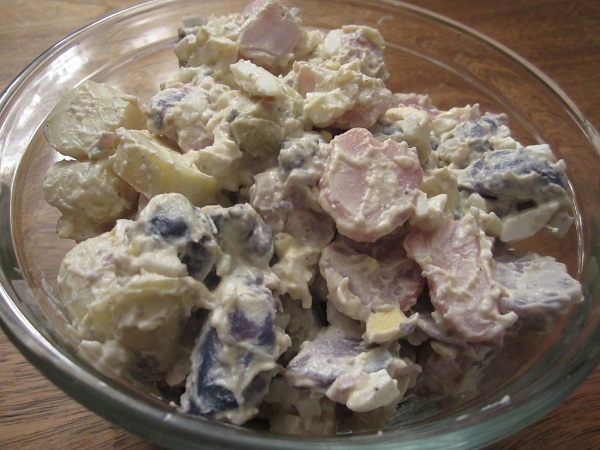 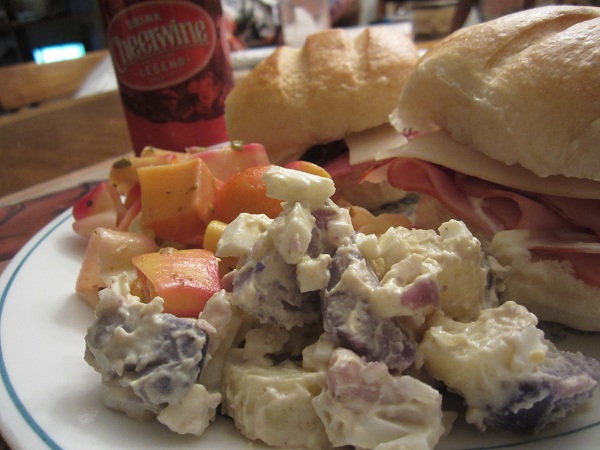