We had a nice and long Baby Mercy Break after sharing an order of nachos in the early afternoon in downtown Asheville. We did lots of shopping at some favorite stores and, crucially, let him rampage and read at the Pack Memorial Library. The staff was completely wonderful, and let us stretch and relax and have books brought to us. Have to say, our son seems to suffer from sensory overload in libraries. At home, he patiently follows along with most books and immediately asks to hear them again. Whether we’re at home or in another library, however, he can’t go much more than four pages before rushing away to find another book to start anew.

A few hours later, as the sun began to set, we returned to the parking deck with our clothes and chocolates and drove over to Asheville’s River Arts District. Many years previously, a number of abandoned factories and industrial warehouses overlooking the French Broad River became home to a thriving community of artists, who turned them into dozens of studio spaces. Restaurants soon followed. Without specifically intending to, we ended up selecting two popular restaurants owned by the same couple. I picked the White Duck Taco Shop for a snack and Marie wanted to make their sister restaurant Pizza Pura the last stop of the day.

Just as downtown had been packed about to capacity with spreadheads in town to see Widespread Panic, the River Arts District was packed with people taking one of the area’s twice-annual Studio Strolls, when everybody is open late, and often throwing receptions to show off their newest works. Parking at both places was a little difficult, and both restaurants were very busy. There is seating here for about forty inside and forty on the patio, which was getting a little cool and chilly, but that’s all that was available. Incidentally, the owners are very serious about not parking some of your party at a table and sending somebody to the line to order the food. Everybody wants to eat here, but nobody gets to jump ahead.

White Duck Taco Shop opened in May 2011 in the Hatchery Studios building. Laura Reuss and Ben Mixson, late of Park City, Utah, named the place after Laura’s nickname. She was coined the White Duck for constantly, incessantly, talking in the kitchen of a previous chef’s business. 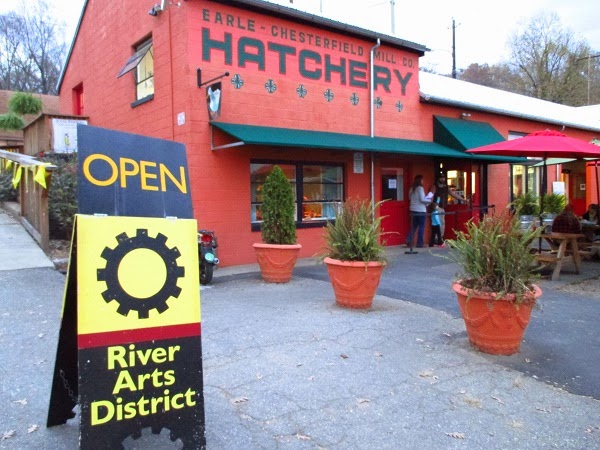 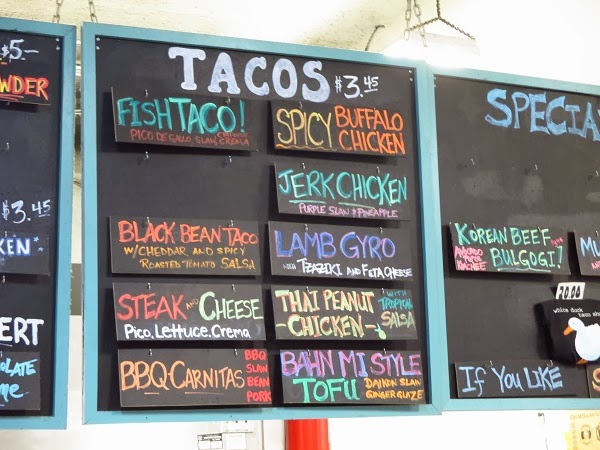 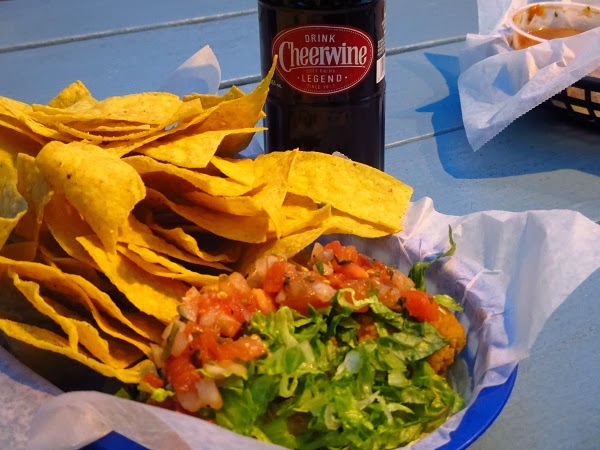 As you might expect from a restaurant in this community, Reuss and Mixson pride themselves on local and fresh ingredients with a fun and silly flair. $3.45 is certainly on the higher side for a taco, but I don’t recall the last taco I had that was so overflowing with ingredients. Since we had plans for pizza, I figured we would each just order one, but my daughter decided that she’d rather have a side of cheese grits, and Marie demurred completely. So I had a bottle of Cheerwine, chips, and a buffalo chicken taco.

I was really impressed. Nodding and eyes wide as I tried to maneuver the giant, tasty thing and keep from spilling, I made enough of an obvious show of appreciation that Marie said, “If we do move here, you’re going to eat here all the time, aren’t you?” Well, possibly not all the time, but Reuss and Mixson have developed a large menu of so many distinctive ideas that everything sounds so promising. I was sorely tempted to rejoin the long line and go back to the counter for another, but other really good food was waiting. This place is definitely on the list for another visit.