In the 1960s, as fast food really began to take off, every business owner was looking for an angle. In Jacksonville, a fellow named Tarzan Akel came up with a winking little way to get attention. Several of the area’s delis had been building sandwiches in pita bread for a few years, looking to win the attention of the city’s large Arabic population, and he decided to go full-bore into middle eastern imagery. In 1965, he opened the first of what would be a six-store chain called The Sheik, specializing in a pita sandwich filled with ham, salami, bologna, cheese, lettuce, tomato and onion, along with a special sauce. It’s called a camel rider.

Some people perceive that name to be more than a little culturally insensitive, and while many restaurants in Jacksonville have followed Mr. Akel’s lead and offered their own take on the sandwich, some businesses have, over time, stopped using the name and wish that the term camel rider would remain in the 20th Century. These sandwiches have made their way to a few other places in the south. I dropped our old friend Matt a line, and he tells me that in Columbus, Georgia, you’ve been able to get a camel rider at a popular Mercury Drive bar and grill called Speakeasy since 1976.

Back in Jacksonville, the Whiteway Delicatessen, which dresses some of their pita sandwiches with hummus or tabbouleh, is one of those that abandoned the name. This place originally opened in 1927, and it would have been our first stop on this trip to Jacksonville, but it is closed on Saturday. (So is the city’s monorail, which we’d have loved to show the toddler. Next time we come to Florida, we’ll come on a Friday!) Whiteway is a more traditional sandwich shop, but the Sheik is a lot more like a standard fast food burger place. Riders make up about a third of their business, with hamburgers and breakfasts equally popular. 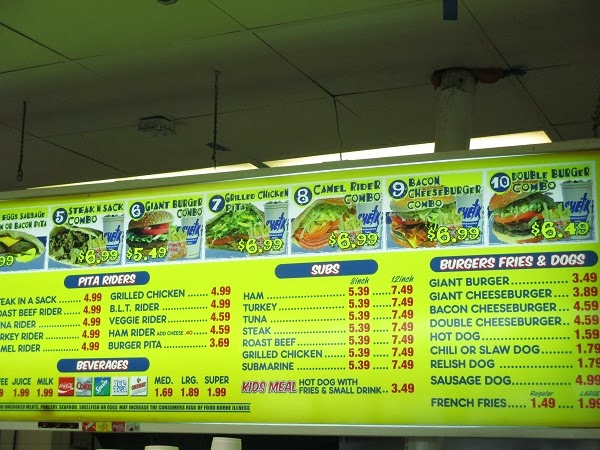 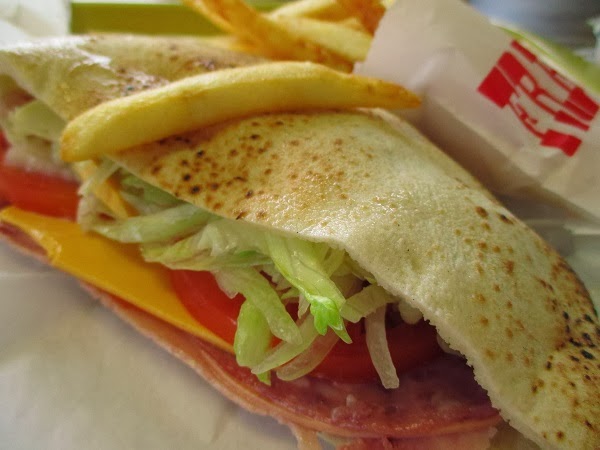 Several online sources report that there were six Sheiks at one time, but Urbanspoon lists just four today. We went by the location on Atlantic Boulevard. The original store is apparently on North Main, but the east side of town was better situated for some baby-friendly activities, so we chose this one. 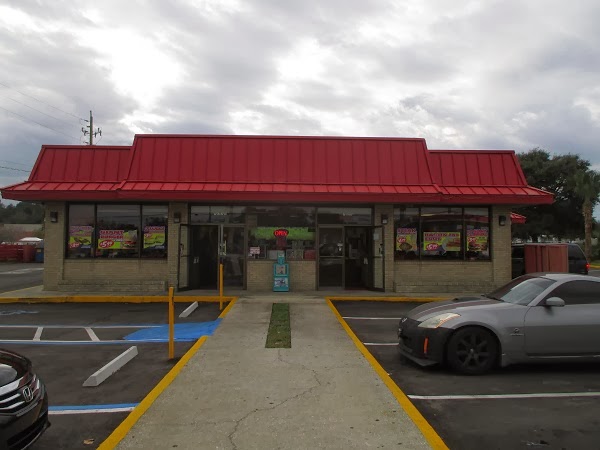 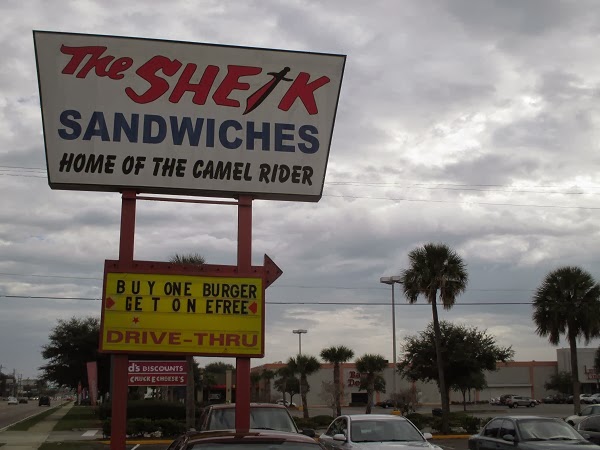 The other ubiquitous Jacksonville specialty that you can get at The Sheik is a cup of cherry limeade. Interestingly, when we met Robin Sorenson of the Jacksonville-based Firehouse Subs a year or so back, he told us a great story about his store’s cherry limeade getting tested and retested by the people at Coca-Cola, trying to win a contract with his restaurant by offering it as a fountain option, and, later, in the Freestyle machines. He also told us that, as they were developing the menu for Firehouse, they visited as many sandwich shops in the city as they could. Now that we’re learning a little more about the culture of the River City, it does make sense that Firehouse would want to take their cherry limeade to all of their stores. It’s a drink that so many area businesses offer with sandwiches that Firehouse would be less of an ambassador without it.

As for The Sheik, I think that we were charmed by the old-fashioned fast food building and the excellent staff, but the power of this restaurant’s camel rider has been somewhat overstated. Marie and my daughter both ordered breakfast instead, so we can’t give you a more detailed opinion of the various rider sandwiches, including the almost-as-common “steak in a sack.” But for me, this really was a below average early lunch. Sadly, none of the meats or vegetables in the pita were very good, with the Weinermobile-quality bologna dominating the other ingredients.

I’m still curious to try some of the pita pockets at the other sandwich shops in the area on a future visit – see the links below – but the best thing about this little exploration was taking that refill of cherry limeade with me to sip on for the next couple of hours.

Other blog posts about camel riders:

John T. Edge’s chapter in Southern Belly first let me know about this regional specialty. Edge revisited the subject for this 2012 New York Times article. In 2010, however, the blog viCARIous penned the hands-down best exploration of camel riders. In this awesome post, Cari visited nine delis in the Avondale area, with lots of pictures and detail. Terrific work, that. It should inspire all of us doing restaurant blogging to buckle up and do that level of research.