There’s a place in Gwinnett County that I almost went to visit one day in late October. Review Atlanta had written about Tipsy Pig in Lilburn and made it sound very promising. However, it is so far off the beaten path as to be just about halfway to Athens. I decided to set it aside until the next time we were heading to the Classic City. Since Tipsy Pig is, happily, open seven days a week, we could even go on a Sunday.

That’s what we did shortly before Christmas. They’re releasing those Hobbit films that Marie enjoys every December, and she has several friends in Athens who enjoy them, so it’s starting to be an annual tradition that we go there and celebrate one of her old friend’s birthdays with a movie. Well, they all celebrate it with a movie, and the not-ready-for-theaters toddler and I find something fun to do. We left our house a little after ten and got to Tipsy Pig just before eleven. It’s in a Shell station at the corner of Five Forks-Trickum Road and Oak Street. 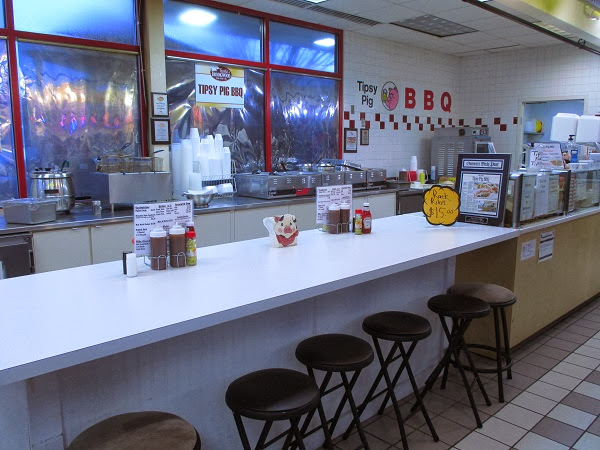 Terry and Dale Lee opened Tipsy Pig in the spring of 2010. Previous to that, Terry had worked at one of the area Famous Dave’s, before that chain left the Atlanta market, and then the Lilburn location of Spiced Right. Marie and I had something like our usual order. She had a pulled pork sandwich with fries to share with the toddler, and I had a plate with Brunswick stew and cole slaw.

It’s a shame that this is so darned out of the way that people in Cobb or inside the perimeter won’t get out here very often. This is very, very good meat and excellent homemade sides. I liked the slaw and stew a lot, and I apologize for not providing a photo of my plate. I am still getting used to this temperamental camera and its light settings, and sometimes do not notice my mistakes until it is too late. This is good, brown and pink meat that tastes quite smoky and with just a little moisture. There are mild and hot brown-red Memphis-style sauces to accompany the pork. As is often the case, Marie preferred the mild and I liked the hot better.

We didn’t notice the small sign advertising a Redneck Cuban sandwich until we were into our meal. Terry told us that he got the idea from Bobby Flay. Flay apparently showed off the idea on a 2008 episode of his show Grill It!, and it’s a traditional Cuban sandwich made, not with roast pork, but with smoked and pulled pork. That sounds terrific. Have any of you tried it? Let us know how it is!